Hello and welcome to the 547th installment of the SWD.

Within the scope of the second phase of the Resistance of the Age in occupied Afrin, our forces carried out two successful operations in the Afrin city center and its surroundings, targeting the Turkish invasion army and its jihadist mercenary allies. The details concerning the results of actions are as follows:

1. On September 13th, our forces targeted a joint patrol of Turkish soldiers and its jihadist mercenary allies on the road between the Tirinde neighborhood and the al-Maqla area, near the Afrin city center. As a result, two of the Ahrar al-Sham mercenaries, one of them called Mustafa Muhammad Ali, were killed, while three Turkish soldiers and one mercenary were wounded.

– On the same day, our unit targeted a patrol of mercenaries of the so-called Military Police in the Tirinde neighborhood in the center of Afrin. As a result, two mercenaries were killed and four wounded.

2. At the same time, one of our units carried out an action against the group of mercenaries in the ​​Afrin city center. As a result, two mercenaries, Abdulrahman al-Kurdi and Fahd al-Darwish, were killed.

Rebel shelling of Al-Khalidiya neighborhood of Aleppo city reportedly killed one and wounded ten civilians, according to the Syrian Arab News Agency.

The battles and clashes between our forces and mercenaries (Daesh) continue in the framework of the battle to defeat terrorism, where yesterday witnessed violent clashes.
1. On the axis of Al-Bagouz Fawqani village, the mercenaries targeted the positions of our forces that had been liberated the previous day. The International Coalition carried out rocket attacks targeting mercenary artillery. The artillery of the Coalition also carried artillery shells at the positions of mercenaries. To destroy an armored military vehicle.
– During direct clashes on this axis, one of our fighters rose as a martyr.
– Yesterday evening, our forces carried out an attack on Al-Bagouz village and concentrated in 5 points, so that the fighting has moved into Al-Bagouz, and in these clashes one of our fighters was wounded.
2. On the axis of Sousse: military activities confined this axis to the mutual shelling of medium machine guns in the morning and afternoon hours, as our forces advanced and clashed with the mercenary face to face in the evening hours, resulting in the progress of our forces by 1 km, while the mercenaries returned the opposite attack, Car bomb and recovered the points that had been liberated by our forces, these clashes continued at night and our forces were able to achieve progress again and the expulsion of mercenaries inside.
3. This day’s battles led to the destruction of a command post in the village of Al-Shafa, the bombing of the air force, the killing of two mercenaries, the killing of 13 mercenaries in the vicinity of Al-Bagouz and the destruction of an observation post on the perimeter of the village. 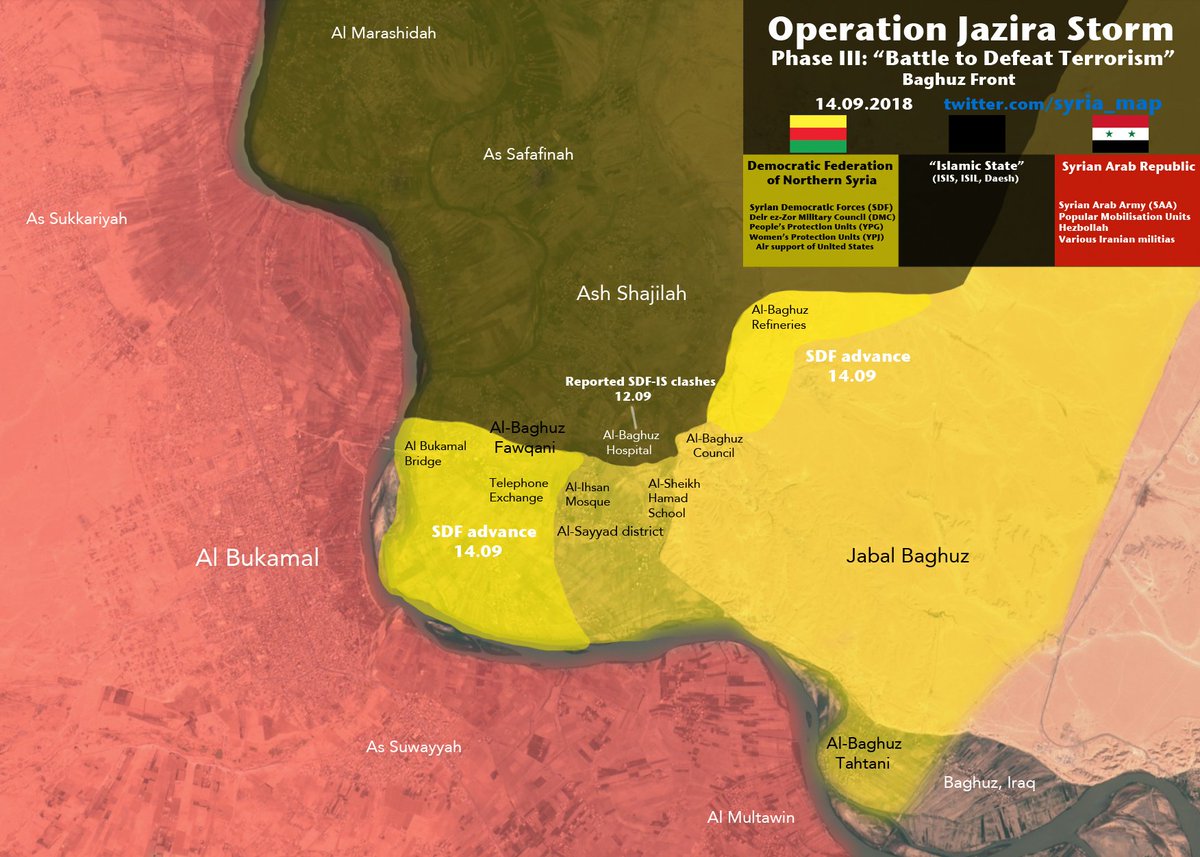 Afghan National Security Forces killed two and arrested one element of the Islamic Emirate of Afghanistan in Saydabad district.

Afghan National Security Forces reportedly killed 29 and wounded two elements of the Islamic Emirate of Afghanistan, as well as destroyed a vehicle in Andar and Muqur districts.

Afghan National Security Forces killed 15 and wounded 21 elements of the Islamic Emirate of Afghanistan, as well as destroyed five motorcycles and two vehicles in Pusht Rod and Shib Koh districts.

Afghan National Security Forces killed four and wounded one element of the Islamic Emirate of Afghanistan, as well as destroyed a vehicle-borne improvised explosive device, a motorcycle, and several weapons depots and ammunition caches in Washir and Nad Ali districts.