Hello and welcome to the 483rd installment of the SWD.

Unknown gunmen reportedly killed three civilians on the road between Al-Hasakah and Al-Qamishli.

Improvised explosive device targeted a vehicle of Hayat Tahrir al-Sham’s judge and ‘Dean of the Faculty of Sharia and Law in the city of Idlib’, Anas Ayrout near Saad mosque in the city of Idlib. Ayrout and three other individuals were wounded, while one individual was killed in the incident.

“In the first action our forces carried out on July 9, the Faylaq Al Sham member Ibrahim Ebdullrezaqi was targeted. The gang member was in motion on a motorcycle when he was punished by our forces for his torture and attacks against the people of Afrin, following a pursuit.

The second action of our fighters was carried out on July 10 against a military vehicle with 4 Faylaq Al Sham gang members inside. Gang members named Hisên Îbrahîm Mustefa, Mihemed El-Kermo, Eymen El-Xalid and Xezwan El-Hisên have been killed in the targeted vehicle.

The actios in question took place in the southern rural areas of Idlib. This goes to prove that we are present everywhere the Turkish state and their allied gang groups invade, terrorize and oppress our people. We repeat our promise once again to hold anyone who took part in the invasion of Afrin, who insulted our people and stole their property to account. Be patient, Afrin. Vengeance is near.”

Syrian Arab Army and allies entered Al-Muzayrib and Al-Yadudah, as well as rebel-held parts of the city of Daraa, after rebel factions in the aforementioned localities decided to reconcile with the Syrian government. Rebel factions in Inkhil and Kafr Shams accepted reconciliation with the Syrian government as well. Syrian Arab Army is also in control of Tell Antar and Tell al-Alaqiyah northwest of Kafr Shams. 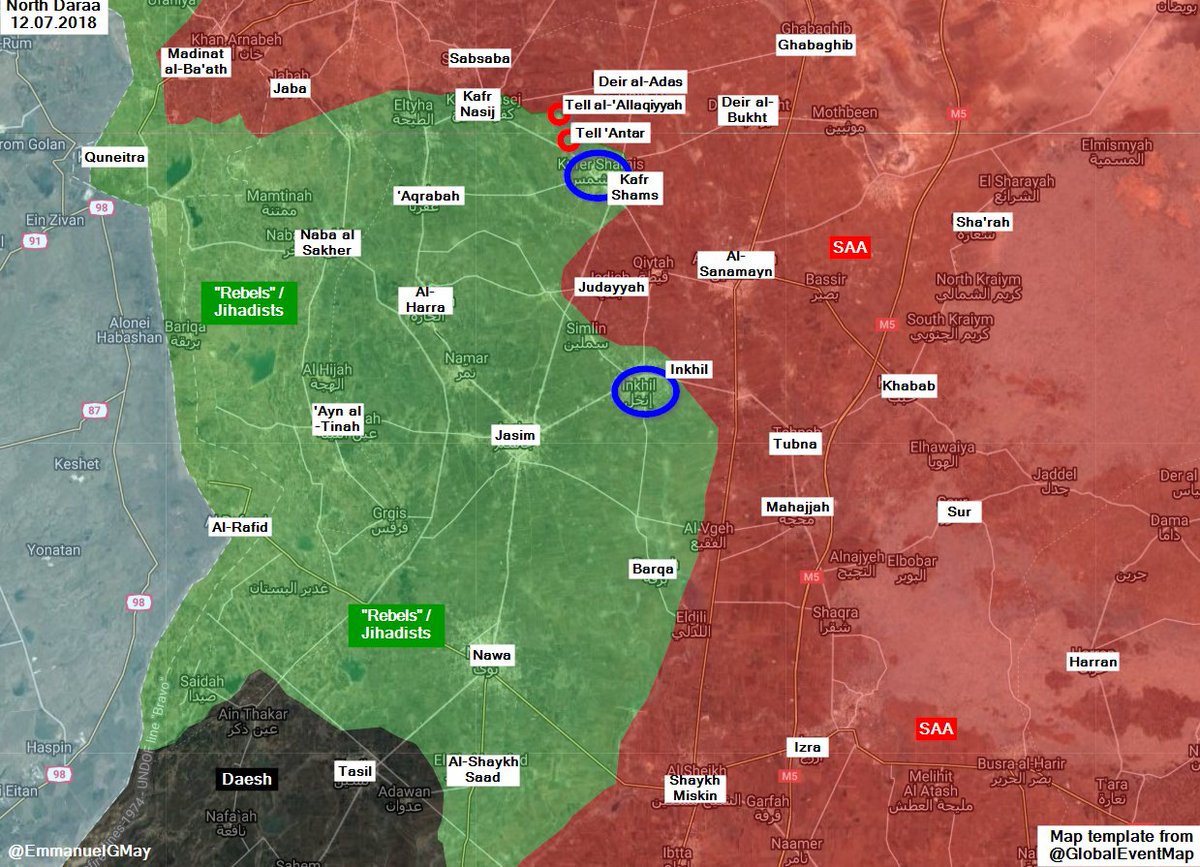 Islamic State-affiliated Jaysh Khalid ibn al-Walid captured the village of Hayt from the Free Syrian Army and rebel ‘Sad al-Bagha operations room’, after the latter withdrew from the locality in an agreement with the former. Jaysh Khalid ibn al-Walid managed to fully besiege Hayt village yesterday after capturing Tellat Yabla (Khirbet Yabla), forcing the rebels to accept an evacuation agreement from the locality. According to the agreement, the rebels handed over their heavy weapons, in exchange for the safe withdrawal from Hayt. 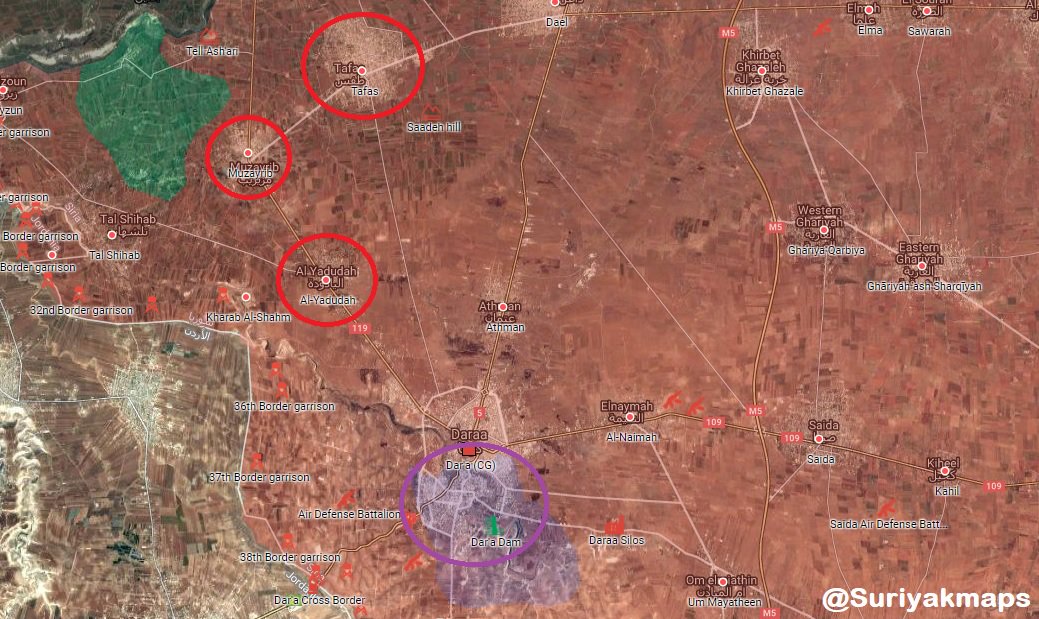 Approximate situation around the city of Daraa. Source: Suriyak

Islamic Emirate of Afghanistan’s Al-Emarah News stated that the group launched coordinated attacks against the Afghan National Security Forces in Pol Saifuddin, Jamal, Kamal, and Bahlol areas of Archi (Dasht-e Archi) district. According to Al-Emarah News, the group overran an Afghan National Security Forces’ military base and 15 checkpoints in the aforementioned areas, allegedly killing 72 elements in the process, as well as destroying eight vehicles. Afghan National Army stated that 15 of its elements were killed in clashes in Dasht-e Archi district, while 50 elements of the Islamic Emirate of Afghanistan were killed and wounded in the same clashes.

Afghan National Security Forces killed 49 and wounded 27 elements of the Islamic Emirate of Afghanistan in Nawa, Jaghori, Qarabagh, and Ghazni districts, according to the Afghan Ministry of Defense.

Afghan National Security Forces killed 11 elements of the Islamic Emirate of Afghanistan and destroyed a vehicle in Bala Buluk district.

Afghan National Security Forces killed 23 elements of the Islamic Emirate of Afghanistan in Marjah and Jerashk districts, according to the Afghan Ministry of Defense.