Hello and welcome to the 279th installment of the SWD.

Improvised explosive device in Darat Izza targeted a vehicle belonging to the head of the guidance division in directorate of education (Syrian Salvation Government), Qassim Mustafa al-Helou and killed him. The explosion took place at one of the squares in the city, also wounding two civilians.

Hayat Tahrir al-Sham raided civil court in the city of Saraqib, arresting Khalid al-Najjar, assistant judge in charge of the court and confiscating the court’s documents belonging to the Syrian government. The court is used to settle personal issues and issue marriage contracts, family books, birth registration, and real estate registration. The court’s employees are still receiving salaries from the Syrian government. Source from Saraqib said that the point of Hayat Tahrir al-Sham’s raid was not to destroy the documents, but rather to confiscate them.

Official spokesman of the Free Syrian Army’s Jaysh al-Izza, Captain Mustafa Maarati denied participation of any other group in the group’s attack on Al-Zilaqiat and Zalin checkpoint yesterday, even though Jaysh al-Ahrar confirmed its participation in the attack. 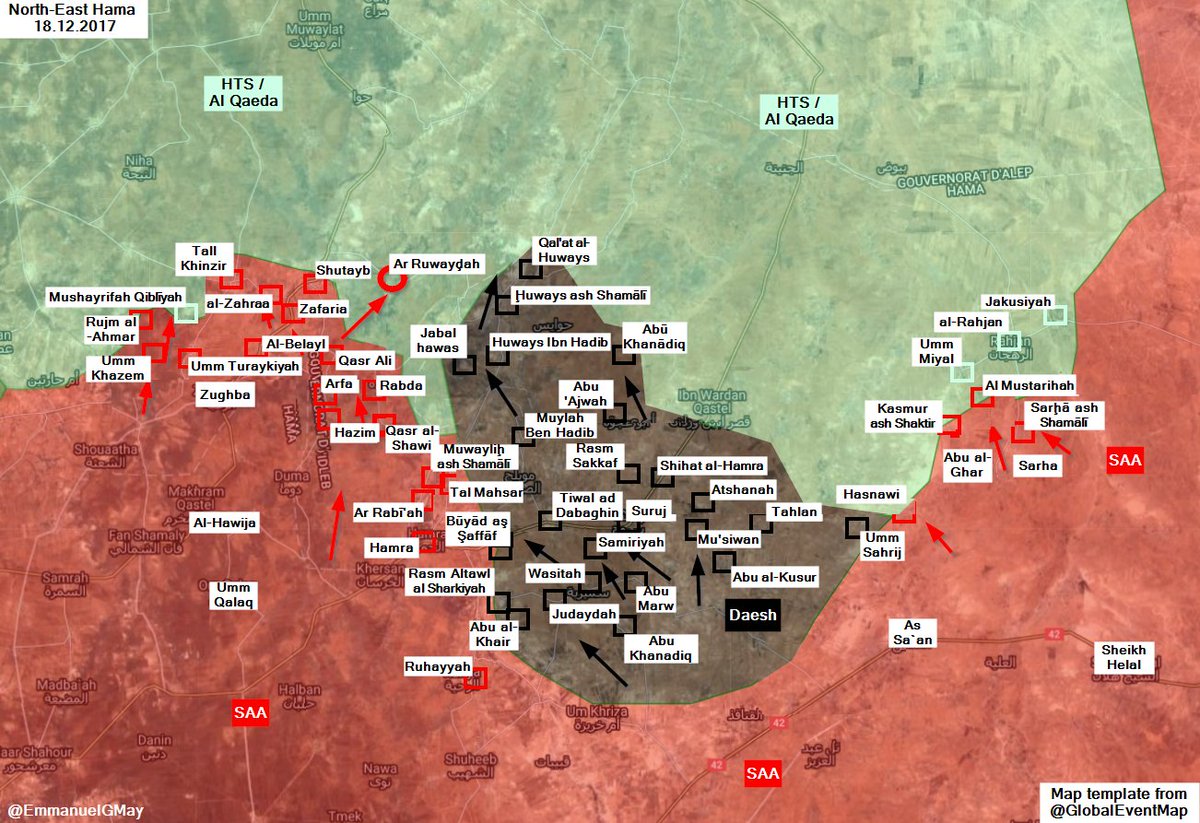 Syrian Democratic Forces and Islamic State clashed near Al-Jaradhi al-Sharqi village, and according to the latter’s news agency, five SDF‘s elements were killed and two wounded in the clashes.

Syrian Arab Army reportedly captured Tell Marwan from the rebel Jabal al-Sheikh operations room, south of Mugh al-Meer in Beit Jinn pocket. Reports suggest that the capture of the aforementioned hill forced rebel forces to open negotiations with the Syrian government, reportedly regarding the evacuation from the pocket.

Afghan National Security Forces arrested a fighter of the Islamic Emirate of Afghanistan in Nijrab district.

Afghan National Security Forces conducted operations against the Islamic State in Khogyani district. The operations resulted in death of five and injury of nine Islamic State’s fighters, as well as in destruction of several weapons depots and ammunition caches.

Afghan National Police’s commander of Ab Kamari district, Abdul Rasoul Sqandari was ambushed and killed by the fighters of the Islamic Emirate of Afghanistan in Haft Shahid area of Ab Kamari district. The ambush took place as the ANP‘s elements were on their way from the 7th station towards a checkpoint attacked by IEA. Four elements of ANP were also wounded in the ambush. IEA took responsibility for the assassination and stated that the fighters seized an armored vehicle, two assault rifles and a pistol.

Afghan National Security Forces’ operations against the Islamic Emirate of Afghanistan in Andar district, resulted in death of nine and injury of ten IEA elements.

Four elements of the Afghan National Police, including a commander Ibrahim, defected to the Islamic Emirate of Afghanistan in Janikhel district.

Between the 15th and the 17th of December 2017 CJTF-OIR has conducted 16 strikes in Syria. CJTF-OIR‘s main focus in Syria at the moment is Deir al-Zour-Albu Kamal region where they did 16 strikes supporting SDF‘s operations against IS destroying four IS vehicles, two logistics centers, an IS headquarters, a fighting position, an explosive hazard, and an IS-held building.