Hello and welcome to the 633rd installment of the SWD.

Within the scope of the second phase of the Resistance of the Age in occupied Afrin, our forces carried out three successful operations, targeting the Turkish-backed terrorists in Afrin city center and in the villages of Afrin’s Jinderese and Bilbile districts. Details of the actions are as follows:

1. On December 7th, one of our units carried out an operation against a military vehicle of the Ahrar al-Sham mercenaries in Deirbalut village of Afrin’s Jinderese district. As a result, two terrorists were killed.

2. On December 8th, our forces carried out another operation, this time targeting a military vehicle of the Ahrar al-Sharqiyya mercenaries in Afrin city center. Although the terrorists suffered casualties due to our action, the number of killed and wounded could not be clarified.

3. On December 8th, our forces carried out an action, targeting a military vehicle of the Sultan Murad Division mercenaries on the road to Sheikhourze village of Afrin’s Bilbile district. As a result, two terrorists were killed.

Hayat Tahrir al-Sham arrested a media activist from the East Ghouta, Muwafaq al-Najjar (Abu Imad) on unknown charges in the city of Idlib.

1-Bagouz axis: The engagements between our fighters and Daesh terrorists continued in this area, and our fighters were able to advance 1 km and install 16 points, and due to these engagements, a number of terrorists were killed, others were wounded, while the rest fled.

In the evening, engagements continued on several points in this front, where the terrorist organization tried to regain the points and areas that they lost, and due to that number of terrorists were killed. Our forces advanced more than 1 km, and managed to install 14 points. And to enable its defenses to repel possible terrorist attacks.

The engineering units of our forces dismantled a number of mines that laid by terrorists.

Hajin axis-In the early hours of the evening, our fighters launched a violent attack on the terrorists’ positions and fortifications. They were able to make good progress in this area; 35 points were installed and a number of mines were detonated and dismantled that laid by the terrorist organization in the area. 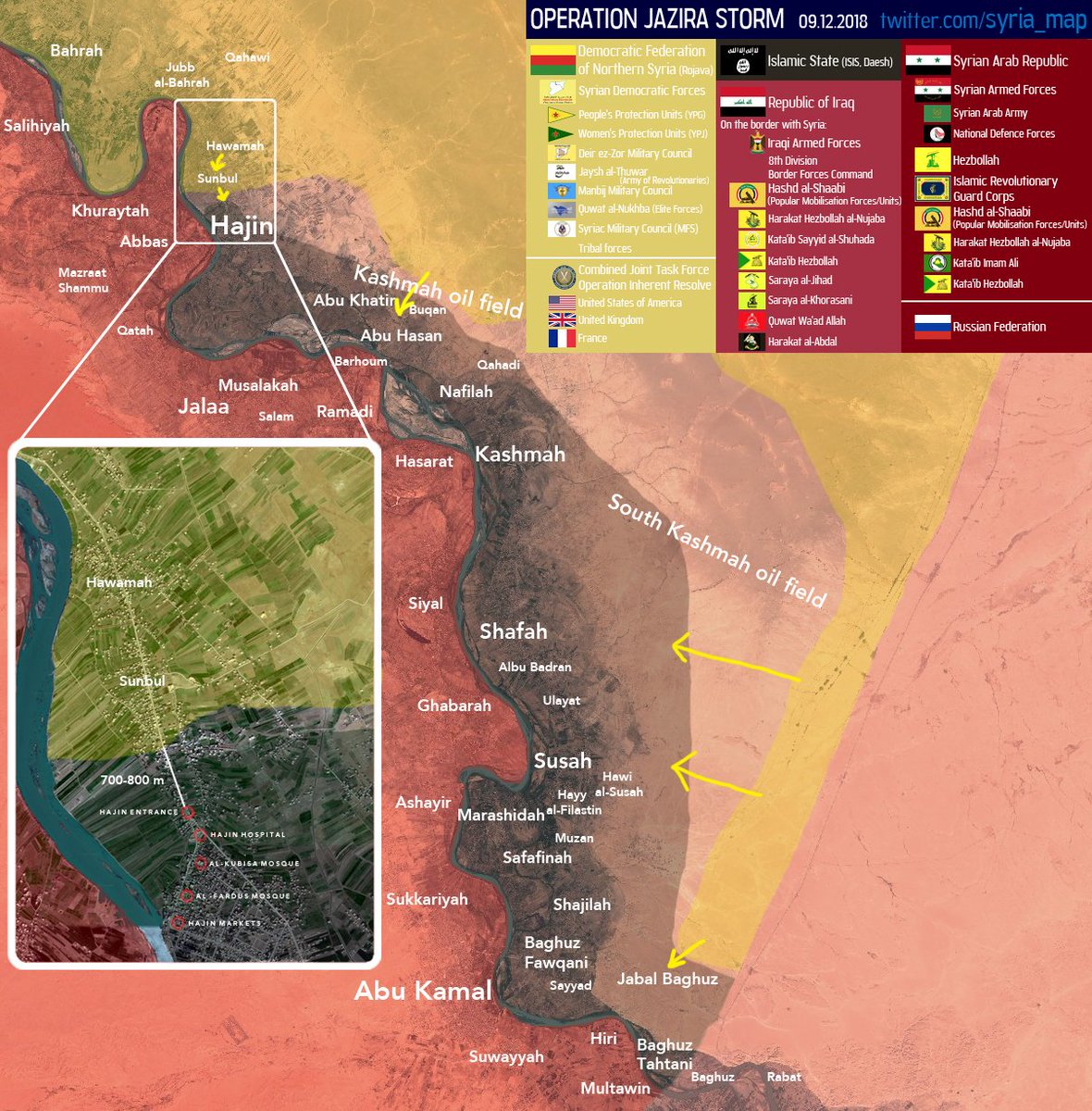 Unknown gunmen killed a former commander of the Free Syrian Army, Mashour al-Kanakari in the city of Dael, north of Daraa.

Islamic Emirate of Afghanistan’s (Taliban) Al-Emarah News stated that ten elements of the Afghan National Army surrendered to the group with their weapons in Jabal Saraj district.

Afghan National Security Forces reportedly killed 14 and arrested 15 elements of the Islamic Emirate of Afghanistan, as well as destroyed a vehicle and a hiding place in Deh Yak district, according to the Afghan Ministry of Defense.