Hello and welcome to the 586th installment of the SWD.

Improvised explosive device killed three civilians on a road near the village of Barad in Afrin region.

Left over Islamic State’s improvised explosive device killed one and wounded one civilian at a farm near the village of Al-Humr in eastern Al-Hasakah.

Hayat Tahrir al-Sham attacked a checkpoint of Al-Jabhat al-Wataniya lil-Tahrir’s (National Liberation Front) Suqour al-Sham north of the village of Jarjanaz, after a dispute between the two escalated. According to the reports, two civilians were killed and six wounded in clashes between the two sides.

1- Al-Bagouz axis: violent engagements broke out between our fighters and terrorists in the evening. The terrorists used all kinds of heavy weapons, trying to break the front lines of our fighters. They set fire to the tires to prevent the detection of their movements and positions by coalition Air Force. Several positions of them, killing one of them a number of terrorists, while destroyed some command and guidance centers as well.

The terrorists tried to attack four car bombs with our fighter points, but our fighters managed to kill one driver. His body was taken into the hands of our fighters and the car was taken. The other three vehicles were targeted by our fighters with heavy propelled grenades and heavy weapons, our fighters also seized weapons and communications equipment

The coalition artillery targeted four terrorist sites, which resulted in the destruction and the killing of a number of their elements, we were unable to know their numbers.

Our fighters were able to advance on the front, despite the presence of mines planted by the organization in the area.

On the other side of this axis, the terrorists attempted a counter-attack against our forces, targeting a bulldozer of our troops that was damaged, but the attack was attacked and several were killed. Our fighters seized a number of weapons and military equipment.

After our forces tightened control over half of the town of Sousse, they continue to advance in their neighborhoods to liberate the entire town from the terrorists.

Our fighters also launched an attack on terrorist positions from three sub-axes. They advanced 1 km on the first axis and were able to install 14 new points, while the International Alliance aircraft bombed several sites for terrorists, but the damage was not known.

The terrorists tried to take the initiative in launching a counter-attack. They fired a rocket-propelled grenade into a building that our fighters had liberated. The building was destroyed and some of our fighters were injured. They were taken to the field hospitals.

As they advanced in the second axis distance of / 2 / km and were able to install / 19 / new points and the seizure of a car carrying a gun Dushka caliber / 12.5 / mm and killed a number of terrorists, after violent clashes.

As they advanced in the third axis distance of 3.5.5 km and were able to install (6) new points, following clashes and battles with the terrorist organization.

In the evening, our fighters advanced a distance of 1 km and set 17 new positions after clashes with terrorists who resorted to indiscriminate shelling with mortars and heavy artillery.

Sporadic clashes continued until the liberation.

For the second day in a row, the town of Sousse witnessed the heaviest clashes between our fighters and a terrorist who called after our troops stormed the town since yesterday.

Continuing clashes have caused great losses among the terrorists amid significant progress of our forces, where the village of Hawi al-Sousse was liberated adjacent to the town, and our forces took control of most of the town’s neighborhoods, while liberation was a matter of time.

2- Hajin axis: engagements broke out between our fighters and terrorists “dodging” in this axis, while the terrorists resorted to the bombardment of long, using heavy weapons and mortars and the buses, but did not result in any damage to the ranks of our fighters, and our forces responded to them through the bombing center, after To locate their launch sites and to monitor their movements, but the losses suffered by the terrorist organization were not known.

This axis is currently witnessing mutual bombardment of mortars from time to time.

3-The final outcome of the engagements:

– Number of strikes by coalition: 10 strikes. 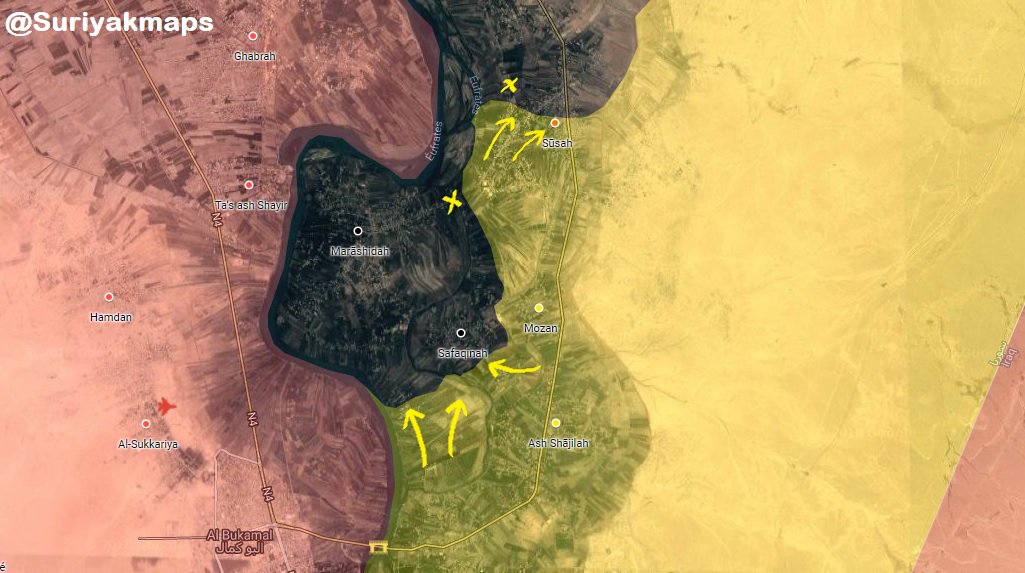 Syrian Arab Army arrested a former commander of the Free Syrian Army’s Al-Wiyat Mujahidi Hawran, Omar Nahar al-Wadi in the city of Inkhil. Al-Wadi was arrested due to several pending criminal cases against him.

Islamic Emirate of Afghanistan’s (Taliban) improvised explosive device killed one and wounded one element of the Afghan National Army in Yaka Pesta area of Qaysar district.

Afghan National Security Forces killed eight and wounded three elements of the Islamic Emirate of Afghanistan, as well as destroyed three hideouts in the province.