Hello and welcome to the 542nd installment of the SWD.

Within the scope of the second phase of the Resistance of the Age in occupied Afrin, our forces continue their operations against the Turkish invasion army and its jihadist mercenary allies. Between 7thand 8thof September, our forces carried out two distinct operations in Afrin’s Rajo and Shera districts.

On September 7th, one of our units set up an ambush on the road leading to Afrin’s Shera district, targeting one of the mercenaries of the Hamza Division named Abdulrahman al-Zaher and originally from Azaz. As a result, the mercenary was killed.

On September 8th, our unit set up an ambush in Afrin’s Rajo district, this time targeting a member of the Ahrar al-Sharqiya mercenary fraction. The terrorist has been killed in the operation.

Syrian Arab Air Force targeted Abdin and Al-Habit villages in southern Idlib. According to the Syrian Civil Defense (The White Helmets), two civilians were killed and six wounded by the targeting. 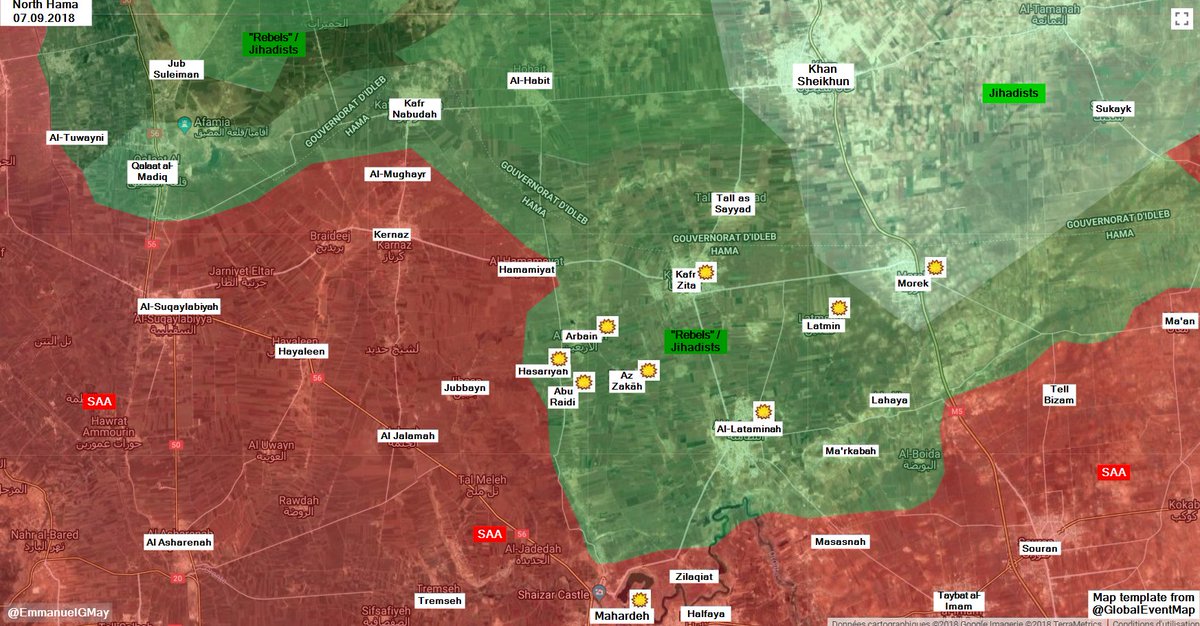 Army units continued to advance in the depth of the rocky cliffs in the area of al-Safa hills in Sweida eastern Badyia (desert) after violent clashes with Daesh (ISIS) terrorists.

SANA reporter in Sweida said that army units, in cooperation with the supporting forces, advanced over an area of 1 km in the area of al-Safa hills, establishing control over strategic areas and many caves used by Daesh terrorists as fortified positions.

The reporter added that the new advancement came after violent clashes between army units backed by the supporting forces and terrorists, as scores of terrorists were killed and others were injured while the remnants fled away.

The reporter indicated that the army air force and artillery conducted precision bombardments against positions, dens and fortifications of Daesh terrorists in the depth of the rocky cliffs, inflicting heavy losses upon them amid a state of collapse among their ranks after destroying their defense lines and depriving them of their water resources.

Suicide attack targeted the 4th Police District of Kabul city, as supporters of Ahmad Shah Massoud were gathering in the district. Afghan Ministry of Public Health stated that at least seven people were killed and 25 wounded in the incident.

Afghan National Security Forces killed three and wounded five elements of the Islamic Emirate of Afghanistan, as well as destroyed a vehicle in Shib Koh district.

Two elements of the Afghan Local Police defected to the Islamic Emirate of Afghanistan in Mizan district.

Afghan National Security Forces killed 26 and wounded three elements of the Islamic Emirate of Afghanistan in Nawa-I-Barakzayi, Sangin, and Nad Ali districts, according to the Afghan Ministry of Defense.

Two elements of the Afghan National Army surrendered to the Islamic Emirate of Afghanistan in Torkas area of Maruf district.