Hello and welcome to the 329th installment of the SWD.

Syrian Democratic Forces’ YPG reportedly recaptured Haj Bilal village in Shaykh al-Hadid subdistrict, and Al-Amoud (Dikmah Tash) village and Jabal Serghaya in Sharran subdistrict of Afrin from the Turkey-backed Free Syrian Army. However, the aforementioned localities should be treated as disputed for now, as there is lack of evidence that suggests YPG‘s control over the localities.

General Staff of the Republic of Turkey announced death of a Turkish Armed Forces’ element and injury of additional five, due to yesterday’s Hezbollah and IRGC’s shelling of Al-Eis in the southern Aleppo.

Russian Air Force conducted air raids over Termala, Kafr Nabl (Kafranbel), Al-Ghadfa, and Afs in Idlib governorate. According to the reports, four civilians were killed and five wounded by the shelling of Termala. Syrian Civil Defense (The White Helmets) stated that one of its elements was killed and another wounded by the air raids over Al-Ghadfa.

Syrian Democratic Forces’ YPG shelled Atmah refugee camp from its positions in Afrin region. According to the Syrian Civil Defense, three civilians were killed and 14 wounded by the shelling.

Rebel operations room Dahar al-Ghaza, backed by Hayat Tahrir al-Sham reportedly took control of Tell Kalbah, Dhahabiyah, Tawil al-Halib, air defense battalion (abandoned battalion), and Tellat al-Bindira from the Syrian Arab Army in the eastern Idlib. If the reports about the capture of the aforementioned localities are true, it would mean that Tell al-Sultan and Al-Mushayrifah are also under the control of the rebels.

Hayat Tahrir al-Sham released the general commander of the dissolved Free Syrian Army’s Harakat Hazzm (Hazzm Movement), Ahmad al-Khouli (Abu Abdullah) after three years of imprisonment. Al-Khouli was imprisoned in Al-Aqab prison for three years, before being transferred to Idlib Central Prison three months ago. Hayat Tahrir al-Sham (Jabhat al-Nusra then) arrested Al-Khouli for the murder of the judge Sheikh Yaqoub al-Omar and his role in Harakat Hazzm, as a leader of foreign relations, which resulted in the United States sending TOW missiles to the group. Al-Khouli was released since Harakat Hazzm is dissolved and there is insufficient evidence against him in the murder of Al-Omar. 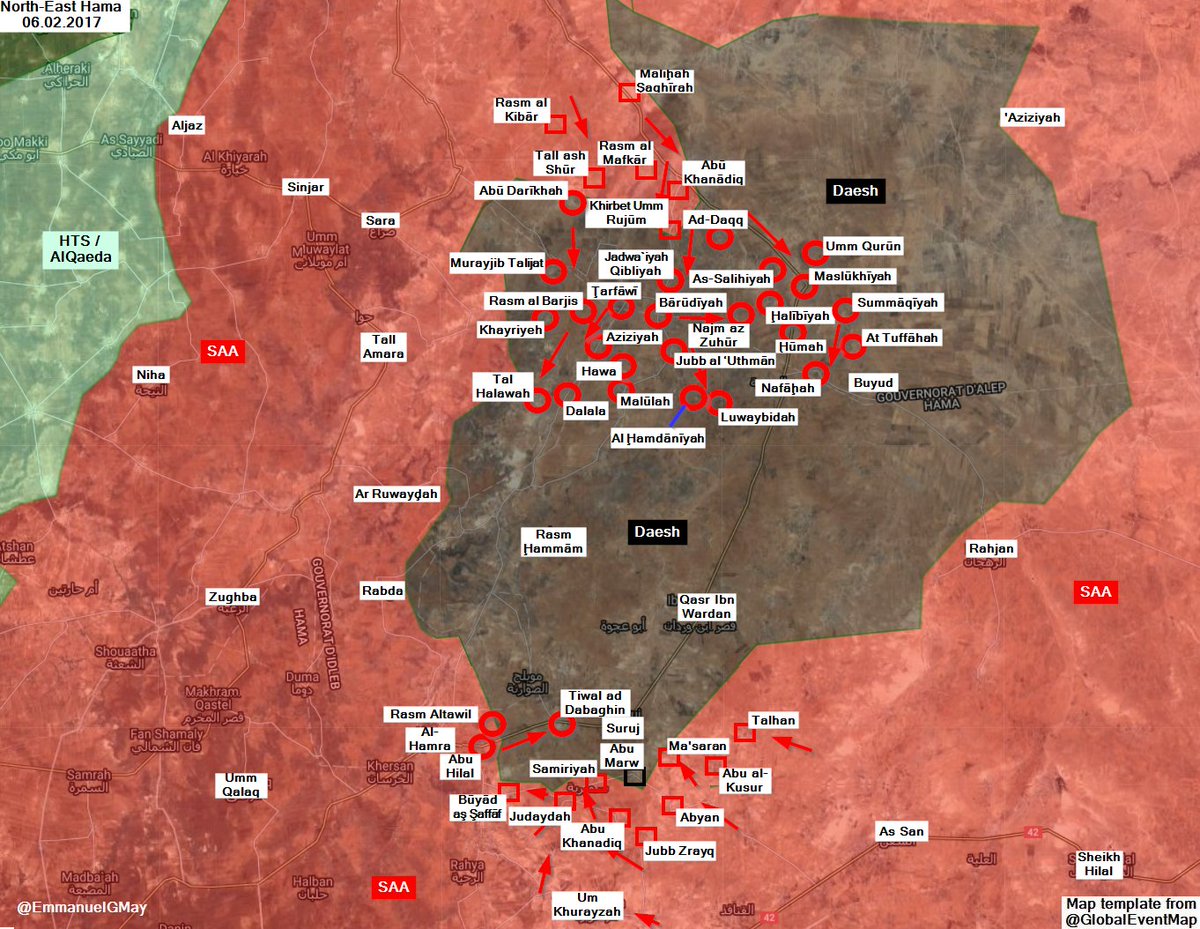 Rebel forces in the East Ghouta shelled Jaramana, Harasta, and Al-Mezzeh, Al-Abbasiyin, Bab Touma, and Rukn al-Deen districts of Damascus city. According to the Syrian Arab News Agency, three civilians were killed and eight wounded by the shelling of Bab Touma, while two civilians were killed and five wounded by the shelling of Al-Homsi neighborhood of Jaramana.

Rebel factions operating in Daraa governorate, backed by Israeli Defense Forces stopped Al-Fatihin (Conquerors) battle against the Islamic State-affiliated Jaysh Khalid ibn al-Walid, aimed at completely eliminating the group from Daraa governorate. The battle started on the 1st of February and was allegedly stopped by Israel. Reports suggest that the battle might not be started again. Rebel factions withdrew heavy weapons and vehicles from the front line two days ago and returned to their headquarters.

Afghan National Security Forces killed one and wounded two elements of the Islamic Emirate of Afghanistan in Maruf district.