Hello and welcome to the 240th installment of the SWD.

Syrian Arab Army backed by allies captured Al-Rashadiyah and Rujm al-Aswan from the rebels, south of Khanaser. However, several sources indicate that both localities were shortly recaptured by the rebels. Additionally, rebels reportedly seized a technical mounted with a ZU-23-2.

Ahrar al-Sham released a statement calling for a ceasefire between Hayat Tahrir al-Sham and Harakat Nour al-Deen al-Zenki, asking the former to stop the attacks and reach a reconciliation with the latter through the Sharia court. Ahrar al-Sham listed four “points” of the initiative to reconcile the two sides. First point asks for the cessation of attacks against HNDZ and release of all detainees on both sides from the beginning of the conflict. Three other points are the formation of a supreme court, restoration of rights to all parties, and restoration of pre-fighting conditions.

Ahrar al-Sham raised and then took down the Free Syrian Army’s flag in Binnish due to a dispute with Hayat Tahrir al-Sham. Ahrar al-Sham’s director of services, known as Abu Zahra stated that they agreed with the president and deputy of the local council to raise the flag in the locality. The flag was taken down only after an hour of being raised, after the elements of Hayat Tahrir al-Sham, including the civil official “Abu Fadel” objected. According to Abu Fadel, Ahrar al-Sham raised the flag without the agreement with the local council, which requested the act of raising the flag be postponed for a few days.

Syrian Democratic Forces reportedly entered Al-Busayra and are clashing with the Islamic State in the town, after sieging the locality a few days ago.

Syrian Ministry of Defense and the General Command of the Army and Armed Forces officially announced Al-Bukamal (Albu Kamal) as captured from the Islamic State. Unconfirmed reports suggest that the Syrian Arab Army freed dozens of abducted Yazidi civilians after capturing Al-Bukamal.

Islamic State launched several anti-tank guided missiles against the Syrian Arab Army near the border between Syria and Iraq. According to Amaq, a BMP, two vehicles, and an ammunition truck were destroyed. East of Al-Bukamal, at the outskirts of Al-Hari village, IS’ suicide attack reportedly targeted SAA‘s gathering. 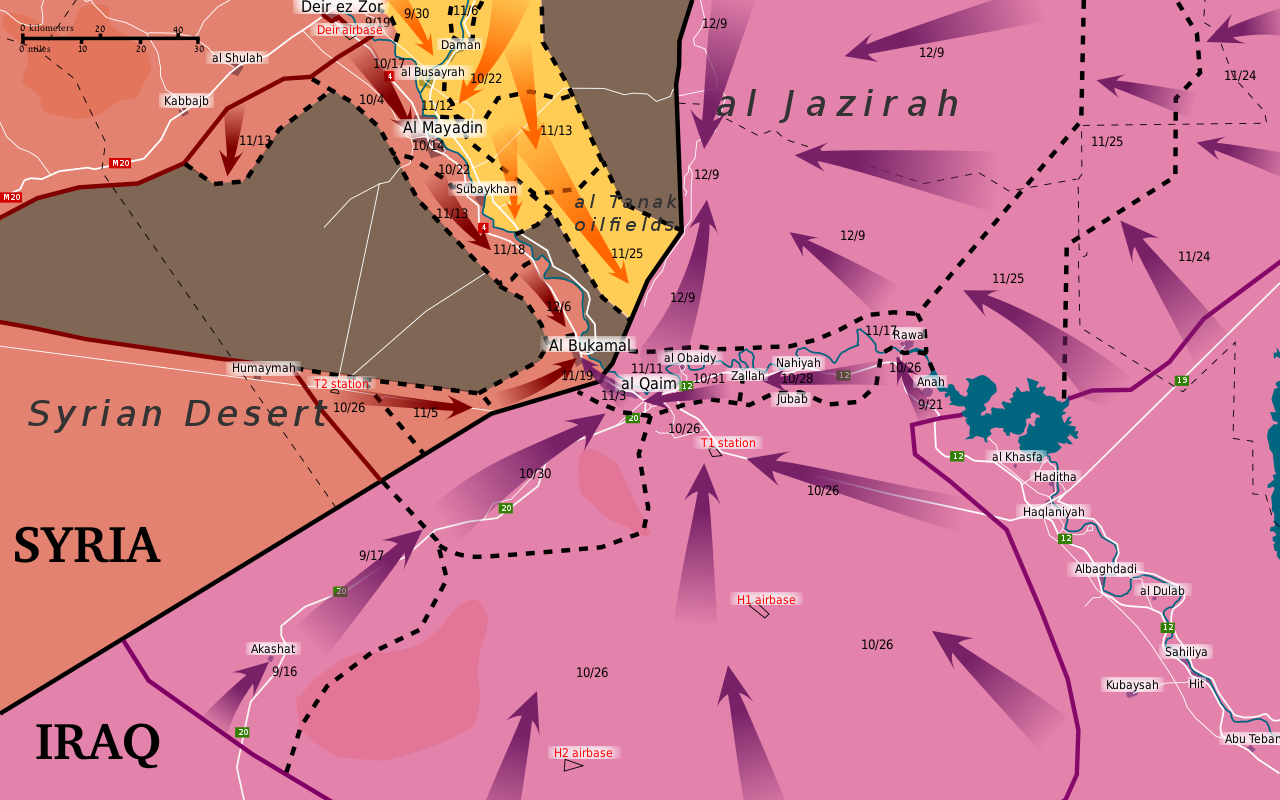 Local council elections were held on Tuesday in Al-Abbadeh, under the supervision of the Rural Damascus Governorate Council’s “Electoral Commission”. Mahmoud Mohammed Qalaa was elected as the president of Al-Abbadeh’s local council, and Rashid Ahmed Zaidalani as his deputy. Furthermore, three new members of the council were elected; Abdel Ghafour Ahmed al-Hajjah, Mahmoud Farid Mohsen, and Bashir Sami Barakat.

Directorate of Health in Damascus reported death of three and injury of 41 civilians in East Ghouta due to yesterday’s shelling and air raids by the Syrian Arab Army and Syrian Arab Air Force, respectively.

People of Kafr Shams elected 15 members of the new local council, including the president and deputy of the body. Elections were held transparently without any incidents. Thabet al-Bashir was elected as the president of the council, and Khalid Kanan as his deputy. According to Al-Bashir, the newly-elected council will meet next Saturday and present plans and projects to implement in the area.