Hello and welcome to the 134th installment of the SWD. 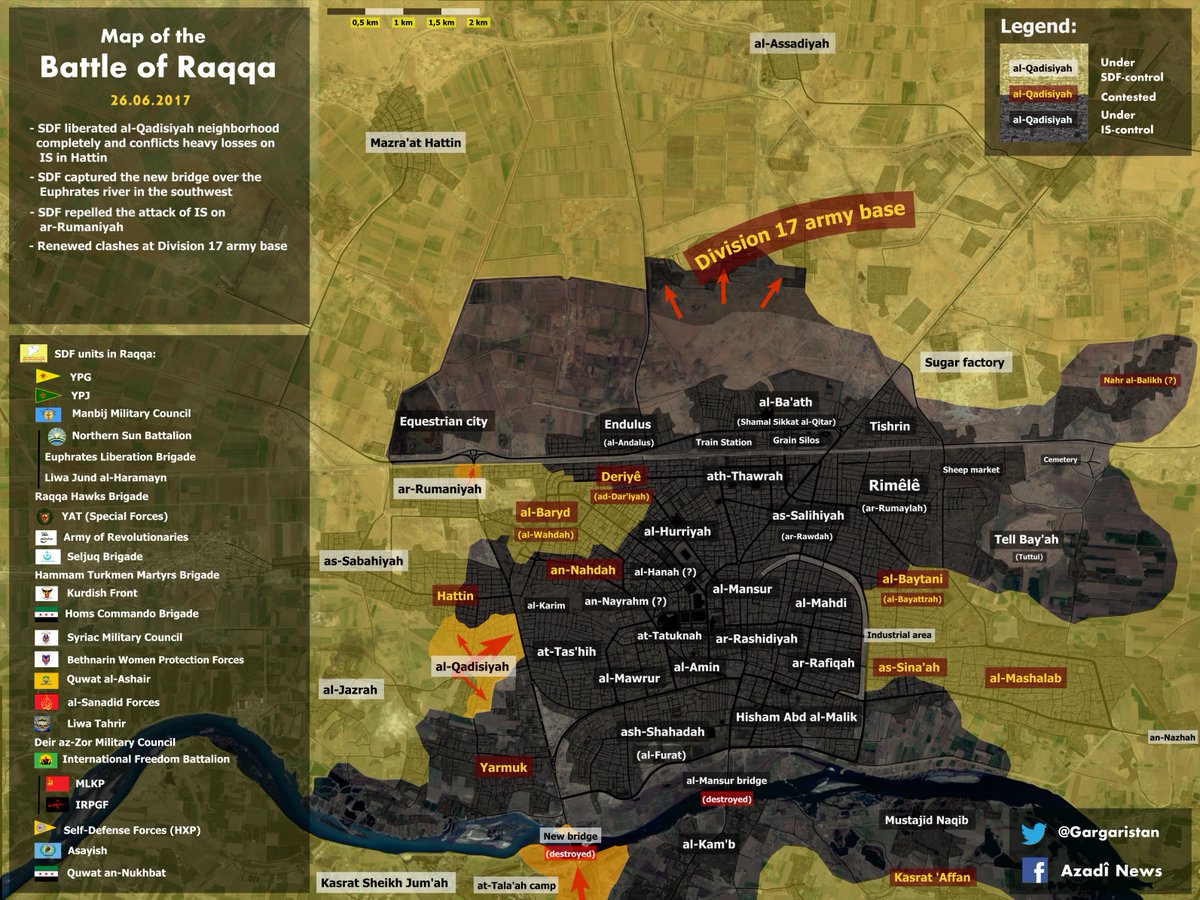 Turkish Gendarmerie wounded 12 people near Darkush as they’ve tried to illegally enter Turkey. The group of people trying to enter Turkey were reportedly displaced people from Deir al-Zour and Hama governorates. This isn’t the first time Turkish soldiers opened fire on people illegally trying to enter, on the 14th of June, seven people were killed. Turkey is enforcing its warning from 2016, when it announced that it will use force against those who disobey warnings and continue trying to illegally enter Turkey.

Amaq Agency released a statement saying that four SAA‘s soldiers were killed and seven injured in an Islamic State’s attack southeast of Palmyra.

Syrian Arab Army and Faylaq al-Rahman clashed on Ain Terma and Jobar fronts, the former allegedly made limited advances on Ain Terma front. However, these advances were denied by Faylaq al-Rahman’s statements, which state that rebels repelled SAA‘s attacks and damaged a tank and a ZSU-23-4 (Shilka) in the process. According to pro-government sources, SAA captured a junction and reached the outskirts of Al-Khair markets, southwest of Ain Terma.

Rebel “Daraa Martyrs Documentation Office” reported death of one Hayat Tahrir al-Sham’s fighter and one Free Syrian Army’s fighter due to clashes with SAA in and around Madinat al-Baath. Confirmed rebel death toll from the clashes in Madinat al-Baath is at least six fighters.

It appears that yesterday’s infiltration by IS in several districts of west Mosul was overhyped by Amaq, Iraqi forces easily overcame IS’ sleeper cells that caused havoc in Al-Tanak district.

Fursan al-Jubur (The Knights of Al-Jubur) aided by the locals killed an IS’ suicide bomber before he was able to detonate himself at the entrance to the Al-Houd Fawqani village, south of Mosul.

Iraqi security forces discovered a truck loaded with missiles and explosives in Al-Rusafa area, Baghdad. The vehicle was parked near an abandoned building which was raided, resulting in seizure of additional weapons and capture of a person stationed there.

The city of Al-Musayyib was targeted by an IS’ suicide bomber and a VBIED. Casualties from the suicide attack are practically none, because of an Iraqi police officer, Alaa Abdul al-Hussein Abbas, who “hugged” the bomber forcing him to detonate outside of a mosque. In the same area, Iraqi forces defused a VBIED. Amaq released a statement regarding today’s events in Al-Musayyib, according to it, two “martyrdom attacks” targeted two Iraqi Army’s checkpoints in Al-Musayyib area.

On the 25th of June 2017 CJTF-OIR has conducted 18 strikes in Syria. CJTF-OIR‘s main focus in Syria at the moment is Raqqa region where they did 12 strikes supporting SDF‘s operations against IS destroying seven fighting positions, four vehicles and a tunnel system.