Hello and welcome to the 114th installment of the SWD.

TFSA reportedly launched a raid at the entrance of SDF-held Tell Rifaat, east of Afrin, statement by one of the groups claims that seven SDF fighters were killed and their weapons seized. Pro-SDF sources released a footage showing one destroyed TFSA‘s armored vehicle during the failed attack on Tell Rifaat.

Syrian Democratic Forces officially announced the start of the last, 5th phase of “Wrath of Euphrates” operation which includes the capture of the city of Raqqa. SDF started strong and has already advanced east of the city’s outskirts towards the city by capturing Tawi, Maksayn, Nazhah, and Al-Mashalab district. 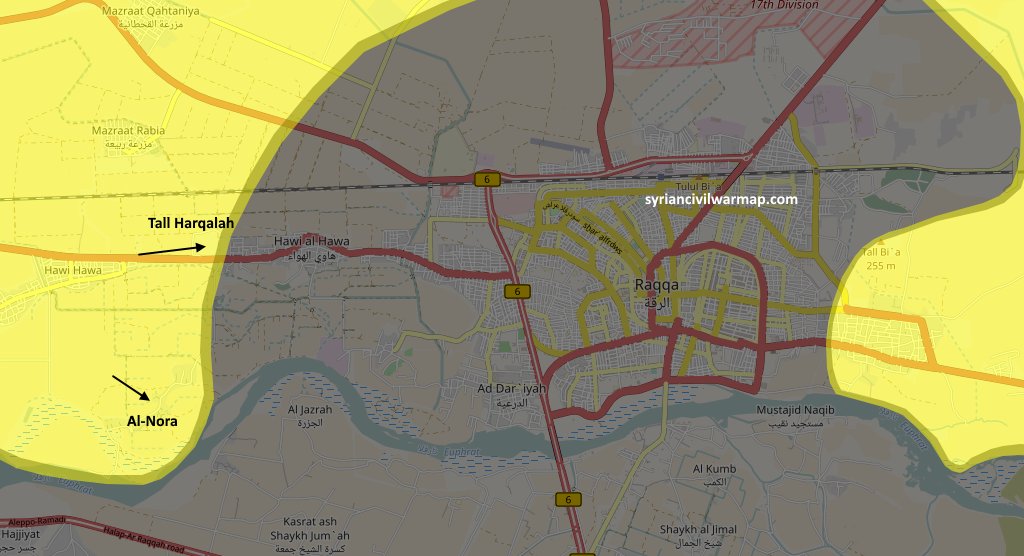 Free Syrian Army factions launched another attack against Syrian Arab Army and allies in Al-Zuluf area, east Al-Suwayda and along the Damascus-Iraqi border highway. Coincidentally, CJTF-OIR launched airstrikes or artillery strikes against SAA‘s units in the area, reason for the airstrikes provided by CJTF-OIR is a violation of de-confliction zone.

CJTF-OIR reportedly destroyed two artillery pieces, an anti-aircraft weapon, and damaged a tank, full CJTF-OIR‘s statement regarding the issue can be found here.

Syrian Arab Army and rebels continue to clash in Daraa, mostly in Al-Manashiyah and “Palestinian camp” districts of the city. Rebels’ operations room Al-Bunyan al-Marsous claimed death of another 15 SAA fighters, including four officers due to failed attacks against rebels.

Islamic State’s suicide bomber detonated himself in Hit (Heet), the bomber reportedly targeted civilians. According to the initial casualty numbers, 11 people were killed and four wounded.

On the 5th of June 2017 CJTF-OIR has conducted 35 strikes in Syria. CJTF-OIR‘s main focus in Syria at the moment is Tabqa-Raqqa-Deir al-Zour region where they did 33 strikes supporting SDF‘s operations against IS destroying five IS oil trucks, four fuel separator tanks, two IS well heads, an IS oil well, 19 boats, 12 fighting positions, eight vehicles, a house bomb, and a weapons storage facility; and suppressing an IS tactical unit.

Other area where two strikes occurred is Abu Kamal (Al-Bukamal) destroying four IS front-end loaders, four IS excavators, an IS crane and an IS well head. Full report on CJTF-OIR strikes conducted in both Syria & Iraq can be found here.