Hello and welcome to the 652nd installment of the SWD.

The command added that by highlighting the importance of concerting efforts of all the Syrian people in preserving the national sovereignty, it reiterates insistence on smashing terrorism and expelling the invaders and occupiers out of the Syrian soil, as the Syrian Arab Army is to guarantee safety of all the Syrian citizens and the others who are in that region.

Due to the invading Turkish state’s threats to invade northern Syria and displace its people similarly to al-Bab, Jarablus and Afrin, we as the People’s Protection Units, following the withdrawal of our forces from Manbij before, announce that our forces will be focusing on the fight against ISIS on all the fronts in the east of the Euphrates.

In conjunction with this, we invite the Syrian government forces which are obliged to protect the same country, nation and borders, to assert control over the areas our forces have withdrawn from, in particularly Manbij, and to protect these areas against a Turkish invasion. 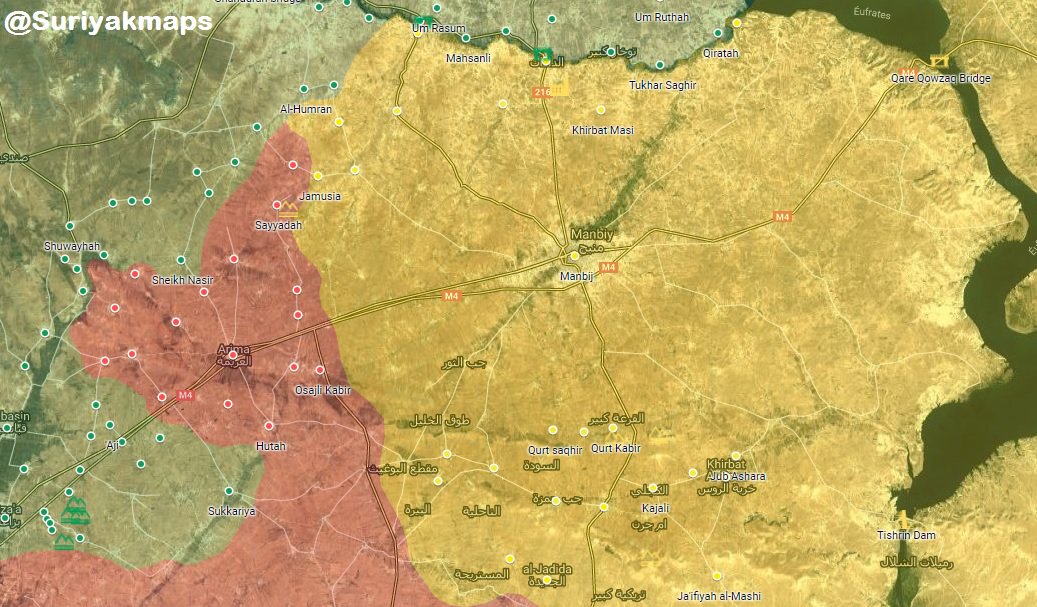 Syrian Arab Army arrested a former commander of the Free Syrian Army’s Jaysh al-Tawhid, Ayman Naji and his deputy Abu Dabah in the city of Al-Salamiyah in eastern Hama. Naji and Abu Dabah previously fought in the Northern Homs pocket and signed a reconciliation agreement with the Syrian government earlier this year. According to reports, the two individuals were arrested on alleged charges accusing them of commiting murder, theft, prostitution, looting, and drugs and weapons trafficking.

Syrian Democratic Forces made advances against the Islamic State in Al-Kishma, reportedly capturing Al-Qahadi, Al-Nafilah, and Abu Marih, as clashes between the two continue in the area.

Our fighters launched on Friday morning an attack on the sites and points of the terrorists in Hajin city and its surroundings, and that resulted in breaking out fierce clashes lasted for several hours in which a number of terrorists were killed and injured while the rest of them fled. Soon, our forces combed the area where the clashes took place as they found a quantity of ammunition and military equipment.

On the other side of this axis, our fighters achieved a noticeable advance after they were engaged into clashes with the terrorists and killed a number of them as the bodies of some of them were kept at the fighters’ hands so the terrorist organization resorted to bombarding our fighters’ points with mortars and cannons, but they did not cause any damage. During the progression, our fighters found a large quantity of weapons and ammunition.

On another front of this axis and in the evening hours, our fighters launched an attack on the terrorists’ sites and that resulted in killing a number of them. Our fighters progressed a distance of 1 km and installed other 14 points. The terrorist organization attempted to launch a counter-attack on our forces in the points they have lost, but our fighters repelled them. Moreover, dozens of terrorists were killed and others got wounded in the clashes.

Fierce clashes broke out in another side of this axis, in which a big number of terrorists were killed and wounded, and our fighters achieved an advance, managed to set up other 21 points and seized a number of weapons and an amount of ammunition. In the morning hours, the terrorists attempted to launch a counter-attack, while our fighters repelled them and inflicted them with vast damage in souls and equipment so the mercenaries were obliged to retreat.

In another front, our forces launched an attack on the sites and points of the terrorists so strong clashes erupted in which a number of terrorists were killed, our fighters progressed a space of 1 km and they set up 17 points. In addition, the military engineering teams of our forces began to dismantle the mines planted by the terrorist organization in the area amid intensive raids of the International Coalition’s warplanes on the points and sites of the terrorists.

In the morning hours, IS terrorists launched an attack on the points and sites of our forces, but our fighters repelled them and left killed and wounded in their ranks. During the attack, the terrorists used a drone, but it was downed.

In another side, our fighters launched an attack on the terrorists’ sites and set up a number of points.

Furthermore, the terrorist organization launched a vast attack with several cars using heavy weapons on our forces’ sites in another front of this axis so fierce clashes erupted in which a big number of terrorists were killed and wounded as the bodies of some of them were kept at our fighters’ hands, a number of their machineries were destroyed and they were inflicted vast losses in the souls and equipment. The International Coalition’s warplanes launched several aerial raids that resulted in destroying the terrorists’ sites and fortifications.

Furthermore, the intermittent clashes were still ongoing in most of the fronts of this axis till the moment of preparing this outcome, and a number of our fighters were wounded in those clashes and battles so they were taken to the hospitals to receive the medical treatment.

The outcome of the clashes:

The number of the terrorists’ killed: 71 terrorists.

The weapons and equipment seized by our fighters: 1 RBG weapon, 3 mortar cannon bases, a big number of mortar shells, a number of Kalashnikovs and a laptop.

The number of the International Coalition’s strikes: 104 aerial raids.

Improvised explosive device wounded three civilians near a hospital in the city of Al-Kashkia in eastern Deir al-Zour. 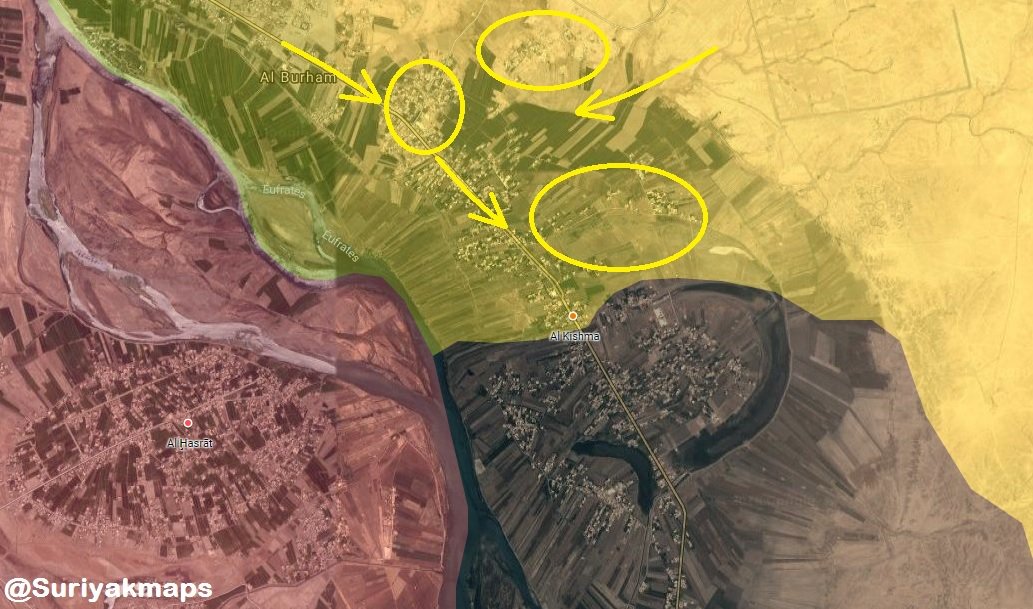 Afghan National Security Forces reportedly killed 25 and wounded 23 elements of the Islamic Emirate of Afghanistan (Taliban) in Khwaja Sahib Posh district, according to the Afghan Ministry of Defense.

Islamic Emirate of Afghanistan’s Al-Emarah News claimed that 31 elements of the Afghan National Security Forces defected to the group in Mardayan district.