Hello and welcome to the 635th installment of the SWD.

Within the scope of the second phase of the Resistance of the Age in occupied Afrin, our forces carried out two successful operations against the Turkish-backed terrorists of the Sultan Murad Division in Afrin’s Shera and Bilbile districts.Details of the operations are as follows:

1. On December 8th, one of our units carried out an operation in Afrin’s Shera district, targeting the military vehicle of the Sultan Murad Division commander named Abu al-Mot, who was in charge of the so-called Defense Committee. As a result, the terrorist commander was killed and another mercenary was wounded.

2. On December 9th, our forces carried out an operation against the military base of the Sultan Murad Division mercenary faction located in Qurne village of Afrin’s Bilbile district. As a result, one of the terrorists was killed and another two were wounded.

Unknown gunmen killed an element of the Turkey-backed Free Police on the road between Al-Rai and Al-Bab in northern Aleppo.

Improvised explosive device wounded a civilian in the village of Salim in northeastern Hama.

1- Al-Bagouz axis: on Tuesday morning, terrorists have launched an attack on the points of our forces in this axis, in which our fighters had liberated on Monday, the terrorists used all kinds of weapons, including mortars, but our fighters have repelled to them and killed and injured many of them in their ranks. The rest have fled.

While our forces advanced to the positions and fortifications of terrorists, killing a number of them, while our fighters were able to fix a number of points.

The terrorist organization tried to attack the points captured by our fighters and to initiate a counter-attack, but our forces confronted it

In the evening, our fighters launched an attack on the terrorist positions. There were strong clashes, in which a number of terrorists were killed, amid raids by the international alliance that targeted their vehicles. A number of terrorist elements were killed and their vehicles destroyed, and our fighters managed to achieve progress and stabilize 15 points.

Hajin axes: On Tuesday morning, terrorists launched a strong attack on the positions of our forces in this area, using all types of weapons, including heavy ones, and violent clashes broke out, but our fighters resisted the attack and managed to kill and injure dozens of terrorists, the military engineering units within our forces dismantled dozens of mines that the terrorist organization had planted in the area.

Several of our fighters were wounded and taken to field hospitals for treatment.

3 – The outcome of the final clashes:

– Number of strikes by the international alliance: 57 / strike. 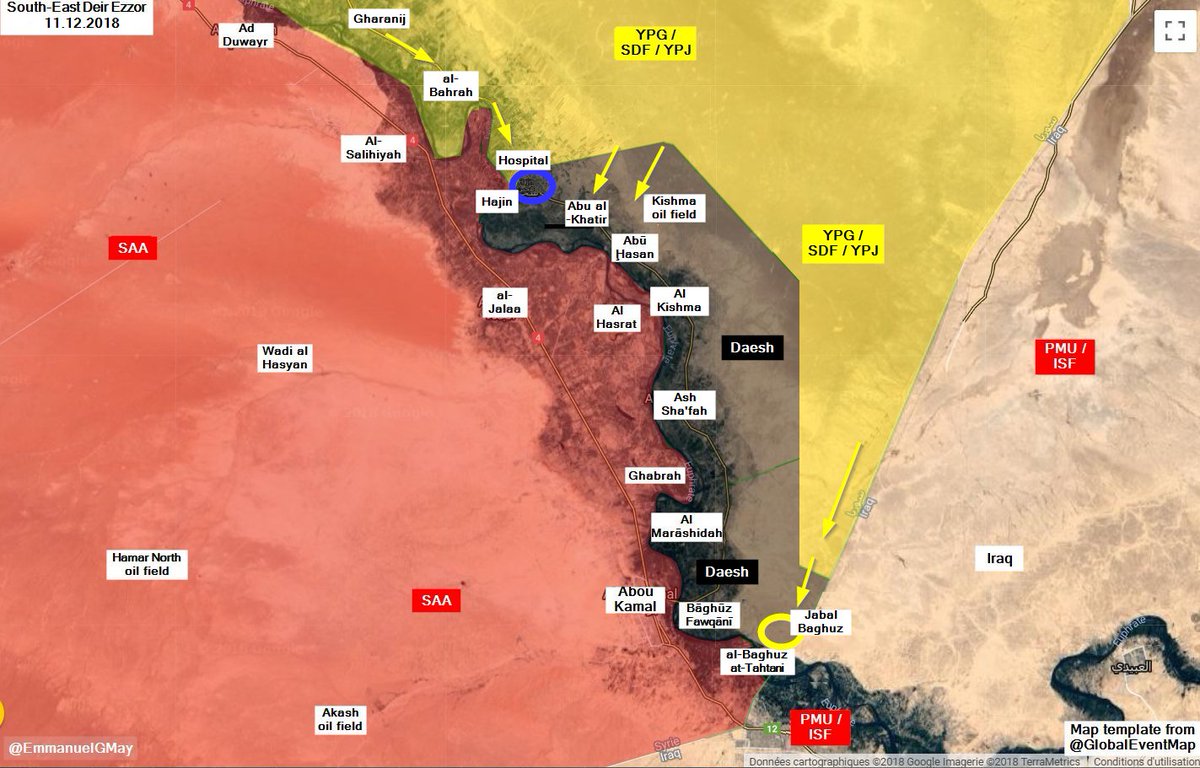 Unknown gunmen assassinated a Syrian Arab Army’s security officer, Mohammed Yusuf al-Hashish in the city of Muzayrib in southern Daraa. Al-Hasish was previously a commander of the Free Syrian Army’s Jaysh al-Thawra before reconciling and joining the ranks of the Syrian Arab Army in July of 2018.

Islamic Emirate of Afghanistan’s Al-Emarah News stated that the group conducted a vehicle-borne improvised explosive device attack against a joint Afghan National Security Forces and United States Army’s convoy in Paghman district. According to Al-Emarah, three vehicles were destroyed, as well as 23 military personnel killed and wounded in the attack.

Afghan National Security Forces wounded two elements of the Islamic Emirate of Afghanistan and destroyed a motorcycle in Sangin district.