Despite losing almost their territories in Syria, ISIS is still able to commit many attacks there. This also includes areas previously lost, such as Raqqa, their former major stronghold.

In November there have been 138 total ISIS releases from Syria (4.6 per day). 111 of those are both ISIS official statements, as well as those from Amaq News Agency. There also have been 13 Amaq Videos, 11 official photo releases and 3 videos from Wilayah al-Sham. This constitutes 38.34% of all ISIS media releases in November.

While Improvised Explosive Device (IED) attacks are a third of claimed worldwide ISIS activities, it is quite different in Syria. The so-called Islamic State does not use such attacks as much. There might be two reasons for this tactic. ISIS still holds some Syrian territory (although less than 1 percent of the country) and is still able to act as an army there. In other areas the sleeper cells might simply be too small and unable to build IED’s. This can also explain why ISIS in Syria has commited more assassinations (25) than IED attacks (19). The organization also claims Coalition airstrikes killing civilians (15).

ISIS offensive in Hajin pocket (22/11-24/11) frontlines can show two important things about this organization. First, ISIS took advantage of the weather (thick fog, which makes Coalition almost unable to use airstrikes) and overran Syrian Democratic Forces (SDF) positions near frontlines, killing and capturing dozens of SDF militants. Second, this success had a propaganda effect, as seen in number of releases during that period. For example, two Amaq videos in that period showed captured SDF fighters – their killed comrades were one of the subjects of ISIS photo reports. 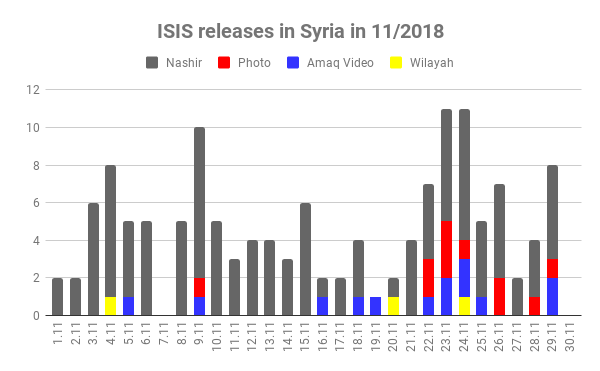 Looking at ISIS actions, we can divide its operations into a number of separate areas:

Because ISIS’ last stronghold is in Deir ez-Zor province, it is not surprising that the most of releases is from that area. 75 out of 111 Amaq/official statements, all photo releases and Amaq videos, as well as 2 out of 3 videos from Wilayah al-Sham were from Deir ez-Zor. Apart from Hajin pocket, ISIS is also active when it comes to its sleeper cells. Although SDF claims to capture them (for example, ISIS prominent leader), the sleeper cells still commit many attacks – assassinations, IED attacks and ambushes. ISIS has also reported attacks on Syrian Arab Army (SAA) on the other side of Euphrates, mostly in Albu Kamal area. Weapons used against SAA were mortar shells androckets (SPG-9). ISIS also claimed numerous sniper attacks.

As long as ISIS continues to hold any territory in Deir ez-Zor, it will continue to be the most reported province by the organization.

Despite SDF capturing Raqqa more than a year ago, ISIS is still active in the city. Of 15 reports from the entire province, 9 of them are just from the city formerly recognized as a former de facto capital of the self-proclaimed caliphate (for comparison, only one in second half of October). Two thirds of those incidents were assassinations. For example, ISIS claimed an assassination of Bashir Faisal al-Huwaidi on 2nd of November. On 4th, ISIS claimed a VBIED (Vehicle-Borne Improvised Explosive Device, also known simply an „car bomb”) near a hospital in Raqqa. While local official sources said a civilian was killed and several other people were wounded, in its statement ISIS reported killing and wounding about 50 SDF militants. Apart from Raqqa, ISIS has claimed attacks west (near Tabqa) and east of the city.

Before 17th of November, ISIS reported heavy clashes against SAA in area of Talul Safa. Due to fighting in a difficult area, ISIS militants were able to inflict heavy casualties. They claimed to destroy a Shilka with an Anti-tank Guided Missile (ATGM). SAA managed to capture the area on 17th of November with ISIS reportedly withdrawing into Syrian Desert. On 20th, ISIS released an official video from Talul Safa, called „Mountain Headers”.

ISIS is still active in Hasakah province, although is likely unable to commit any larger attacks. Its actions within the province show they are probably using a number of smaller cells rather than one bigger. The attacks were happening in various areas rather than concentrated on one area. Of seven reported claims, ISIS claimed four IED attacks and three assassinations, one of them in West Nashwa district in city of Hasakah.

The only area of ISIS attacks in Aleppo province in November was Manbij and its countryside. The so-called Islamic State has claimed three attacks there. Two of them were IED attacks targeting SDF commanders (one of those being also claimed by Harakat al-Qiyam). In third ISIS claimed killing of four SDF militants northwest of Manbij.

ISIS is far from being destroyed. Not only is it fiercely fighting in their last strongholds, but in the some of the areas it lost it managed to transform its actions into guerilla warfare. Although the sleeper cells are likely too small to conduct any large scale attack, they still can target and distract the security forces and terrorize local population. It may take years to totally eradicate the threat of ISIS in Syria and even after that, the organization calling itself “The Islamic State” may still not be fully defeated.