Hello and welcome to the 557th installment of the SWD.

Yekîneyên Parastina Gel’s (People’s Protection Units) Media Center claimed that two elements of the Turkey-backed Free Syrian Army were killed in two operations conducted by the group in Rajo and Jinderes subdistricts of Afrin. Full statement by the Media Center;

Within the scope of the second phase of the Resistance of the Age in occupied Afrin, our forces carried out two successful operations in Afrin’s Rajo and Jindirese districts, targeting the mercenary allies of the Turkish invasion army.

On September 23rd, our units ambushed the Ahrar al-Sharqiya mercenaries on road leading from the city of Afrin to Rajo district. As a result, one terrorist was killed and three others wounded.

On September 24th, our units carried out a sniper attack targeting a mercenary of the Sham Legion (Faylaq al-Sham) in the Jindirese area. As a result, the terrorist was killed. His name is Muhammad Ahmed al-Jassem, originally from Aleppo.

Improvised explosive device wounded an element of the Syrian Democratic Forces on the Aleppo – Raqqa road near the village of Al-Barouda, west of Raqqa city.

Hayat Tahrir al-Sham released the head of Morek’s local council and a member of the Hama governorate’s council, Ziad Nadaf, after he was arrested by the group for unknown reasons on 6th of September. However, reports surfaced suggesting that Nadaf was arrested because he refused to stop the work of Syrian Interim Government’s local council of Morek. Nadaf was reportedly forced to sign a pledge, which states that he will not carry out any political activity in the name of the Syrian Interim Government. Morek, which has two local councils, is expected to be led now by the Syrian Salvation Government’s local council.

– The engagements continued on this axis yesterday evening, and the terrorists tried to organize their ranks and carry out counter-attacks on the axes of the concentration of our forces.

Our forces confronted and retaliated in their wake. The field leadership confirmed the killing of 5 terrorists and the seizure of a number of individual machine guns.

This morning, our forces launched a combing campaign along Shijla village on the right, and clashed with terrorists in more than one point. Many points of concentration of terrorists were released and many of them were confirmed dead.

The aircraft participated effectively in the engagements yesterday and this day, where many of the fortifications were destroyed, and the artillery was also involved in targeting terrorist’s concentrations.

In this axis erupted the most violent engagements yesterday evening, and tried terrorists to launch a counter-attack to prevent the advance of our forces, our troops confronted them and suffered defeat and loss of life, we could not confirm the number.

– This morning, our forces continued to advance along the village of Al-Shijla on the left and carried out a combing operation at a distance of 1 km, where 10 points were liberated from terrorists, while the military engineering teams dealt with dozens of mines where they were dismantled.

Coalition aircraft actively participated in this axis, launching 5 raids targeting terrorist’s movements and destroying their headquarters, as well as an ammunition depot.

3–the outcome of engagements and battles on all axes:

Dead terrorists: 40 dead, added to the killing of others in various engagements did not confirm the number.

Dismantling and detonating dozens of mines

Destruction of a military headquarters, ammunition depot and military machinery. 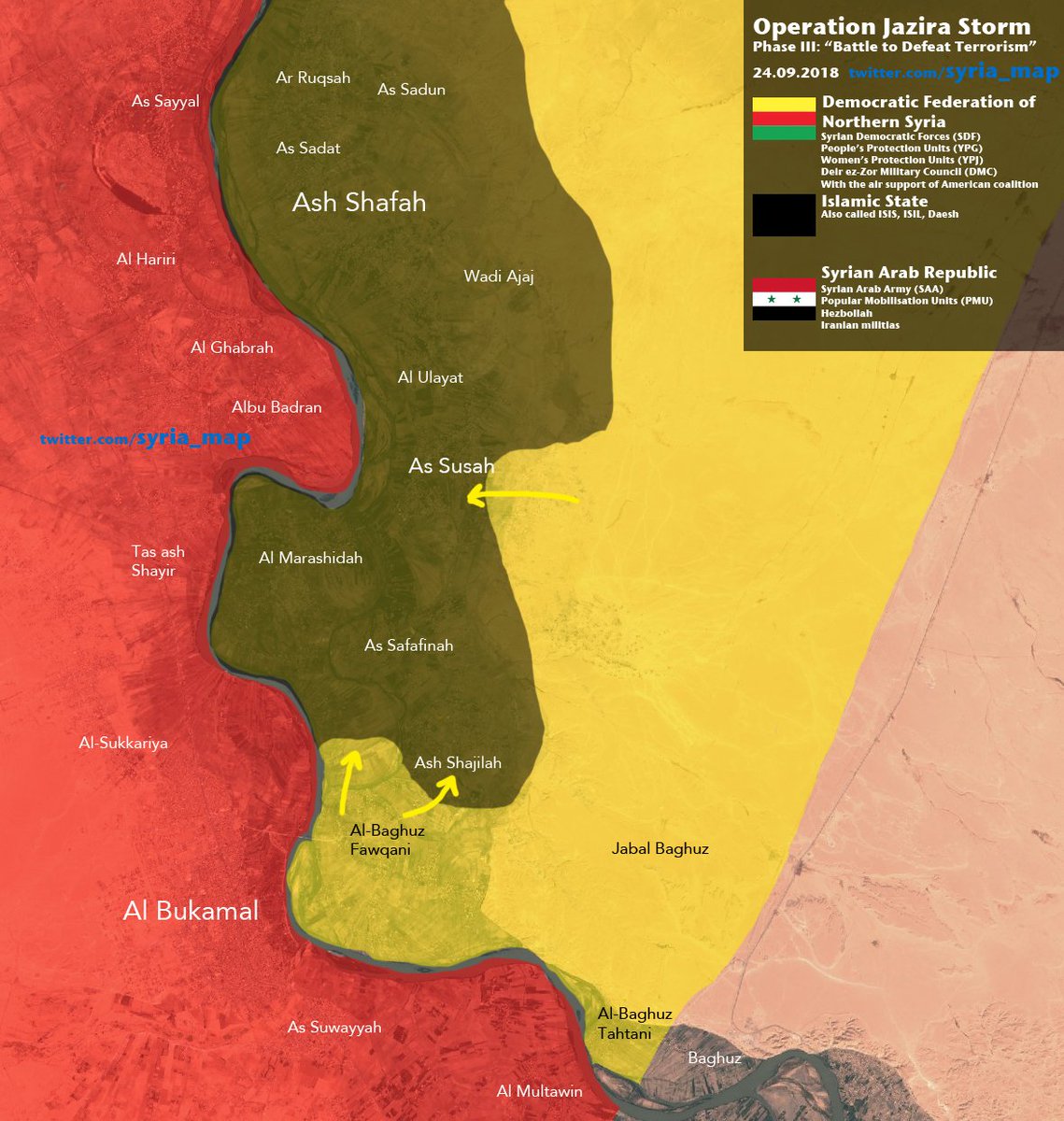 Units of Syrian Arab Army restored control over new areas in the rocky cliffs surrounding al-Safa hills, which is the last hotbed of Daesh (ISIS) in the depth of Sweida Badyia (desert).

SANA’s reporter in Sweida said that army units continued their military operation in the rocky cliffs area, regaining control over new areas after fierce clashes with Daesh terrorists and killing scores of them, including snipers.

As a result of this achievement, army units tightened grip on terrorists amid a state of collapse in their ranks due to army’s intensive strikes.

Islamic Emirate of Afghanistan (Taliban) ambushed and killed an element of the Afghan National Police in Almar district.

Afghan National Security Forces killed one and wounded two elements of the Islamic Emirate of Afghanistan, as well as destroyed a vehicle in Ghani Khel district.

Afghan National Security Forces reportedly killed 67, wounded 15, and arrested three elements of the Islamic Emirate of Afghanistan in Jaghatu district, according to the Afghan Ministry of Defense.

Two elements of the Afghan Local Police defected to the Islamic Emirate of Afghanistan in Chahar Sada district.

Afghan National Security Forces reportedly killed 30 elements of the Islamic Emirate of Afghanistan, including nine commanders, as well as wounded additional 11 elements and destroyed three vehicles and five motorcycles in Andar and Giro districts, according to the Afghan Ministry of Defense.

Afghan National Security Forces killed an element of the Islamic Emirate of Afghanistan in Marjah district.