Hello and welcome to the 556th installment of the SWD.

“We in the Wrath of Olive operation room have issued several statements in this regard. We have warned these traitors not to continue their work, and noted on more than once that our fighters are so careful that they can detect these games and hold the perpetrators accountable, but some of those mercenaries continued their attempts, they became a dirty tool in the hands of the occupation.

Among these traitors is Ahmad Zakaria al-Muhammad, who worked as a professional agent with the Turkish occupation in the area in collecting confidential information and the names of our civilians in Afrin in order to kidnap and commit crimes against them and carry out assassinations, in which he and a number of mercenaries caused many crimes against civilians.

Our fighters, who committed from the first moment to retaliate against the Turkish occupation and its tools, monitored the actions of the traitor Ahmad al-Muhammad and arrested him with the recognizable crime in al-Bab city. They took his confessions and killed him as a fair punishment for his dirty deeds on 16/09/2018.

We in the Wrath of Olive operation room renew our warning to the traitors and assure them that their attempts are open and will be held accountable sooner or later. We also confirmed that our operations will continue until the reconstitution of the civil courts in Afrin by their indigenous people and their self-administration after the expulsion of the Turkish occupation and its assistants, all the traitors we arrest will be arrested for their fair punishment.

Unknown gunmen threw grenades and opened fire on a checkpoint of Al-Jabhat al-Wataniya lil-Tahrir’s (National Liberation Front) Ahrar al-Sham in the village of Al-Habit. Two elements of Ahrar al-Sham were killed in the incident.

Unknown gunmen killed a commander of Hurras al-Deen near Kansafra in Jabal al-Zawiya area. The killed commander was reportedly known as “Al-Siyaf”.

Syrian Democratic Forces’ Media Center released a report regarding today’s encounters with the Islamic State in the governorate;

– Sporadic engagement yesterday evening occurred in this axis, with movements of terrorists and the use of medium weapons, while the coalition Air Force carried out an air strike targeting them.

– On a parallel axis, opposite Hajin city, our forces engage with terrorists, and none of them was confirmed killed or injured while fleeing, leaving behind a 12.5- machine gun with quantities of ammunition seized by our fighters.

– Morning hours of this day, our forces advanced in the vicinity of AL- Baguoz, established several defensive fortifications to protect the town, and engineering teams searched for mines, where 30 mines were dismantled.

– Our forces continued to comb the town and its surroundings, and took the result of the quantities of individual weapons machine and ammunition.

– At night our troops engage with terrorists face to face and made 1 km progress, liberating many of the points they were stationed in.

– Mines were a real challenge for our troops as terrorists laid mines in abundance, with engineering teams dealing with dozens of mines and dismantling them.

– In this axis, our forces targeted the movements of terrorists and confirmed the killing of three of them, and the coalition aircraft carried out four raids led to the destruction of terrorists tunnel, killing 8 of them

3-the outcome of engagement and battles on all axes:

– military vehicles were destroyed, one with a machine gun

– The dismantling of 34 landmines

Unknown gunmen killed two elements of the Syrian Democratic Forces near the village of Al-Shuhail in eastern Deir al-Zour. According to the reports, the gunmen belong to an Islamic State’s sleeper cell. 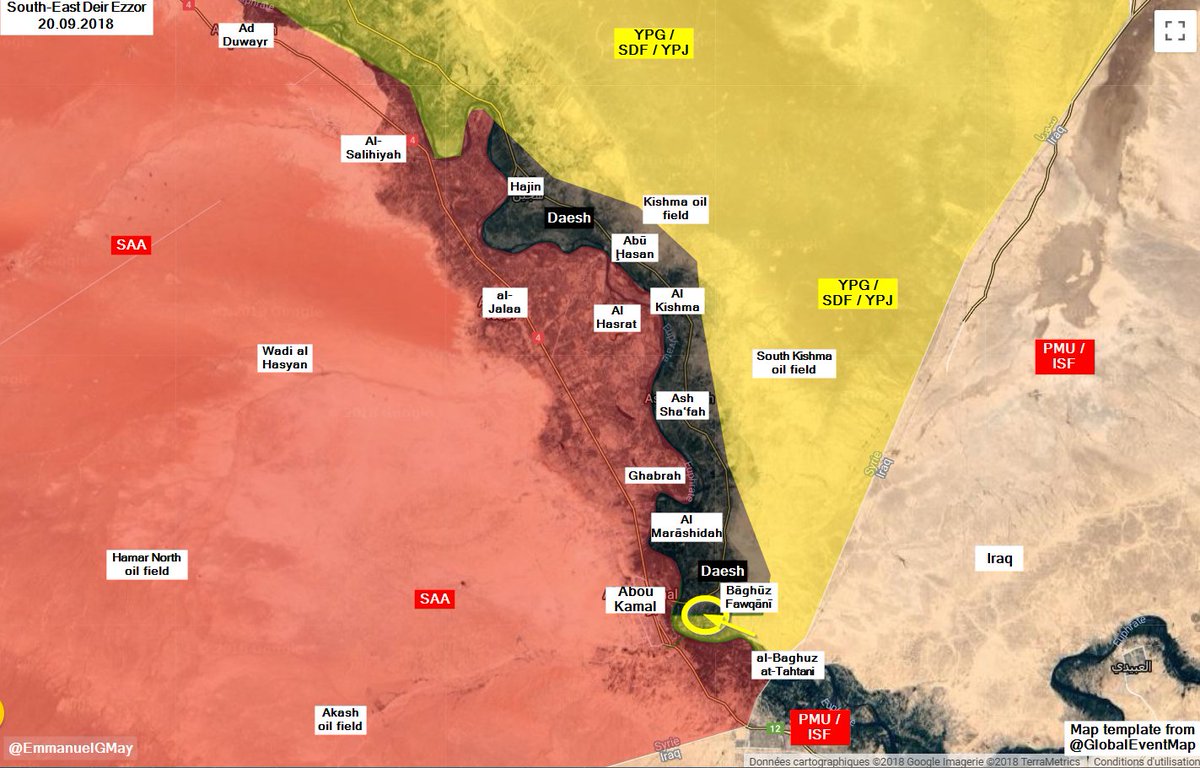 Islamic Emirate of Afghanistan ambushed and killed three elements of the Afghan National Army in Seydano area of Jerashk district.