Hello and welcome to the 554th installment of the SWD.

Within the scope of the second phase of the Resistance of the Age in occupied Afrin, our forces carried out two successful operations in Afrin’s Mabata, Sherawa and Rajo districts, targeting the Turkish invasion army and its mercenary allies.

On September 20th, our units ambushed a Turkish military vehicle on the road between the villages of Khalta and Gubele in Sherawa district. As a result of the action, two Turkish soldiers were killed.

On that same day, our fighters targeted a military vehicle of the Sultan Murad Division mercenary fraction on the road between Rajo and Mabata districts. As a result, three mercenaries were killed and three AK-47 weapons seized. The names of the killed mercenaries are as follows: Khaled al-Ragheb (originally from northern Hama), Ali al-Barhoum (Homs) and Kholouf al-Ghoutani (Damascus).

Improvised explosive device targeted a vehicle of Al-Jabhat al-Wataniya lil-Tahrir’s (National Liberation Front) Faylaq al-Sham in the city of Saraqib. The explosion killed a brigade commander in Faylaq al-Sham, Yusuf al-Houran. According to the reports, Al-Houran was a commander of Liwa al-Sadiq, which joined Faylaq al-Sham in May of 2017.

After the liberation process, SDF began to comb the areas close to their fixed positions. During the combing, the fighters found a 120mm mortar, which was mined and detonated by the fighters. As a result, terrorists fired several mortar shells at close proximity to our fighters. Our forces returned their positions with rockets.

There were intensive movements of Daesh terrorists in this area, after the liberation of the town by SDF. They bombed our fighters ‘points with mortars. After that 4 terrorists attempted to infiltrate our fighters’ points, but they resisted them, forcing the terrorists to retreat. While coalition aircraft raided their positions, killing the four terrorists.

Our forces continued to advance amid violent engagement with terrorists, supported by coalition aircraft, killing six terrorists in raids targeting their positions. In the course of their advance, our fighters found a weapon B. K. C / number / 1 / and weapons / B7 /, in addition to / 5 / of terrorist bodies.

2-Hajin axis: Our fighters in this axis provided a distance of / 2 / km, was combed the entire area they liberated and the trenching of tunnels and trenches, And the tunnels where the terrorists had been barricaded, and was installed / 15 points, in addition they took a Kalashnikov rifle. As our fighters advanced, a mine planted by the terrorists exploded, wounding five fighters and killing another fighter.

3- the outcome of engagement and battles on all axes:

-The number of terrorists killed: 10 / terrorists, in addition to 5 / other bodies that fell into the hands of our fighters.

– Number of martyrs: one martyr. 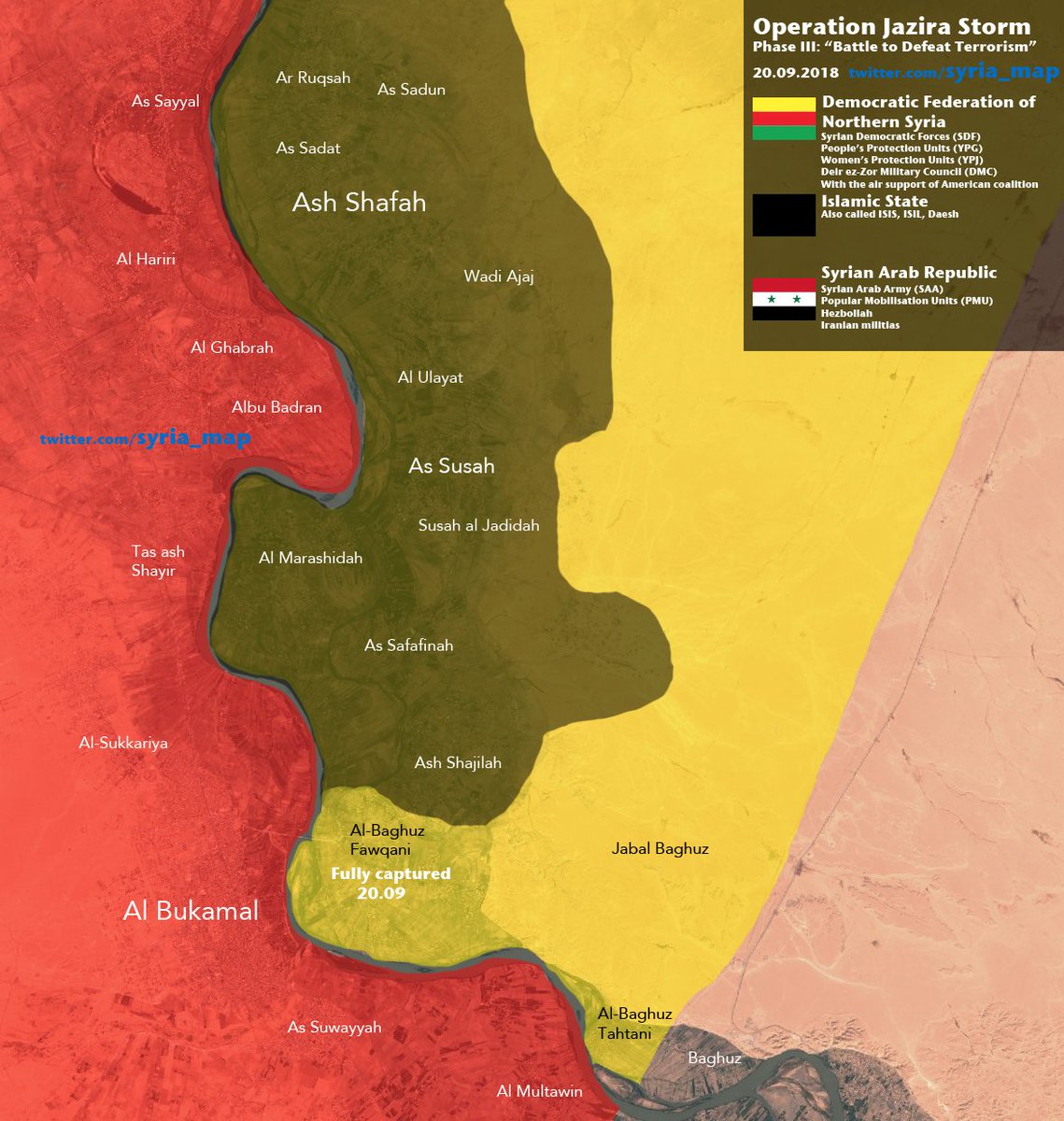 Islamic State’s weekly Al-Naba newsletter claimed that 500 elements of the Syrian Arab Army were killed and dozens wounded during clashes between the two in Al-Suwayda desert from 20th of July till 20th of September. Al-Naba also claimed that the Islamic State destroyed six tanks and 13 military vehicles, as well as repelled dozens of attacks in the same period.

Afghan National Security Forces reportedly killed 20 elements of the Islamic Emirate of Afghanistan and two elements of the Haqqani Network in Lazha Ahmadkhel and Ahmadabad districts.

Afghan National Security Forces killed three elements of the Islamic Emirate of Afghanistan, as well as destroyed a vehicle and several weapons depots and ammunition caches in Waghaz district.

Islamic Emirate of Afghanistan ambushed and killed an element of the Afghan National Army, seizing his motorcycle in Gunakhan area of Farah district.

Afghan National Security Forces reportedly killed 20 and wounded ten elements of the Islamic Emirate of Afghanistan in Arghandab district, according to the Afghan Ministry of Defense.

Afghan National Security Forces killed two and arrested two elements of the Islamic Emirate of Afghanistan, as well as destroyed a vehicle in Nad Ali district.

Afghan National Security Forces killed 21 and arrested 18 elements of the Islamic Emirate of Afghanistan, as well as destroyed a training center and several weapons depots and ammunition caches in Shah Wali Kot district.