Hello and welcome to the 552nd installment of the SWD.

Yekîneyên Parastina Gel’s (People’s Protection Units) Media Center stated that two elements of the Turkey-backed Free Syrian Army were killed in an operation conducted by the group in Sherawa subdistrict of Afrin. Full statement by the Media Center;

Within the scope of the second phase of the Resistance of the Age in occupied Afrin, our forces continue to carry out operations against the Turkish invasion army and its mercenary allies.

On September 18th, one of our units targeted a military point of the Ahrar al-Sharqiya mercenary fraction, located between the villages of Kafr Nabu and Berade of Afrin’s Sherawa district. Clashes at close range broke out between our unit and the mercenaries. As a result, two mercenaries were killed and three wounded.

Free Syrian Army’s Ahrar al-Sharqiya arrested an Islamic State’s cell near Shamarin camp, as the cell’s elements crossed Aoun al-Dadat checkpoint on their way towards Turkey. The cell consisted of five elements, including a commander.

Our forces continue their military operations on various fronts , making further progress, while Daesh is calling for a clear repression in his ranks .

The following are the results of battles and clashes during the last (24) hours:

1 – Hajin axis: Our forces clashed with elements of Daesh at night , following an attack by the latter on one of the points of our fighters, and resulted in the clashes killed 3 terrorists.

One of our fighters was injured in the clashes and was taken to the hospital. Two others were injured as a result of a mine explosion.

Our forces advanced 750 meters this morning and were able to install 6 new points. Our forces immediately began combing a number of houses, during which a mine exploded 3 of our fighters wounded.

2 – Al-Shadadi axis: Violent clashes broke out between our fighters and terrorists, which resulted in the capture of our fighters a quantity of military equipment. The International Alliance aircraft also carried out air strikes against a number of terrorist organization sites.

Our forces made progress at 6 pm on this axis, and strong clashes broke out between them and elements of the terrorist organization, in which 13 new points were installed and one terrorist was killed.

3 – Al-Kasra axis: Our forces combed the northeastern part of the village in full, during which sporadic clashes broke out between our fighters and members of the terrorist organization, and the explosion of a landmine 3 of our fighters resulted in injuries, in addition to our fighters were able to fix one point.

4 – Al-Bagouz: Violent clashes broke out between our forces and the terrorist organization this morning. The mercenaries tried to launch a counter-attack using two car bombs, but our fighters resisted the attack and destroyed the cars before they reached their target. The clashes continue until the moment of preparation.

5 – the outcome of clashes and battles on all axes:

– 25 terrorists were killed and one terrorist was injured

– Number of martyrs among our fighters: 5 martyrs. 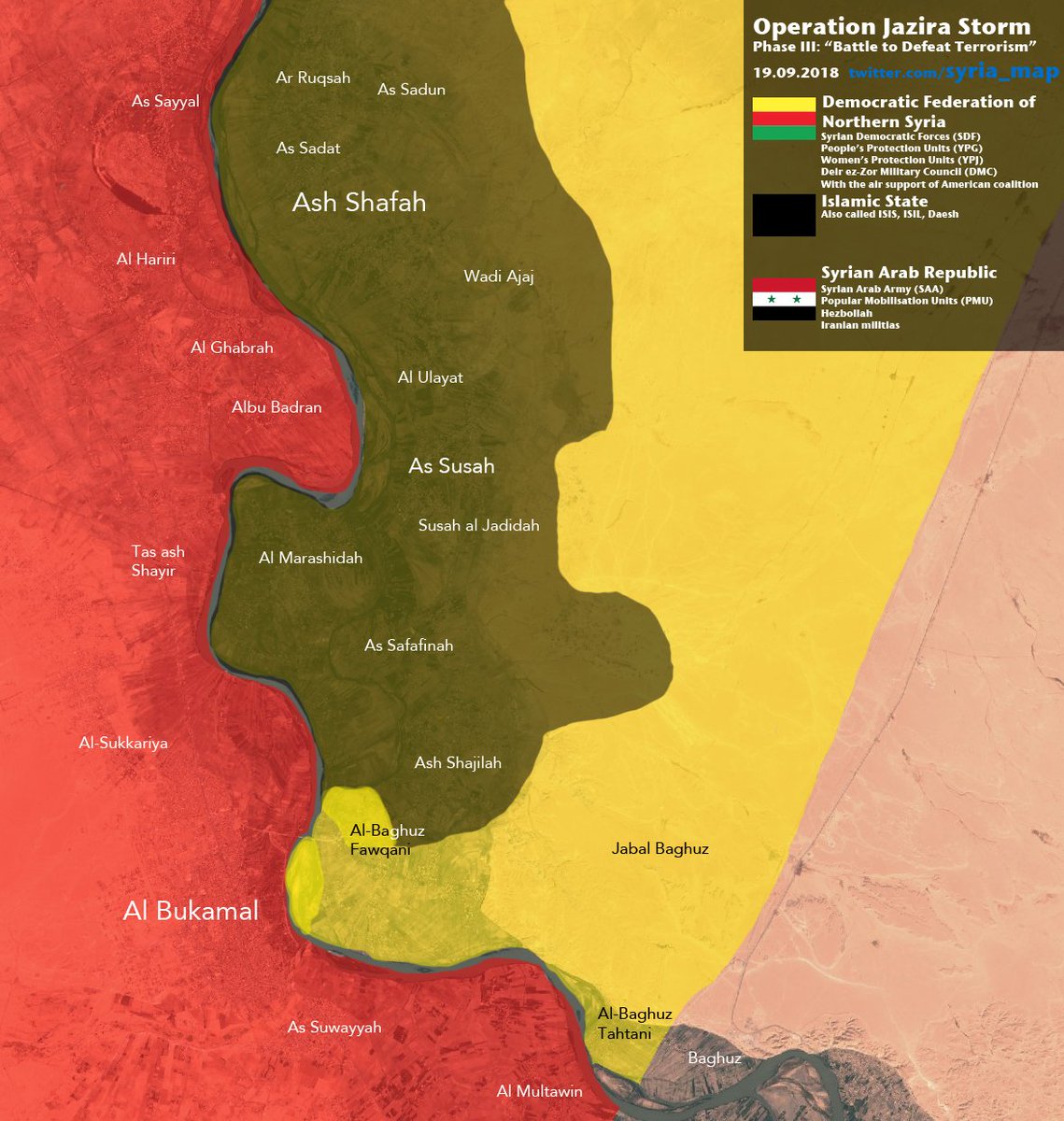