Hello and welcome to the 546th installment of the SWD.

Within the scope of the second phase of the Resistance of the Age in occupied Afrin, our forces carried out a series of successful simultaneous operations againstthe Turkish invasion army and its jihadist mercenary allies. The results of actions that have been carried out in Afrin’s Jinderes, Rajo, Mabata and Shera districts are as follows:

1. On September 12th, our units carried out an attack against the military point in the center of Jinderes where the mercenaries of the Turkish invasion army were stationed. As a result of clashes at close range, six mercenaries, including a Turkish soldier, were wounded.

2. At that same time, our units carried out a sabotage action in the village of Omera in Mabata district, targeting a military vehicle carrying a number of mercenaries. As a result, two mercenaries were killed and another one injured.

3. Our units carried out an action in the Berbene village of Rajo district, targeting a mercenary belonging to the Sham Legion (Faylaq al-Sham). As a result, the mercenary was killed and his AK-47 was seized.

4. On that same day, our units targeted a military vehicle carrying mercenaries of the Turkish invasion army in the Zeytuneke village of Shera district. The details concerning the results of this operation has not been clarified yet.

In recent times, our fighters have succeeded in directing specific strikes against the mercenaries of the Turkish occupation in all the occupied areas in Afrin, and those strikes take on Thursday another and more qualitative forms, especially those who committed violations against our people, and will be escalated more and more.

There is no doubt that the selection of the mercenaries involved in criminal acts is a necessary condition for our fighters’ operations. These mercenaries, regardless of their rank, are in the weapons’ range of our fighters, and they will pay the price sooner or later as those who have paid them.

Among the retaliatory operations of our fighters is the accounting and killing of the mercenary Amer al-Katea, a member of al-Shamia Front mercenaries on the road to Rajo district on 11/09/2018.

We are in Wrath of Olive operation room, renew our pledge to our people that our operations are continuing and will extend along the geography of the occupied areas in North Syria from Afrin to Idlib and Azaz and others.

Improvised explosive device killed one and wounded two elements of the Syrian Democratic Forces on Hazema road in northwestern Raqqa.

Improvised explosive device killed an element of Hayat Tahrir al-Sham in the city of Sarmin, north of Idlib.

Syrian Arab Army’s artillery shelling of northern Hama killed a prominent commander of the Free Syrian Army, Khaled al-Tinawi (Abu Omar al-Dimashqi). Al-Tinawi, who was born in Al-Shaghour neighborhood of Damascus, defected from the Syrian Arab Army in the early 2012. After fighting with Liwa al-Tawhid for six months in Aleppo, Al-Tinawi returned to the East Ghouta and joined Katibat al-Nabki of Liwa Tahrir al-Sham, which was under the command of Captain Firas Bitar. During the war, Al-Tinawi was wounded several times and in September of 2016 he was hospitalized for a year after being wounded on Jobar front. After he recovered, Al-Tinawi received an administration role in Faylaq al-Rahman, and later a role of an officer on Jobar front. Al-Tinawi was evacuated from the East Ghouta to Idlib along with other elements of Faylaq al-Rahman in late March of 2018.

Abu Amara Special Task Brigade stated that its improvised explosive device targeted a commander of the National Defense Forces near the village of Taldra, west of Al-Salamiyah. The commander was seriously wounded by the explosion.

1 -Al-Bagouz Fawqani: The terrorist organization launched a counter-attack and regained some of the points that our forces had liberated in the previous two days. Yesterday, our forces retaliated and achieved a one km advance and recovered the points that the terrorist organization had taken over. The liberation of nine mercenary positions was confirmed.

2-In this axis three mines were exploded one of the sweeping bulldozers of mines was damaged , as well as the second exploded causing a damage to a Hummer car, while the third mine exploded when a soldiers transportation vehicle passed over it , due to that Ten fighters of our forces were injured, some of them critical.

On this axis, a field command of our forces confirmed the killing of 23 mercenaries, one of them shoting by sniper near Baguoz, while 20 mercenaries were killed near Baguoz in the afternoon and two others were killed in the evening.

. 2-Also in an axis on the front of the Baguoz, the terrorists launched a counter-attack, regaining some of the points that our forces had already liberated, while our forces retaliated and made a one kilometer advance and liberated seven points. 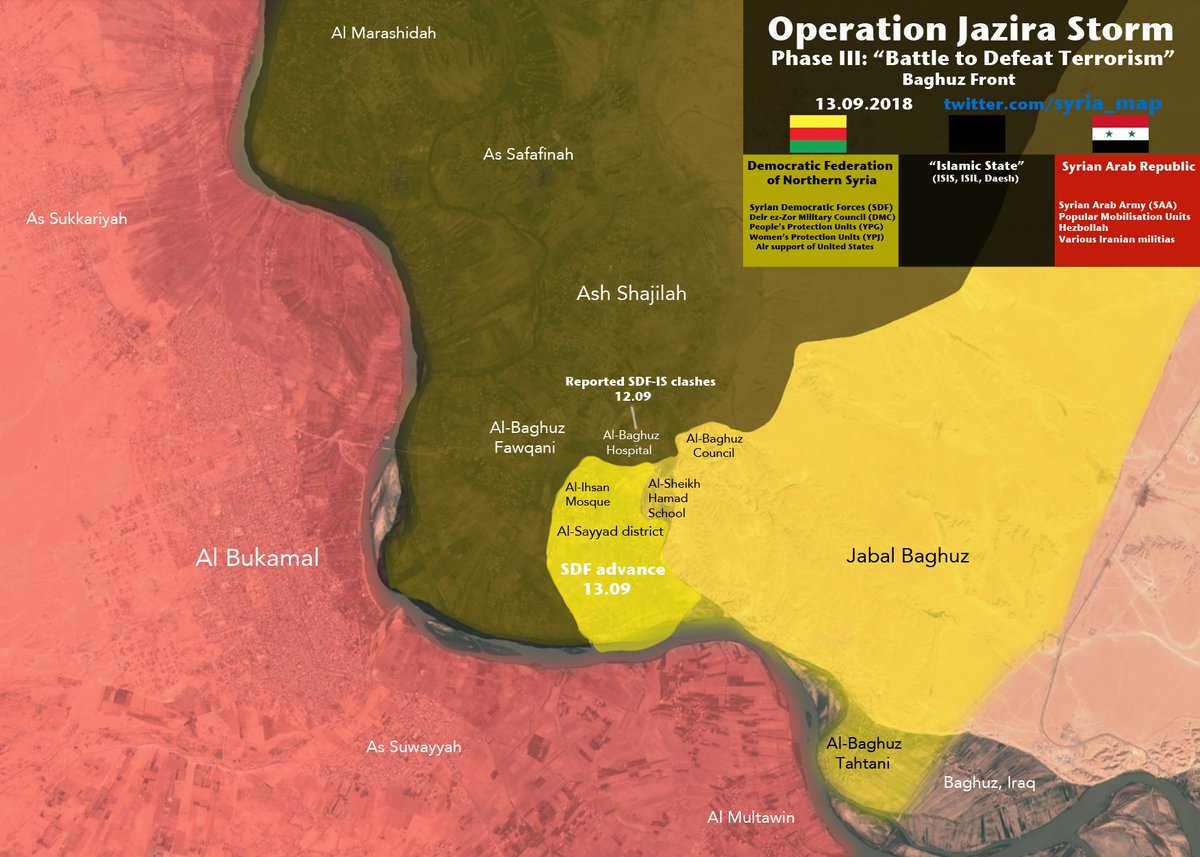 Afghan National Security Forces killed 12 and wounded two elements of the Islamic Emirate of Afghanistan, as well as destroyed a vehicle in Azra, Khoshi, and Pol-e Alam districts.

Islamic Emirate of Afghanistan’s Al-Emarah News claimed that 157 elements of the Afghan Local Police defected to the group in Obe district.

Afghan National Security Forces reportedly killed 19 and wounded ten elements of the Islamic Emirate of Afghanistan, as well as destroyed a vehicle, a motorcycle, and several weapons depots and ammunition caches in Ruj and Mohajer Abad areas of Farah district, according to the Afghan Ministry of Defense. Islamic Emirate of Afghanistan attacked an Afghan National Army’s post in Ruj area of Farah district, killing two soldiers.

Afghan National Security Forces killed 18 and wounded 11 elements of the Islamic Emirate of Afghanistan, as well as destroyed three vehicles in Maywand district.