Hello and welcome to the 533rd installment of the SWD.

Within the scope of the second phase of the Resistance of the Age in occupied Afrin, our forces continue their operations against Turkish invasion army and its jihadist mercenaries.

On August 29th, one of our units carried out an effective sabotage operation targeting a joint checkpoint set up by Turkish troops and Hamza Division terrorists in village of Barbana of Afrin’s Rajo district. As result of the detonation of explosive devices, the checkpoint was completely destroyed. The operation resulted in the death of 2 Turkish soldiers and 2 Hamza Division mercenaries, as well as wounding of 2 others.

Unknown gunmen killed an element of the Syrian Democratic Forces near the village of Al-Hasaywa in western Raqqa.

Al-Jabhat al-Wataniya lil-Tahrir (National Liberation Front) blew up two bridges in Al-Sharia and Beit al-Ras in Al-Ghab Plain region. Two civilians were wounded by the explosion of the bridges. The two bridges used to link areas under rebel control and areas under the control of the Syrian government. Local councils in Al-Ghab Plain condemned the act of blowing the two bridges. Al-Jabhat al-Wataniya lil-Tahrir also attempted to blow up Al-Hawiz bridge, however, the locals managed to stop the group from blowing it up. The two sides “agreed” that the bridge will be blown up if the Syrian Arab Army makes advances towards it.

Units of Syrian Arab Army carried out destroyed fortified points for Daesh (ISIS) terrorists in the area of Toloul al-Safa in Sweida Badyia (desert) and thwarted terrorists’ attempt to flee towards al-Tanf area on the outskirts of the Badyia nearby the Syrian-Iraqi border.

SANA’s reporter said that the army’s artillery targeted dens and sites for terrorist groups positioned in Toloul al-Safa area, killing and injuring scores of terrorists in addition to the destruction of their fortified points.

The reporter added that army enhanced its points on the northern and western parts of Toloul al-Safa area, tightening the noose on Daesh remnants.

Another army unit launched intensive strikes on movements of a terrorist group that was attempting to infiltrate towards the rocky cliffs to escape from the army’s grip.

The infiltration attempt was frustrated and a number of terrorists were killed or injured due to the strikes. 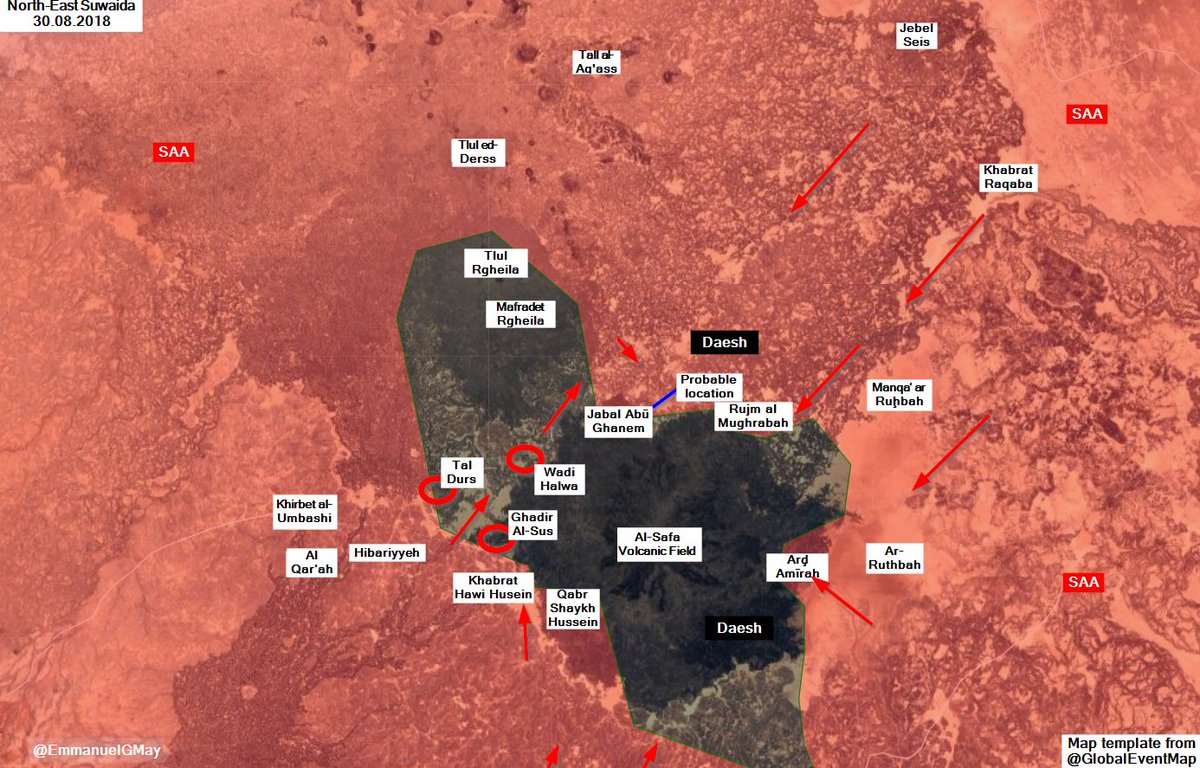 Islamic Emirate of Afghanistan (Taliban) overran two Afghan National Army’s posts in Koh Sayyad area of Shirin Tagab district. Two elements of the Afghan National Army were killed and three wounded, as well as an armored vehicle destroyed in the encounter. Islamic Emirate of Afghanistan seized a PK machine gun, two RPG launchers, an assault rifle, and a motorcycle from the posts.

Four elements of the Afghan Local Police defected to the Islamic Emirate of Afghanistan in Chahar Bolak district.

Islamic Emirate of Afghanistan’s Al-Emarah News stated that the group downed an Afghan Air Force’s helicopter in Barg-i Matal district. Five elements of the Afghan National Army were reportedly killed in the encounter.

Afghan National Security Forces killed five and arrested three elements of the Islamic Emirate of Afghanistan in the province.

Afghan National Army’s element surrendered to the Islamic Emirate of Afghanistan with his weapon in Khogyani district.

Residents of Pusht Rod area in Dawlat Yar district pledged their allegiance to the Islamic Emirate of Afghanistan. The aforementioned area consists of more than 300 families, under the leadership of commander Leal Bahadur Protan.

Afghan National Security Forces killed 24 and wounded 13 elements of the Islamic Emirate of Afghanistan, as well as destroyed six vehicles and motorcycles in Maywand district, according to the Afghan Ministry of Defense.