Hello and welcome to the 532nd installment of the SWD.

Throughout the night of 29 of August, within the scope of the second phase of the Resistance of the Age, our units carried out a series of successful military operations against the occupying Turkish army and its jihadist allies in Afrin. The objective of the actions was to avenge two of our comrades that had been martyred on August 9 in the village of Biye as a result of a plot staged by the enemy. The consequence of our operations conducted in the villages of Biye and Kefr Nebo of Afrin’s Sherawa district is as follows:

1. On the night of August 29, at 01:00 am, our unit carried out a successful attack against the military point of the Hamza Division terrorist fraction in the Biye village of Afrin’s Sherawa district. Group of terrorists was targeted and successfully attacked from close distance. As a result of the fight at close range, 10 of the terrorists were killed, 2 AK-47 and a quantity of ammunition were confiscated and a motorcycle destroyed. Besides that, several terrorists had escaped from where the clash took place.

2. That same night, at 03:00 am, and while the enemy wanted to start their operations in the area, our unit carried out a sabotage action targeting one of their military vehicles. As a result, a vehicle was completely destroyed and 5 terrorists were killed. In the aftermath of our action, groups of terrorists started a massive wide-scale operation in the area. Operation that started from combing the villages of Biye, Kefr Nebo, Birj Heider and Berade in Afrin’s Sherawa district, didn’t bring any result and after a certain time the enemy forces withdrew from the area.

3. Furthermore, on August 29 at 06:30 am, our unit carried out a sabotage action targeting two military vehicles on the road between the villages of Biye and Kefr Nebo. As a result, both of the vehicles were damaged, 4 terrorists, including the al-Sham Division (Faylaq al-Sham) commander named Khaled al-Abeed, were killed, while some others were left wounded.

The consecutive actions that had been carried out to avenge 2 our comrades martyred in the village of Biye, resulted in a death of 19 terrorists in total, a hitting of 3 military vehicles and a motorcycle and confiscation of two AK-47 (Kalashnikov) weapons and ammunition.

In retaliation for our fighters against the Turkish occupation and its mercenaries in Afrin, Idlib and other areas in North Syria, our fighters carried out on 28/08/2018 an assassination operation against the mercenary called Abu Muhammad al-Domani, one of the commander of Sultan Murad’s gangs participated in the invasion of Afrin, which committed dozens of field executions against our people, as well as looting, and kidnapping.

Our fighters ambushed for the mercenary called Abu Mohammed al-Domani in the area between the villages of Sondra and Tel Shaer located in the area of al-Raai northeast of Aleppo. They assassinated him and seized his weapon before they withdrew from the area safely.

As we have stated previously, Wrath of Olives’ Operation Room, we reaffirm our right to retaliate against the mercenaries participating in the Afrin raid in any area of North Syria, particularly Afrin, to serve as a lesson for other mercenaries.

Left over Islamic State’s improvised explosive device killed a civilian in the village of Mahkan in southeastern Deir al-Zour.

Syrian Arab Army and allies made advances against the Islamic State in northern and northwestern part of Tell al-Safa in eastern Al-Suwayda. Syrian Arab News Agency released a statement regarding the event;

Army units, in cooperation with the supporting forces, expanded control over new areas in the northern and northwestern part of al-Safa hills in the depth of Sweida Badyia (desert).

SANA reporter in Sweida said that army units operating in Abu Ghanem hill to the northeast of al-Safa hills established control over wide areas in the direction of Um Marzakh to the west to meet with the forces which are coming from the western direction amid a state of collapse among the ranks of Daesh (ISIS) terrorists after eliminating a large number of them and destroying their positions and equipment.

The reporter added that army units operating in the surroundings of Qabir al-Sheikh Hussein continued to enhance their presence and to expand their control towards al-Safa hills, killing scores of Daesh terrorists and injuring others.

The reporter indicated that army units carried out precise bombardments against positions and fortifications of the remnants of Daesh terrorists in al-Safa hills. 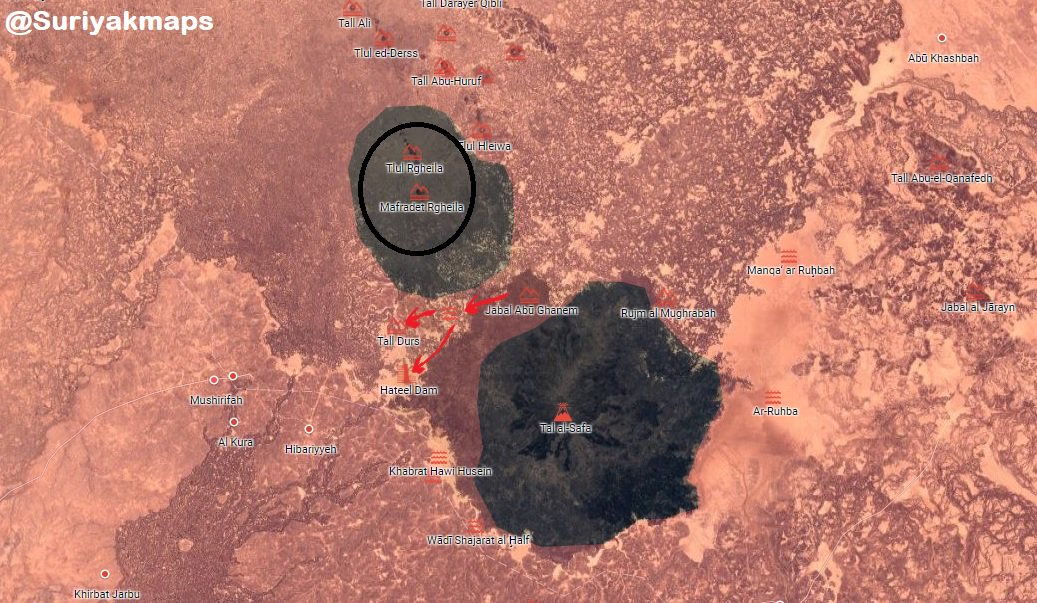 Afghan National Security Forces reportedly killed 26 and wounded 34 elements of the Islamic Emirate of Afghanistan, as well as destroyed ten motorcycles in Andar district, according to the Afghan Ministry of Defense.

Afghan National Security Forces’ commander of security in Ghazni Province, Ramadan Ali Mohseni stated that the Islamic Emirate of Afghanistan withdrew from the city of Ghazni, after suffering heavy casualties.