Hello and welcome to the 481st installment of the SWD.

On July 5, our forces targeted mercenaries guarding a military base in the area between Jinderes and Atma town in Afrin with sniper rifles. A mercenary was killed.

On July 6, our units ambushed a group of terrorists belonging to the group called Hamza Brigade on the road between Rajo and Afrin, where 3 terrorists were killed.

On July 7, the vehicle of the commander of FSA terrorists’ so-called Elite Unit was stopped in Afrin’s Bilbil district by one of our units. The mercenary called Mohammad al-Souleiman was killed in the action. On the same day our forces detonated a pre-prepared explosive device in one of the checkpoints of the terrorist group called Asafat al-Shimal in Mount Basraya (Jabal Qastal) of Shara district. 2 terrorists called Omar Kanoand Ibrahim Kano, both of whom are from Azaz, have been killed in the operation.

In the evening of July 7, our units carried out another sabotage attack against a Turkish army patrol in Afrin’s Rajo, which killed 2 soldiers.

On July 8, a Turkish terrorist and a Ahrar al-Sharqiyyah mercenary were killed in the bombing action targeting a military convoy which was participating in the combing operation in villages of Afrin’s Mabata district.

With the actions carried out between July 5-8, the number of deaths of Turkish invasion army and its mercenaries has risen to 2515.

Hayat Tahrir al-Sham’s Ibaa News Agency stated that the group arrested a Syrian government’s cell in the village of Qah, north of Idlib. The cell reportedly consisted of four individuals, who were gathering information about the group’s headquarters and checkpoints in the area.

Syrian Arab Army captured the old Daraa border / customs crossing, Hajjanah Battalion, and Gharaz area at the outskirts of the city of Daraa.

Syrian Arab News Agency stated that rebel elements in Simlin, Kafr Shams, Kafr Nasej, and Aqraba reportedly agreed to reconcile with the Syrian government. The agreement is expected to start tomorrow, with rebel elements handing over their weapons.

Islamic State-affiliated Jaysh Khalid ibn al-Walid conducted an SVBIED operation against the Syrian Arab Army and allies in the village of Zayzun. The operation was reported directly by the Islamic State’s Amaq Agency, which stated that the operation was conducted by Abu Zubair al-Ansari, allegedly killing 35 and wounding 15 elements, as well as destroying two tanks and other vehicles. 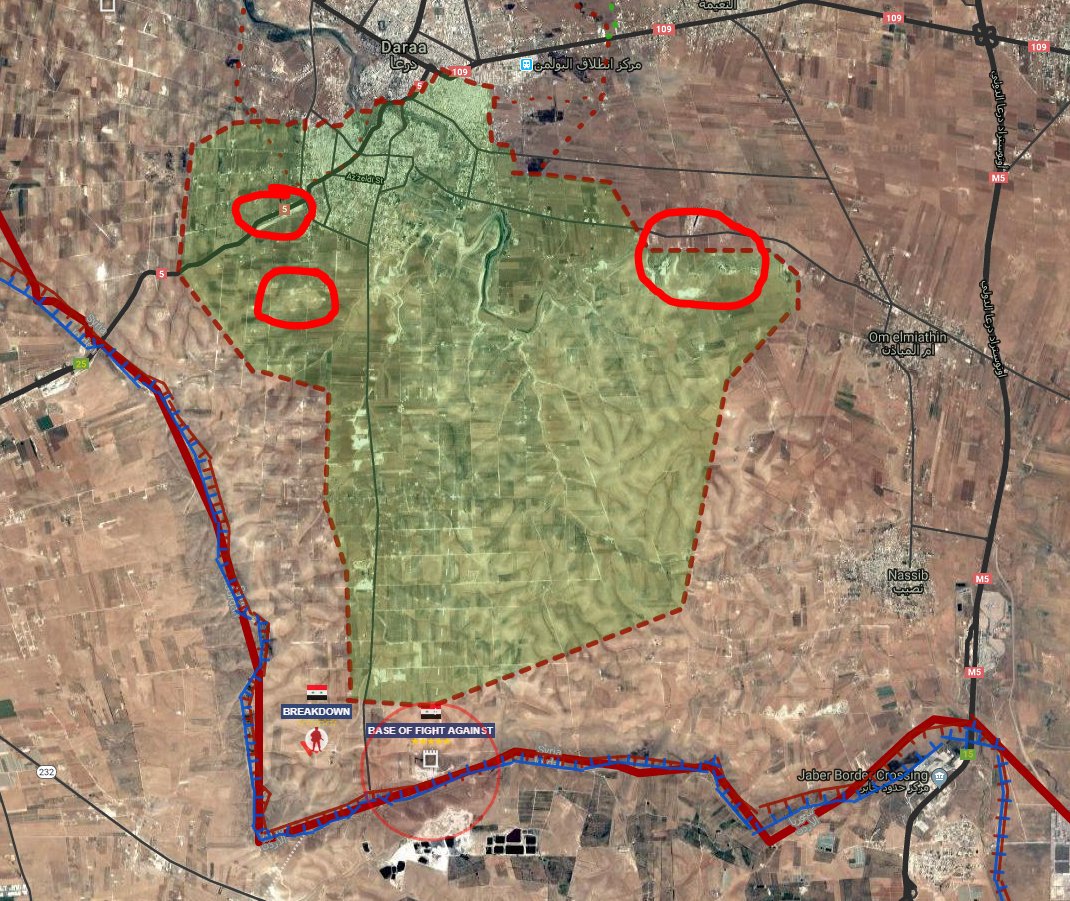 Islamic Emirate of Afghanistan ambushed and killed an element of the ‘National Directorate of Security’ in Bagh Sharkat area of the city of Kunduz.

Islamic Emirate of Afghanistan overran and destroyed an Afghan Local Police’s checkpoint in Sherzi Baba area of Saydabad district. Afghan Local Police’s commander Muhibullah and two other elements of the police were killed, while one element was wounded and another arrested in the encounter. Islamic Emirate of Afghanistan seized a vehicle, a PK machine gun, an RPG launcher, and six assault rifles from the checkpoint.

Afghan National Security Forces killed 37 and wounded 23 elements of the Islamic Emirate of Afghanistan, as well as destroyed a vehicle and three motorcycles in Zana Khan, Muqur, and Andar districts, according to the Afghan Ministry of Defense.

Afghan National Security Forces killed 20 and wounded 28 elements of the Islamic Emirate of Afghanistan in Pur Chaman district, according to the Afghan Ministry of Defense.

Afghan National Security Forces killed 13 elements of the Islamic Emirate of Afghanistan and destroyed a vehicle in Daychopan and Shinkay district. Islamic Emirate of Afghanistan killed 11 elements of the Afghan National Security Forces, as well as destroyed five armored vehicles in an attack in Daycopan district.