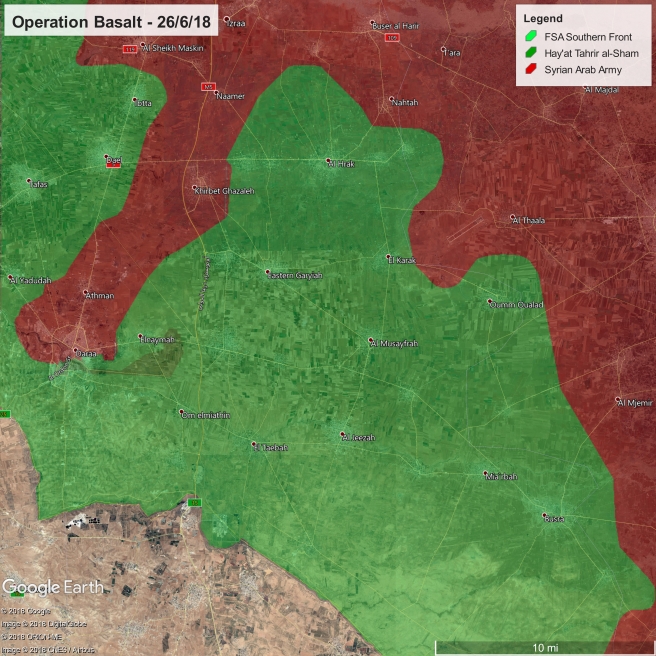 After capturing the crucial town of Busra al-Harir in a pre-dawn assault, the Syrian Arab Army continued its assault to the south. Army troops seized the village of Maliha al-Tash and the town of Nahtah. So far there has been no rebel counterattack. This advance puts the Army in a position to mount an assault on a chain of towns centered around the rebel stronghold and key government target of al-Hirak.

So far, the Syrian Army has not engaged in any offensive activities on any other frontlines with the rebels in the south. Western Daraa, Quneitra, and even the Suwayda frontline remained untouched, with only Daraa city facing serious attacks by rockets and airstrikes.

Due to this rapid advance, the Syrian government has assumed full control of the al-Lajat plateau, seizing twenty villages from Free Syrian Army forces. Some of these rebels surrendered, while others fled the region southward to fight another day.

The attack is part of Operation Basalt, a campaign intended to retake the Lajat area and the town of Busra al-Harir. Now that these objectives are complete, the Syrian Army will attempt to retake the town of al-Hirak and ultimately the Nassib bording crossing, allowing Syria to resume trade with Jordan.

Below, the course of the operation over the past week can be seen in the map animation.