Hello and welcome to the 459th installment of the SWD.

Turkish Armed Forces’ convoy entered northern Manbij region near the border with the Syrian Democratic Forces-held territory north of the city. The convoy will reportedly begin joint patrols with the United States Army in the region along the frontline, as part of an agreement agreed upon by Turkey and the United States. The agreement also includes withdrawal of Yekîneyên Parastina Gel (People’s Protection Units) from the city of Manbij, as well as formation of local administration and military & civilian councils in Manbij.

Unknown gunmen assassinated Jaysh al-Ahrar’s deputy commander-in-chief, Sheikh Khalil Ismael Arslan (Abu Ismael Jawbas) and his eldest son Ismael in front of a mosque in the village of Jawbas. After the assassination, Jaysh al-Ahrar launched security operations against the Islamic State’s cells in Jawbas village, reportedly killing one and capturing one element, while one civilian was wounded during clashes between the two.

Improvised explosive device wounded three civilians on the road between Kansafra and Balyun, south of Idlib.

Ahrar al-Sham’s head of Hayat al-Dawat wa al-Irshad (Advocacy and Guidance Committee/Body), Muwafaq al-Omar announced his resignation from Ahrar al-Sham and Jabhat Tahrir Suriya. Al-Omar stated that he worked with Ahrar al-Sham for 26 months and left the faction without any problems or disagreements, however, he did not specify the reason for his resignation.

Left over Islamic State’s improvised explosive device killed a civilian in the village of Al-Masoudiyah. 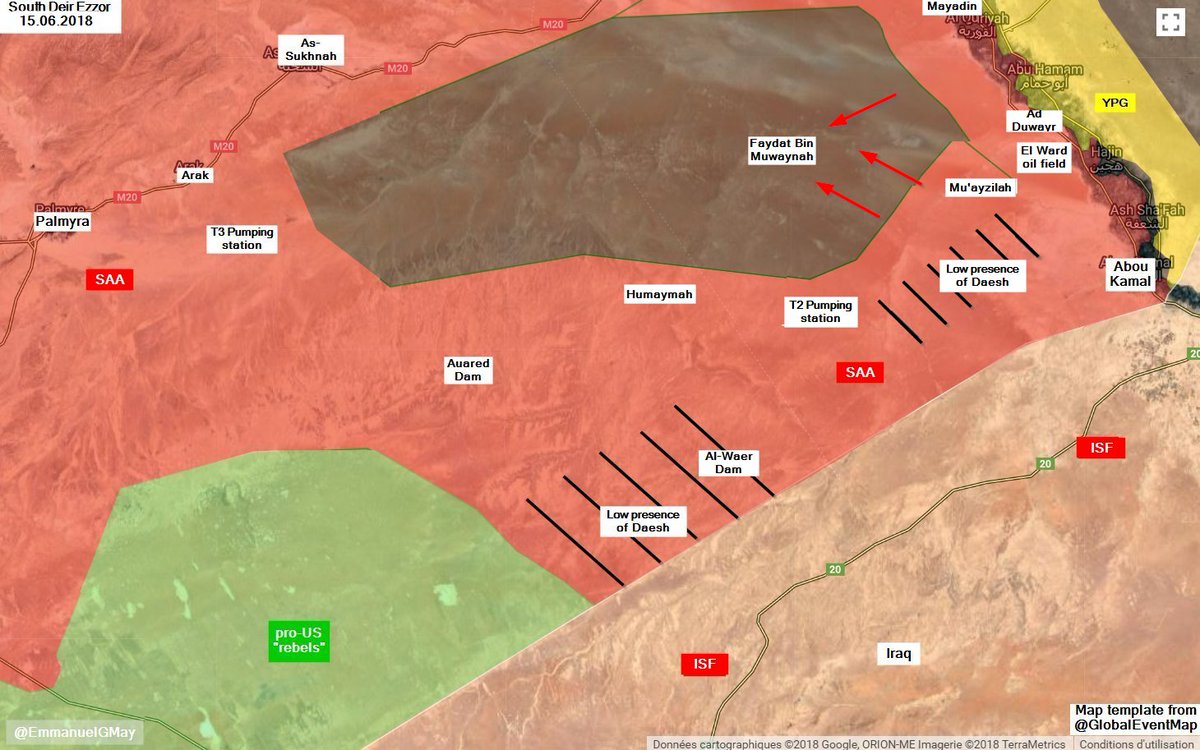 Unknown warplanes, allegedly belonging to the United States Air Force conducted air raids against the positions of Iraqi Al-Hashd al-Shaabi (Popular Mobilization Units) and other militias affiliated with the Syrian Arab Army in Al-Hari area, southeast of Al-Bukamal (Albu Kamal). Al-Hashd al-Shaabi stated that the air raids were conducted by the United States and targeted its 45th and 46th Brigades, killing 22 and wounding 12 elements. However, CJTF-OIR‘s spokesman, Colonel Sean Ryan denied reports about the coalition conducting strikes near Al-Bukamal. Several other reports claimed that the raids were conducted by the Israeli Air Force.

Islamic Emirate of Afghanistan assassinated the governor of Ghani Khel district, Subhanullah and two of his guards in the district.

Between the 11th and the 17th of June 2018 CJTF-OIR has conducted 23 strikes in Syria. CJTF-OIR‘s main focus in Syria at the moment is Deir al-Zour-Albu Kamal region where they did 13 strikes supporting SDF‘s operations against IS destroying six IS supply routes, three IS vehicles, and an IS-held building.

Other area where ten strikes occurred is Al-Shadaddi, destroying five IS fighting positions, four IS lines of communication, an IS tactical vehicle, an IS headquarters, an IS logistics hub, an IS vehicle, and an IS anti-air artillery system. Full report on CJTF-OIR strikes conducted in both Syria & Iraq can be found here.