Hello and welcome to the 434th installment of the SWD.

Vehicle-borne improvised explosive device exploded in a market area at one of the entrances to the city of Al-Bab. Reports suggest that four civilians were wounded by the explosion.

After conducting investigations and follow-up, special units of the Military Intelligence، that belong to Syrian Democratic Forces ( SDF) carried out a special operation on Saturday, 19 May 2018, led to arressting a group of ISIS terrorrists that was headed by Adrian Lionel Kayali whose nickname is Abu Osama, he has been arrested with his wife. The trrorrist Abu Osama is considered one of the most dangerous terrorrists in ISIS ranks and had a role in launching the terrorrist attacks that hit paris in November 2015, and also took apart in the attacks that hit Niece city in 14 July, 2016 .

Adrian Kayali / Abu Osama is from French origin, was born in 1983, and converted to Musilim reliegen in 2003, and was influnced by jihdist idologey, he was arrested in France in 2010 on charges of belonging to terrorist organizations and later was released, then he joined ISIS ranks and crossed to Syria on th 6 of March, 2015 through Tel Ebyad border gate which was considered the official border between Turkey and ISIS.

After the terrorists had lost many cities including Reqqeh province where Abu ossama was hidden there looking for a way to escape into Turkey, then Europ, our forces was able to arrest him.

Syrian Salvation Government, which operates in Hayat Tahrir al-Sham-held areas, asked civilians to register their vehicles in the ‘Directorate of Transport’, so that it is possible to control and find out the license plates. Syrian Salvation Government’s “suggestion” comes as a response to the recent waves of assassinations, kidnappings, and improvised explosive device attacks in the governorate. The government also called on preachers in mosques to guide and encourage civilians to register their vehicles.

Hayat Tahrir al-Sham released media activist / reporter Ahmad al-Akhras, who was arrested along with Rami al-Raslan by the group on the 29th of April in the city of Darkush, on the charges of filming in an area without permission from the security forces. Al-Raslan who was arrested with Al-Akhras was released a day after being arrested.

Unknown missiles, reportedly launched by the Israeli Air Force targeted a military airport in the governorate. Syrian Arab News Agency stated that explosions were heard in the vicinity of Al-Dhaba airport. The agency also stated that the Syrian air defense intercepted the missiles.

Improvised explosive device targeted a vehicle of Jamal al-Labad, member of the Al-Sanamayn’s reconciliation committee. Al-Labad and two other individuals were wounded in the incident. Reports suggest that Al-Labad will be transferred to a hospital in Damascus for treatment. Similar incident occurred on the 3rd of May, when an improvised explosive device targeted a market near Al-Barid checkpoint in the city of Al-Sanamayn, killing one and wounding eight civilians, including Al-Labad. 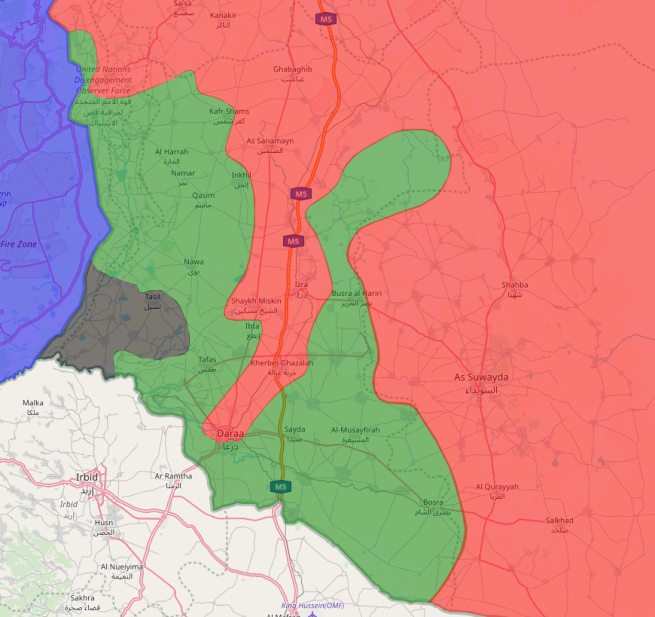 Islamic Emirate of Afghanistan killed one and wounded one element of the ‘National Directorate of Security’ in Imam Sahib district.

Afghan National Security Forces killed an element of the Islamic Emirate of Afghanistan in Khogyani district.

Seven elements of the Afghan National Army surrendered to the Islamic Emirate of Afghanistan with their weapons in Khogyani, Ghani Khel, Spin Ghar, and Hisarak districts.

Residents of Baidak Malmi, Bagh Malmi, Ashlan and Taghman villages in Chahar Sada district pledged their allegiance to the Islamic Emirate of Afghanistan. The aforementioned villages contain more than 400 families.

Islamic Emirate of Afghanistan’s Al-Emarah News stated that the group seized five Afghan National Army’s posts in Gelan and Deh Yak districts, killing 14 and wounding seven soldiers in the process. According to the Al-Emarah, the areas captured by the group contain more than 7000 houses. However, Afghan Ministry of Defense stated that the Afghan National Security Forces killed 42 and wounded 31 elements of the Islamic Emirate of Afghanistan, as well as seized an RPG launcher and seven improvised explosive devices in Gelan, Qarabagh, and Ghazni districts.

Afghan National Police’s element surrendered to the Islamic Emirate of Afghanistan with his weapon in Sharana district.

The structure was a known meeting location for prominent Taliban leaders, where they planned and facilitated attacks against Afghan National Defense and Security Forces, who are supporting election security in the area.