Hello and welcome to the 398th installment of the SWD.

Several Free Syrian Army’s factions joined the newly-formed Raqqa Military Council, which is reportedly supported by Turkey. The factions that joined the council are; Suqour al-Sham, Al-Izza Biallah, Aswad al-Islam, Authenticity and Development Front, Tajammu Ahrar al-Tabqa, and Katibat al-Bara. Raqqa Military Council’s aims are to expel the Syrian Democratic Forces from the localities in Raqqa, to protect the people and to establish institutions of the Syrian Interim Government in the governorate.

Hayat Tahrir al-Sham and Jabhat Tahrir Suriya backed by Suqour al-Sham clashed around Marayan and Al-Rami villages. According to the reports, a civilian vehicle on the road between the two aforementioned villages came under fire by both sides, which wounded four civilians. Suqour al-Sham’s commander, Abu Issa al-Sheikh stated that one of his fighters was killed and his son wounded in the clashes.

Syrian Arab News Agency stated that five thousands individuals, including 1500 rebel fighters will be evacuated from Al-Dumayr to northern Aleppo.

Syrian Arab Army and allies started an attack against rebel factions in the Eastern Qalamoun region. The attack started on Al-Ruhaybah front, with reports that the Syrian Arab Army captured Hawash area and several farms around Al-Ruhaybah. Syrian Arab Army’s advances in the farms area were confirmed by the spokesman of the Free Syrian Army’s Quwat al-Shahid Ahmad al-Abdo, Fares al-Munajid. 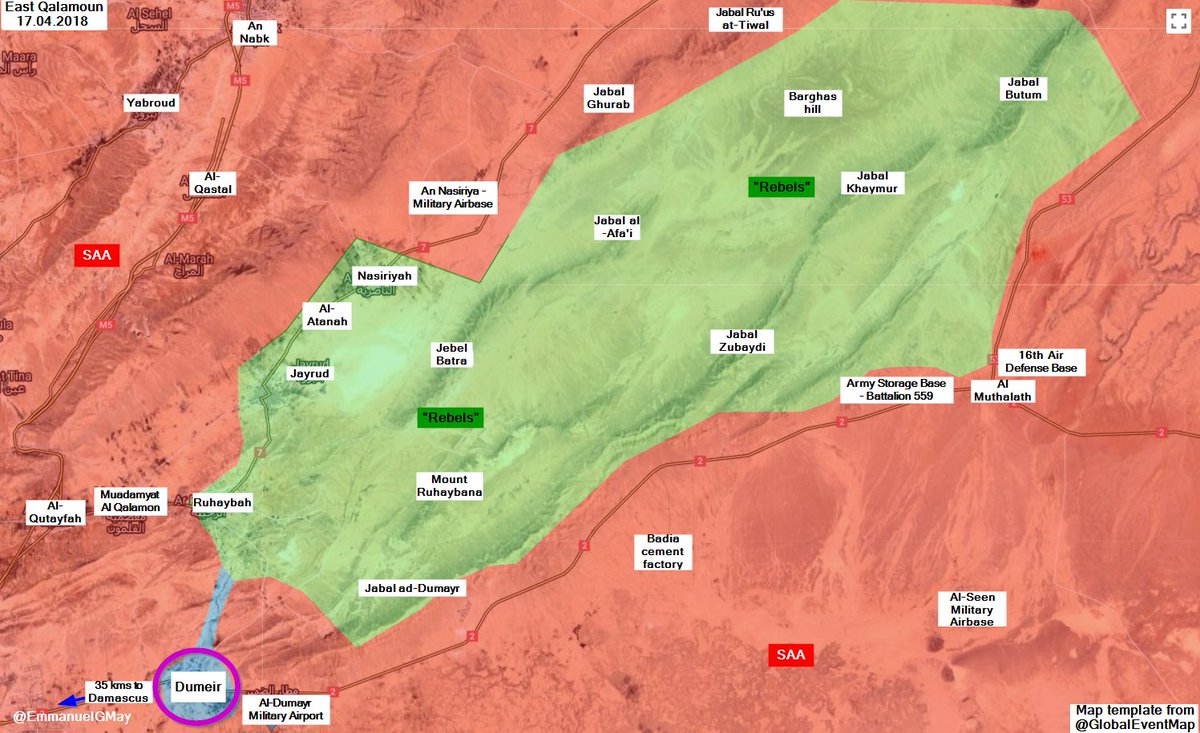 Afghan National Security Forces killed 11 and wounded 16 elements of the Islamic Emirate of Afghanistan in Nijrab district, according to the Afghan Ministry of Defense.

Islamic State assassinated two elements of the Afghan National Police in the city of Jalalabad, capital of Nangarhar Province.

Afghan National Security Forces killed 15 and wounded 12 elements of the Islamic Emirate of Afghanistan, as well as destroyed 11 vehicles and several weapons depots and ammunition caches in Waghaz, Andar, and Muqur districts, according to the Afghan Ministry of Defense.

Islamic Emirate of Afghanistan’s snipers killed two elements of the Afghan Local Police and one element of the Afghan National Army in Nawa-I-Barakzayi district.

Islamic Emirate of Afghanistan ambushed and killed an element of the ‘National Directorate of Security’ in the 9th Police District of the city of Kandahar.

Islamic Emirate of Afghanistan’s vehicle-borne improvised explosive device destroyed an Afghan Border Police’s vehicle in Khawaja area of the 4th Police District of the city of Kandahar. The explosion killed Afghan Border Police’s chief of Spin Boldak district, Janan Mama and five other elements of the police. Separately, three elements of the Afghan National Army were wounded by an improvised explosive device in Wandoz area of Arghistan district.