Hello and welcome to the 374th installment of the SWD. 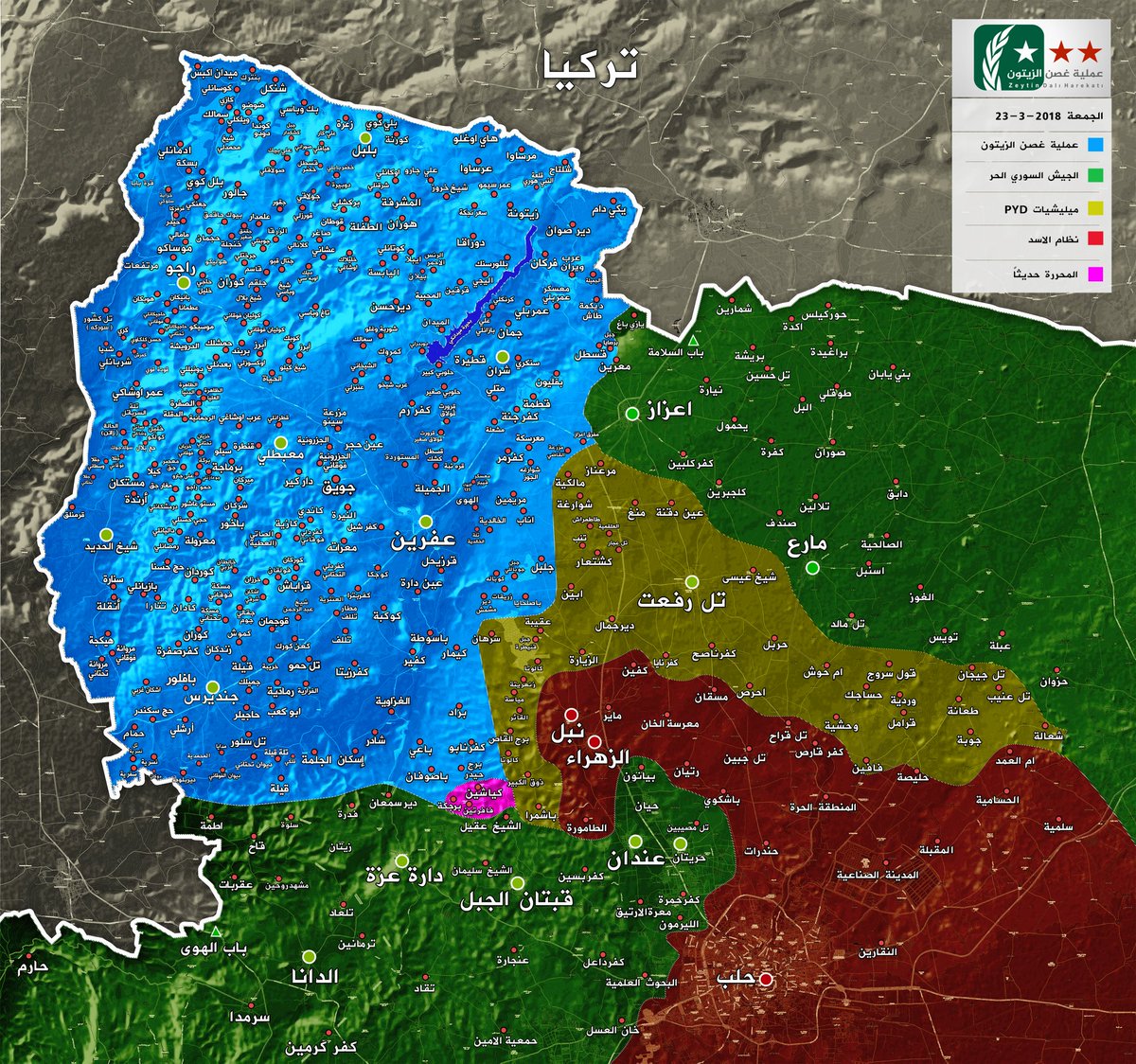 Unknown gunmen stormed Faylaq al-Sham’s headquarters in Al-Ghassaniyah village, west of Jisr al-Shughur. Four elements of Faylaq al-Sham and one attacker were killed in the encounter. The attackers looted weapons and vehicles from the headquarters. Several reports suggest that Jund al-Aqsa’s cells conducted the attack.

Faylaq al-Rahman reached an agreement with Russia, regarding the former’s evacuation from the East Ghouta towards Idlib. The agreement includes handing over Ain Terma, Arbeen, Zamalka, and Jobar to the Russian Military Police. Reports suggest that the Syrian Arab Army already established full control over Ain Terma. The agreement between the two sides also includes treatment of sick and wounded individuals from the East Ghouta in the hospitals of Damascus, through Syrian Arab Red Crescent. After the treatment, the individuals will be able to choose between returning to the East Ghouta or be transported towards Idlib. The evacuation is expected to start tomorrow in Arbeen. 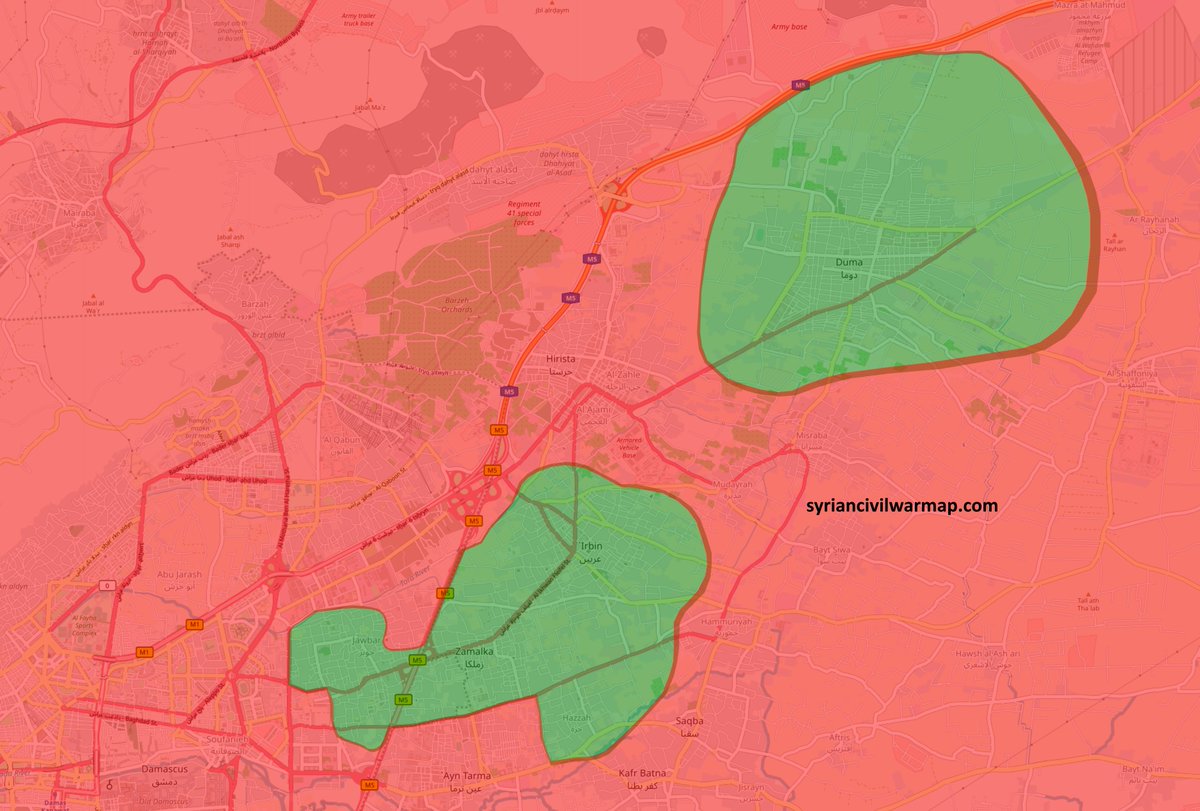 Islamic State launched an attack on Iraqi Army’s barracks in Al-Khazrani area near Mandali. Islamic State’s Amaq Agency stated that four elements of the Iraqi Army were killed and a Humvee destroyed in the attack.

Afghan National Security Forces killed 41 and wounded 17 elements of the Islamic Emirate of Afghanistan (Taliban), as well as destroyed several weapons depots and ammunition caches in Pashtun Kot, Kohistan, and Shirin Tagab districts, according to the Afghan Ministry of Defense.

Two elements of the Afghan National Police and one element of the Afghan Local Police surrendered to the Islamic Emirate of Afghanistan with their weapons in Qargin district.

Islamic Emirate of Afghanistan ambushed and killed an element of the Afghan Local Police, as well as wounded another element in Khogyani district.

Islamic Emirate of Afghanistan’s snipers killed three and wounded one element of the Afghan National Army in Joy Kar area of Murghab district.

Islamic Emirate of Afghanistan arrested five elements of the Afghan Local Police in Band Dari area of Charsada district, as they were on their way towards Chaghcharan (Firuzkoh) district.

Islamic Emirate of Afghanistan’s sniper wounded an element of the Afghan National Army in the city of Ghazni.

Vehicle-borne improvised explosive device exploded in the city of Lashkar Gah, capital of Helmand Province. Reports suggest that 14 people were killed and more than 50 wounded by the explosion.

Islamic Emirate of Afghanistan attacked Afghan National Army’s post in Sarkar Vialla area of the city of Lashkar Gah. Five elements of the Afghan National Army were reportedly killed and two wounded in the attack, while the remaining elements withdrew from the area. Islamic Emirate of Afghanistan seized four assault rifles and an RPG launcher from the post.

Between the 16th and the 22nd of March 2018 CJTF-OIR has conducted nine strikes in Syria. CJTF-OIR‘s main focus in Syria at the moment is Deir al-Zour-Albu Kamal region where they did eight strikes supporting SDF‘s operations against IS destroying an IS-held building, a VBIED factory, an IS staging area, and two weapon caches.

Other area where one strike occurred is Al-Shadaddi, destroying an IS-held building. Full report on CJTF-OIR strikes conducted in both Syria & Iraq can be found here.

Islamic State’s Amaq Agency claimed responsibility for today’s hostage situation in Trèbes. Three people and the attacker were killed in the incident.