Hello and welcome to the 327th installment of the SWD.

General Staff of the Republic of Turkey announced death of two and injury of five elements of the Turkish Armed Forces due to the clashes with the YPG. This announcement brings Turkish Armed Forces’ death toll in the operation ‘Olive Branch’ to 14 soldiers.

Newly-formed rebel operations room Dahar al-Ghaza, backed by Hayat Tahrir al-Sham and Turkistan Islamic Party launched an attack against the Syrian Arab Army’s positions in the vicinity of Abu al-Duhur in the eastern Idlib. Reports suggest that the rebel forces captured Tell al-Sultan, Tell Syriatel, Tell Kalbah, Al-Mushayrifah, and several other localities. However, these localities should be considered as disputed for now, as pro-government sources claim that rebels’ attacks were repelled.

The operations of the “Roll Back Invaders” group, which was formed on Saturday, began a military attack targeting the positions of the Assad forces and Iranian militias in the eastern countryside of Idlib. Within hours of the battle, they managed to regain control of several villages and hills. 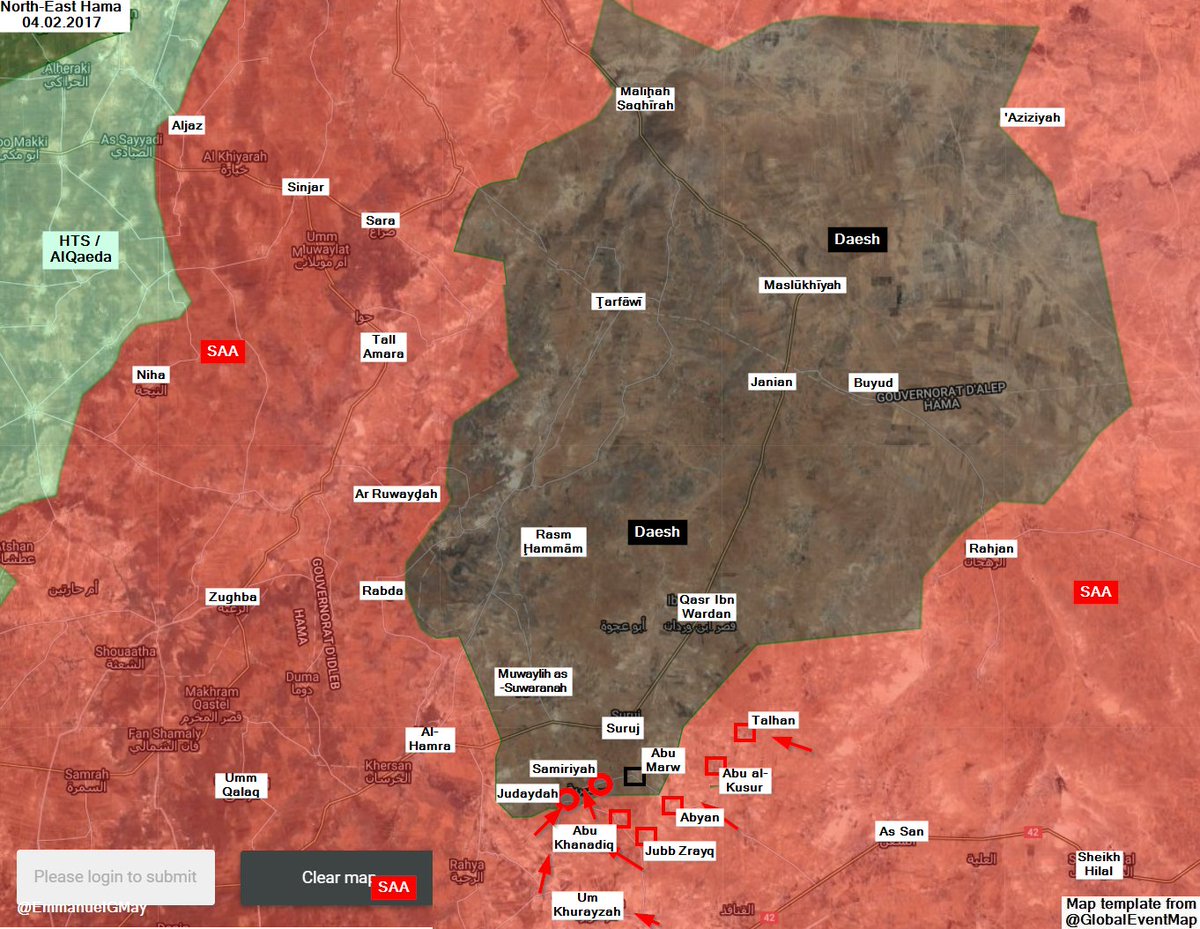 Syrian Arab Army’s artillery and Syrian Arab Air Force targeted Douma, Al-Shifuniyah, and Arbeen in the East Ghouta. According to the Syrian Civil Defense (The White Helmets), four civilians were killed by the targeting of Douma.

Rebel forces in the East Ghouta shelled Ash al-Warwar neighborhood of the city of Damascus and Harasta. According to the Syrian Arab News Agency, seven civilians were wounded by the shelling of Harasta.

‘House of Justice in Houran’ issued a decision to arrest three individuals from Daraa that participated in the Syrian National Dialogue Congress in Sochi. The house of justice accused Khalid al-Shara, Dr. Ayesh Ghanim, and Faysal al-Shahadat of treason. Khalid Al-Shara was already arrested yesterday by the Free Syrian Army’s Katibat al-Shahid Muhammad al-Shara and is expected to be handed over to the house of justice soon.

Islamic State’s improvised explosive devices destroyed two vehicles of the Iraqi Army near the city of Al-Rutbah in the western Anbar.

Islamic Emirate of Afghanistan assassinated an element of the Afghan Local Police in the city of Mihtarlam, and wounded two elements in an ambush in Alishing district.

National Directorate of Security arrested two elements of the Islamic Emirate of Afghanistan in Jalalabad and Sherzad districts.

Afghan National Security Forces’ element was wounded in clashes with the Islamic Emirate of Afghanistan in the city of Khost.

Afghan National Security Forces killed 20 and wounded seven elements of the Islamic Emirate of Afghanistan in Deh Yak district, according to the Afghan Ministry of Defense. Islamic Emirate of Afghanistan reported that six elements of the Afghan National Army were killed and eight wounded, as well as a tank destroyed during the clashes in Deh Yak district.

Islamic Emirate of Afghanistan’s snipers wounded seven elements of the Afghan National Army in Shishar area of Khas Urozgan district and one element in Lablan area of Deh Rawud district. Similarly, Afghan National Police’s element was killed by a sniper in Nazayo area of Chora district.