Hello and welcome to the 326th installment of the SWD.

Syrian Democratic Forces’ YPG targeted and destroyed Turkish Armed Forces’ tank (presumably a Leopard 2A4) with an anti-tank guided missile near Sheikh Haruz. General Staff of the Republic of Turkey announced that five elements of the Turkish Land Forces were killed in the destruction of the tank. General Staff also stated that two additional elements of the Turkish Land Forces were killed today in the clashes with the YPG. This announcement brings Turkish Armed Forces’ death toll in the operation ‘Olive Branch’ (AR: Ghasin al-Zaytun, TR: Zeytin Dalı) to 12 soldiers.

Syrian Democratic Forces’ YPG shelled Turkey-backed Free Syrian Army-held city of Azaz in the northern Aleppo. According to the reports, nine civilians were wounded by the shelling. Free Syrian Army’s Jaysh al-Nasr downed Russian Air Force’s Sukhoi Su-25 warplane with MANPADS, as it was conducting air raids over the city of Saraqib. The warplane crashed in Khan al-Sabil’s area, near the village of Maasran, reportedly hitting a building while crashing and killing three civilians. The pilot of the downed warplane parachuted safely to the ground, but was reportedly killed in the clashes with the rebels. Hayat Tahrir al-Sham also claimed responsibility for the downing of the Russian warplane, through its media outlet Ibaa News Agency. 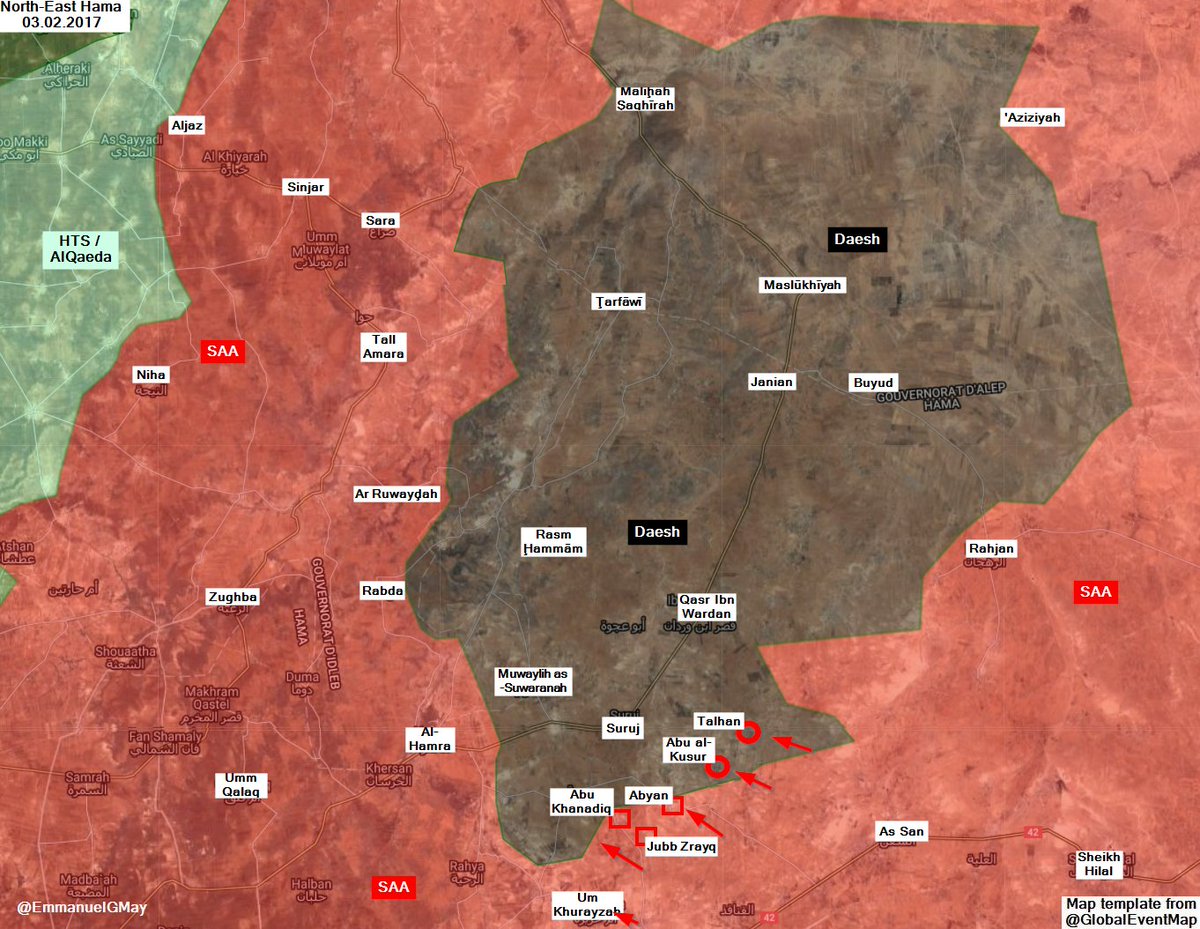 Islamic State’s Amaq Agency reported that two element of the Syrian Democratic Forces were killed by an RPG in Al-Soussa area, north of Al-Baghouz village.

Free Syrian Army’s Katibat al-Shahid Muhammad al-Shara and Al-Malahim and Al-Shara tribes arrested Khalid al-Shara when he entered Free Syrian Army-held areas through Dael crossing. Khalid al-Shara was arrested for treason as he returned from the Syrian National Dialogue Congress in Sochi. Houran Revolutionary Council demanded from the ‘House of Justice in Houran’ to charge other Daraa’s participants of Sochi with treason. Khalid Al-Shara is currently imprisoned in Katibat al-Shahid Muhammad al-Shara’s prison, until the ‘House of Justice in Houran’ requests his extradition.

Hayat Tahrir al-Sham detonated a vehicle-borne improvised explosive device at the outskirts of Dael. The vehicle was found in the locality and was detonated to prevent civilian casualties and material damage. Free Syrian Police and Syrian Civil Defense (Th White Helmets) were present at the time of detonation.

Islamic State’s improvised explosive device killed two and wounded several elements of the Iraqi Federal Police near the border between Syria and Iraq, according to the Islamic State’s Amaq Agency.

Afghan National Security Forces killed 19 and wounded 23 elements of the Islamic Emirate of Afghanistan (Taliban) in Khaja Sahib Posh district, according to the Afghan Ministry of Defense.

Three elements of the Afghan Local Police surrendered to the Islamic Emirate of Afghanistan in Gurziwan district.

Islamic Emirate of Afghanistan overran important Afghan National Army’s military base in Kala Ragh area of Chora district. Three elements of the Afghan National Army were reportedly killed and two wounded in the clashes for the base, while the remaining elements withdrew from the base. Islamic Emirate of Afghanistan seized two PK machine guns, an RPG launcher, and large quantities of ammunition from the base.