Hello and welcome to the 322nd installment of the SWD.

Syrian Democratic Forces’ Yekîneyên Parastina Gel shelled city of Reyhanlı in Turkey’s Hatay Province, without any information about the casualties.

Syrian Democratic Forces’ Yekîneyên Parastina Jin (Women’s Protection Units) press center announced the death of one of its correspondents, Avrin Mahsum, as he was covering clashes with the Free Syrian Army in Rajo subdistrict on the 27th of January. Another correspondent, Aras Mahsum was seriously wounded yesterday, while covering clashes in Afrin region.

Last night, a large Turkish Armed Forces’ convoy, escorted by Hayat Tahrir al-Sham and Turkish Air Force entered Syria through Kafr Lusin, heading for Al-Eis in the southern Aleppo countryside, in order to establish an observation point. However, the convoy came under Syrian Arab Army’s artillery shelling in Al-Kamari and Jisr al-Barqoum areas while on its way towards Al-Eis, which forced the convoy to retreat to Al-Tawamah village in Al-Atarib area. Today, Turkish Armed Forces’ convoy attempted to reach Al-Eis again, however, it was targeted by a VBIED in Al-Atarib area. The explosion destroyed one vehicle, as well as killed one and wounded two Turkish Armed Forces’ elements. After the explosion, the convoy headed towards Bab al-Hawa border crossing and returned to Turkey.

Syrian Arab Army captured a hill north of Khanafis from the Islamic State in the northeastern Hama. 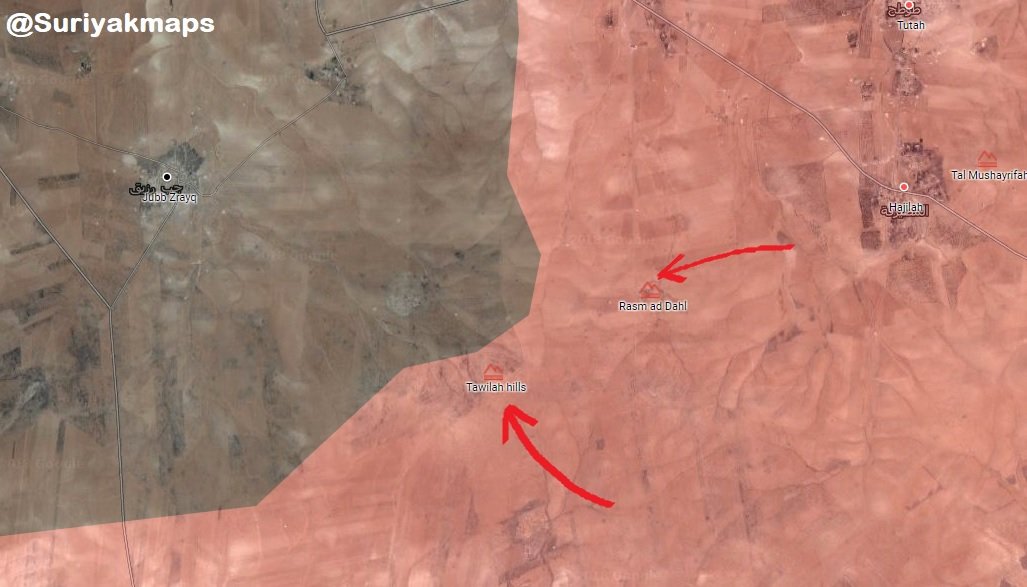 Syrian Arab Army destroyed five Islamic State’s vehicles, reportedly killing all of the elements on board in the desertous area of the eastern Deir al-Zour governorate.

Left over Islamic State’s rocket-propelled grenade exploded in Syrian Democratic Forces-held city of Gharanij in the eastern Deir al-Zour. Reports suggest that four children were killed in the explosion.

Improvised explosive device targeted the vehicle of the Free Syrian Army’s Jaysh al-Thawra in the city of Saida. According to the reports, commander of Jaysh al-Thawra’s Katibat Darea Kheil was killed and several elements wounded in the explosion. The wounded elements were transferred to a hospital in Nasib, near the border with Jordan. Jaysh al-Thawra stated that either Syrian Arab Army or Islamic State-affiliated Jaysh Khalid ibn al-Walid are responsible for the explosion.

National Directorate of Security discovered a large Islamic State’s base/hideout in Qalqa area of Kote Sangi neighborhood, which is part of the Fifth District of the city of Kabul. National Directorate of Security reportedly seized large quantities of weapons and ammunition from the base. Reports suggest that Islamic State’s inghimasi (suicide fighters) who raided Afghan National Army’s military base in the city of Kabul yesterday were using the base.

Two elements of the Afghan National Army surrendered to the Islamic Emirate of Afghanistan in Akazu area of Murghab district.