Hello and welcome to the 319th installment of the SWD.

Turkey-backed Free Syrian Army, backed by Turkish Air and Land Forces captured several localities from the Syrian Democratic Forces’ Yekîneyên Parastina Gel (People’s Protection Units) in Afrin region, as a part of the operation ‘Olive Branch’ (AR: Ghasin al-Zaytun, TR: Zeytin Dalı). Free Syrian Army captured Ali Biski, point 740 and a training camp in Rajo subdistrict, and Tell al-Marsidis and several other hills in Jindires subdistrict. Two YPG elements were reported as killed and one confirmed as captured during the battles for Ali Biski village, while at least one YPG element was killed in the clashes for Tell al-Marsidis and nearby areas. Faylaq al-Sham’s commander, First Lieutenant Mahmoud al-Dams (Abu Rakan) was killed in today’s clashes with YPG in Afrin region.

Turkish Armed Forces conducted strikes over 42 targets in Afrin region. The strikes were conducted by 22 Turkish Air Force’s warplanes. According to the reports, several civilians were wounded by the airstrikes over Rajo, Bulbul, Kafri Kur, and Hamam. Turkish Armed Forces also stated that at least 53 elements of Yekîneyên Parastina Gel were “neutralized” today and 447 since the start of the operation ‘Olive Branch’.

Syrian Democratic Forces’ Yekîneyên Parastina Gel shelled city of Kilis in Turkey’s Kilis Province. According to the reports, two civilians were wounded by the shelling of the locality.

Syrian Democratic Forces’ Yekîneyên Parastina Gel released 55 military prisoners in Afrin, and called on the rebel factions operating in the northern Syria to do the same. One of the 55 released individuals is a commander in Free Syrian Army’s Al-Jabhat al-Shamiya. 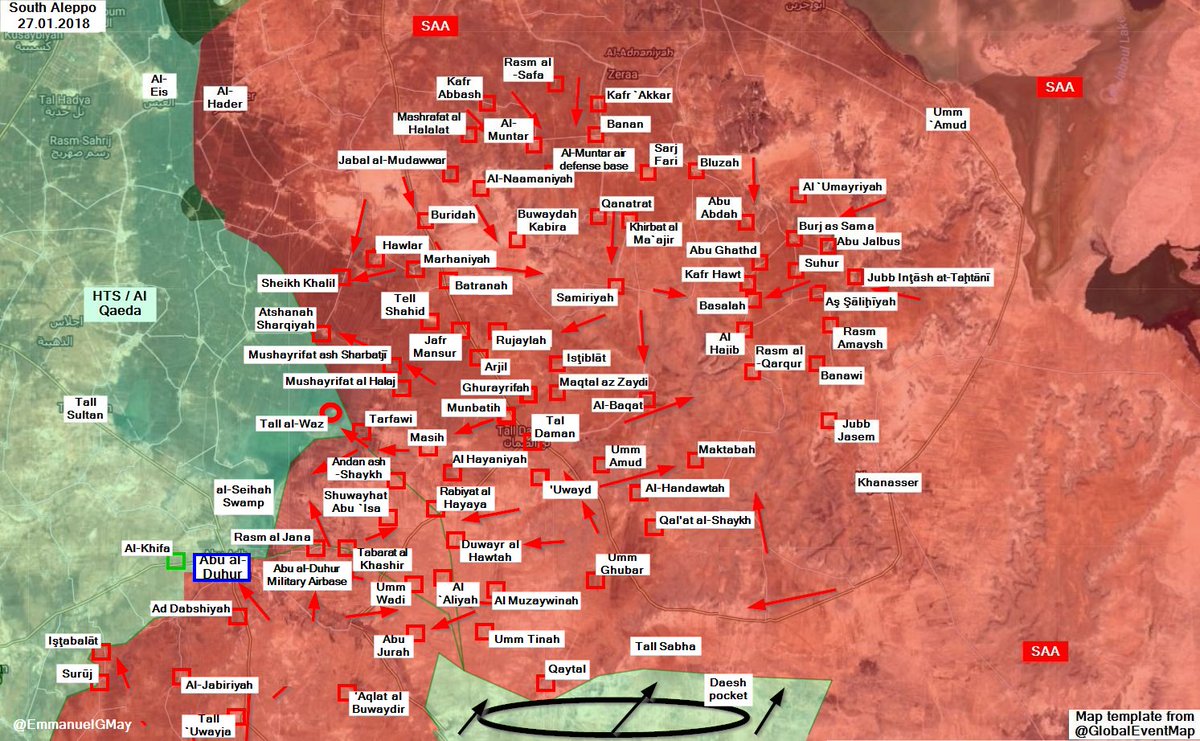 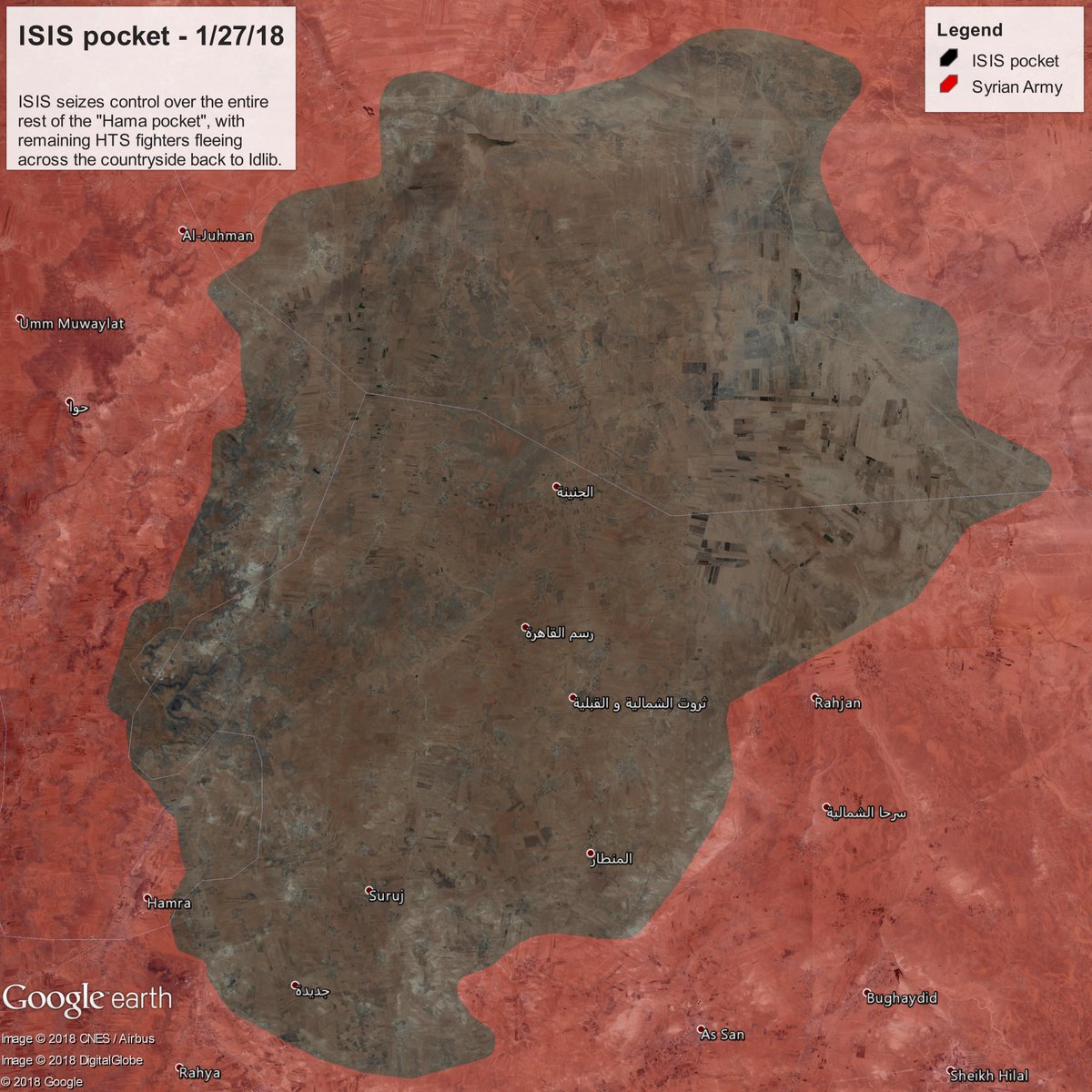 Islamic State’s Amaq Agency reported that two Syrian Democratic Forces’ elements were killed and one wounded by an RPG in the vicinity of Al-Bahra village, northwest of Hajin.

Syrian Arab Army’s artillery shelled Harasta, Hazrama, Al-Nashabiyah, Arbeen, Jisreen, and Douma in the East Ghouta. According to the Syrian Civil Defense (The White Helmets), two civilians were killed and ten wounded by the shelling of Harasta.

Iraqi Army’s 8th Infantry Brigade, backed by CJTF-OIR conducted an operation against the Islamic State’s gathering in Al-Baghdadi area. Iraqi forces raided Islamic State’s gathering and arrested Islamic State’s commander Karim Afat Ali al-Samarad. However, Iraqi forces came under the attack after arresting Al-Samarad and were forced to retreat to their headquarters. During the withdrawal, the forces spotted an unknown convoy arriving to the area, which was then targeted by CJTF-OIR‘s helicopters. Later it turned out that the convoy belonged to the local tribal fighters and police. CJTF-OIR‘s friendly fire incident resulted in killing of seven and injury of 19 local elements.

Afghan National Security Forces conducted large-scale operations against the Islamic Emirate of Afghanistan in the province, killing 25 and wounding 17 elements of the group, according to the Afghan Ministry of Defense.

Afghan National Security Forces conducted large-scale operations against the Islamic State in Achin and Haska Meyna (Deh Bala) districts, killing 31 elements of the group, according to the Afghan Ministry of Defense. Afghan National Security Forces also conducted operations against the Islamic Emirate of Afghanistan in Lal Pur district, killing three elements of the group and arresting six individuals accused of belonging to the group.

Islamic Emirate of Afghanistan’s improvised explosive device targeted the vehicle of the Afghan National Army’s commander Abdullah in Qala Yar area of Adraskan district. The explosion killed the commander and two of his bodyguards, as well as wounded two bodyguards.

Islamic Emirate of Afghanistan’s snipers killed two and wounded one element of the Afghan National Army in Haji Salim village of Taneh area.

Islamic Emirate of Afghanistan conducted an SVBIED attack against the gathering of the Afghan National Army, Afghan National Police, and Afghan Local Police’s elements in a military base in Qari area of Nad Ali district. The attack was conducted by Nour Ahmad Zarqawi Helmandi. According to the Islamic Emirate of Afghanistan, 67 elements were killed and wounded, as well as seven vehicles and the military base destroyed in the attack.