Hello and welcome to the 311th installment of the SWD.

Before the Turkey-led Saif al-Furat operation against the Syrian Democratic Forces begins, Russian soldiers will withdraw its elements from Afrin region, according to the Turkey’s Minister of National Defense, Nurettin Canikli. Several reports suggested that Russian elements started withdrawing from their base in Kafr Jana, while other reports said that the Russian troops briefly retreated from the base, due to heavy shelling on the surrounding areas by Turkey and Turkey-backed Free Syrian Army.

Syrian Democratic Forces shelled the city of Azaz last night and reportedly targeted psychiatric hospital in the city. According to the reports, one of the shells landed and exploded in women’s dormitory, wounding over a dozen of civilians.

Demonstrations were held in the city of Darat al-Izza, in support of the Turkey-led Saif al-Furat operation against the Syrian Democratic Forces in Afrin. Around 2500 people called for the acceleration of the operation and showed their support for the Free Syrian Army and Turkish Armed Forces. 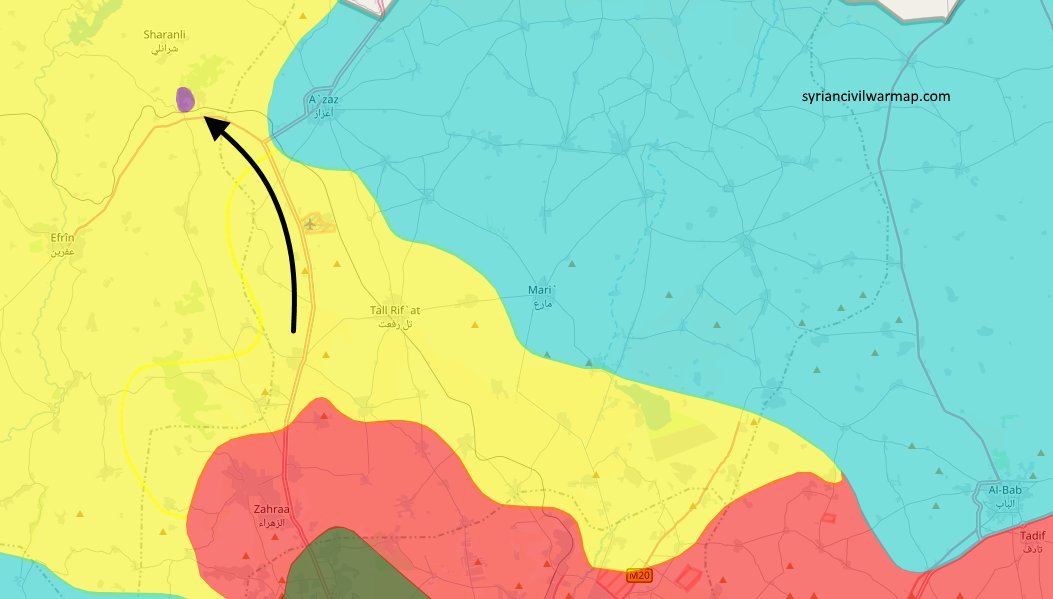 Situation in the northern Aleppo and in the eastern Afrin. (Purple dot on the map is the Russian base in Kafr Janna village). Source: Syrian Civil War Map

Prominent Islamic State’s fighter from Germany, Denis Cuspert (also known as Abu Talha al-Almani and Deso Dogg) was killed on the 17th of January during the clashes with the Syrian Democratic Forces in the city of Gharanij in the eastern Deir al-Zour.

Afghan National Security Forces killed seven, wounded nine and arrested one element of the Islamic Emirate of Afghanistan, as well as destroyed an ammunition cache in Alingar district.

Islamic State assassinated an element of the National Directorate of Security in Surkh Rod district.

Four elements of the Afghan Local Police were killed and another two wounded in the clashes with the Islamic Emirate of Afghanistan in Qarabagh district.

Between the 12th and the 18th of January 2018 CJTF-OIR has conducted 59 strikes in Syria. CJTF-OIR‘s main focus in Syria at the moment is Deir al-Zour-Albu Kamal region where they did 59 strikes supporting SDF‘s operations against IS destroying four indirect fire weapons, 11 fighting positions, four IS supply routes, two IS motorcycles, four weapons caches, seven IS logistics centers, two pieces of IS engineering equipment, two IS vehicles, three VBIED factories, three UAVs, an explosive hazard, an indirect fire position, four IS headquarters, six IS lines of communication, a heavy machine gun, an IS-held building, and a tunnel.

Islamic State killed an element of the Egyptian militia and seized a vehicle in the attack south of the city of Rafah.

Islamic State launched an attack against the Nigerian Army, reportedly killing around 25 soldiers in the city of Tamour, near Lake Chad.

Islamic State reportedly assassinated two individuals accused of spying for the government of Pakistan in the city of Quetta, provincial capital of Balochistan.