Hello and welcome to the 300th installment of the SWD.

Unknown individuals targeted Turkish Army’s convoy passing through Zarzita village with an RPG and destroyed an armored vehicle. The convoy entered Syria through Kafr Lusin and was on its way towards Darat Izza when it came under attack. After the attack, Turkish forces found and dismantled nine improvised explosive device, which were planted on the road where the convoy was supposed to pass.

Syrian Salvation Government, which operates in Hayat Tahrir al-Sham-held areas, released a statement stating that the last night’s explosion in the city of Idlib wasn’t a VBIED, but rather a Russian missile.

Islamic State’s Amaq Agency reported destruction of the Syrian Democratic Forces’ vehicle with an anti-tank guided missile, east of the city of Hajin. 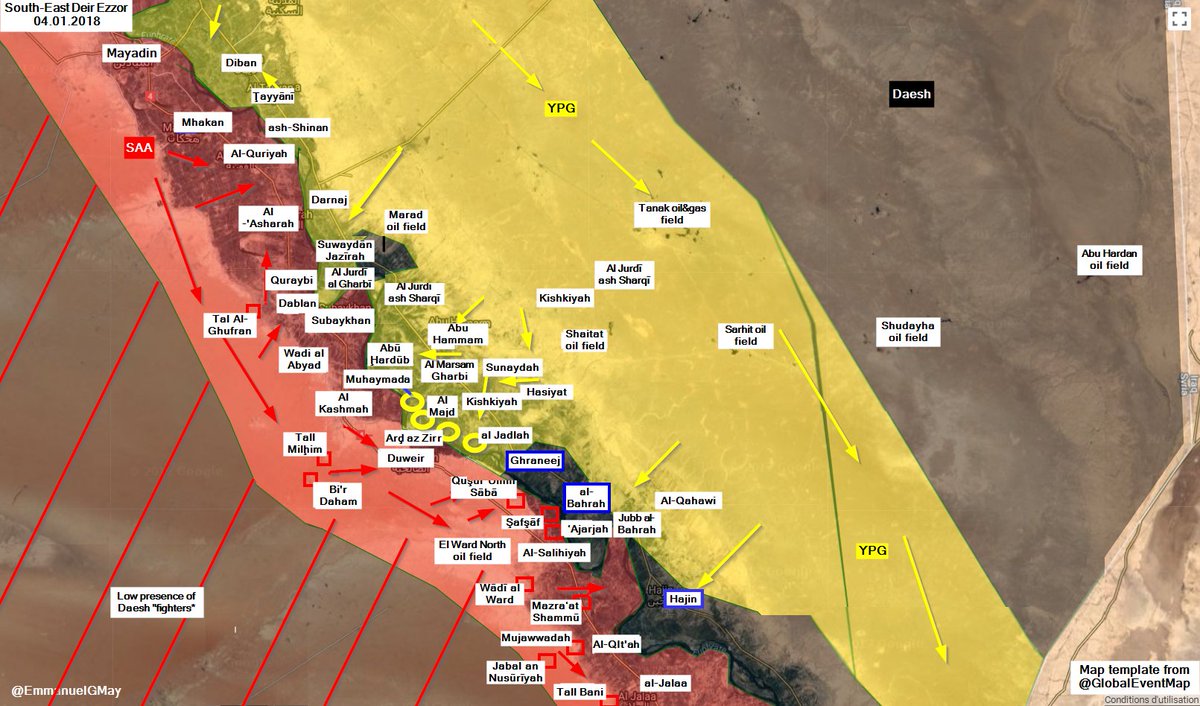 Syrian Arab Army clashed with the Ahrar al-Sham-led rebels in the city of Harasta, with reports about the former making limited advances against the latter in the locality. The clashes were focused on Al-Ajami and Al-Hadayiq neighborhoods of Harasta.

Ahrar al-Sham’s spokesman in the East Ghouta, Munthir Fares denied yesterday’s reports about the Syrian Arab Army breaking the siege of the SAA-held areas of the ‘Army Armored Vehicle Base’ in Harasta. According to Fares, the news about the siege being broken are false victories being promoted in order to raise the moral of the troops on the front lines. Similarly, reports surfaced about Ahrar al-Sham-led rebels still being in complete control of Al-Ajami neighborhood and Al-Basher hospital. The hospital was reportedly recaptured by the Syrian Arab Army on the 5th of January.

Afghan National Security Forces conducted operations against the Islamic Emirate of Afghanistan (Taliban) in Imam Sahib and Ali Abad districts, killing 14 and wounding five fighters of the group, as well as destroying a vehicle, a motorcycle, and a weapons depot.

Afghan Local Police’s element was wounded by the Islamic Emirate of Afghanistan in the city of Mihtarlam.

Afghan National Security Forces killed one and wounded one fighter of the Islamic Emirate of Afghanistan in Khaja Sahib Posh district.

Two elements of the Afghan National Police surrendered to the Islamic Emirate of Afghanistan with their weapons in Khoshamand district.

Afghan National Security Forces conducted large-scale operations against the Islamic Emirate of Afghanistan in the province, killing 27 and wounding 17 fighters of the group. Furthermore, three vehicles and a weapons depot were destroyed in the operations.