Hello and welcome to the 296th installment of the SWD.

Security Forces in TFSA-held Jarabulus started a campaign against the Islamic State’s elements present in TFSA-held areas north of Aleppo.

Syrian Interim Government’s newly-formed Al-Jaysh al-Watani al-Souri (Syrian National Army) operating in TFSA-held northern Aleppo, announced readiness to participate in the battles against the Syrian Arab Army in Idlib and Hama governorates. The announcement was transmitted by the deputy chief of staff of the Syrian National Army, Colonel Haytham al-Afisi.

Syrian Arab Army captured Rasm al-Abd, Al-Fuhayl, Mushayrifah Shamaliyah, Luwaybidah, Al-Haqiyah, Umm al-Rajim, Qasr al-Abyad, and Rabiat Musa from the rebel factions in the southern Idlib. Target of this SAA‘s advances appears to be the village of Sinjar, with a greater goal of reaching Abu al-Duhur airbase. Reports suggest that the rebel forces withdrew from Sheikh Baraka area, which is around 2 kilometers (1 mile) away from Sinjar. 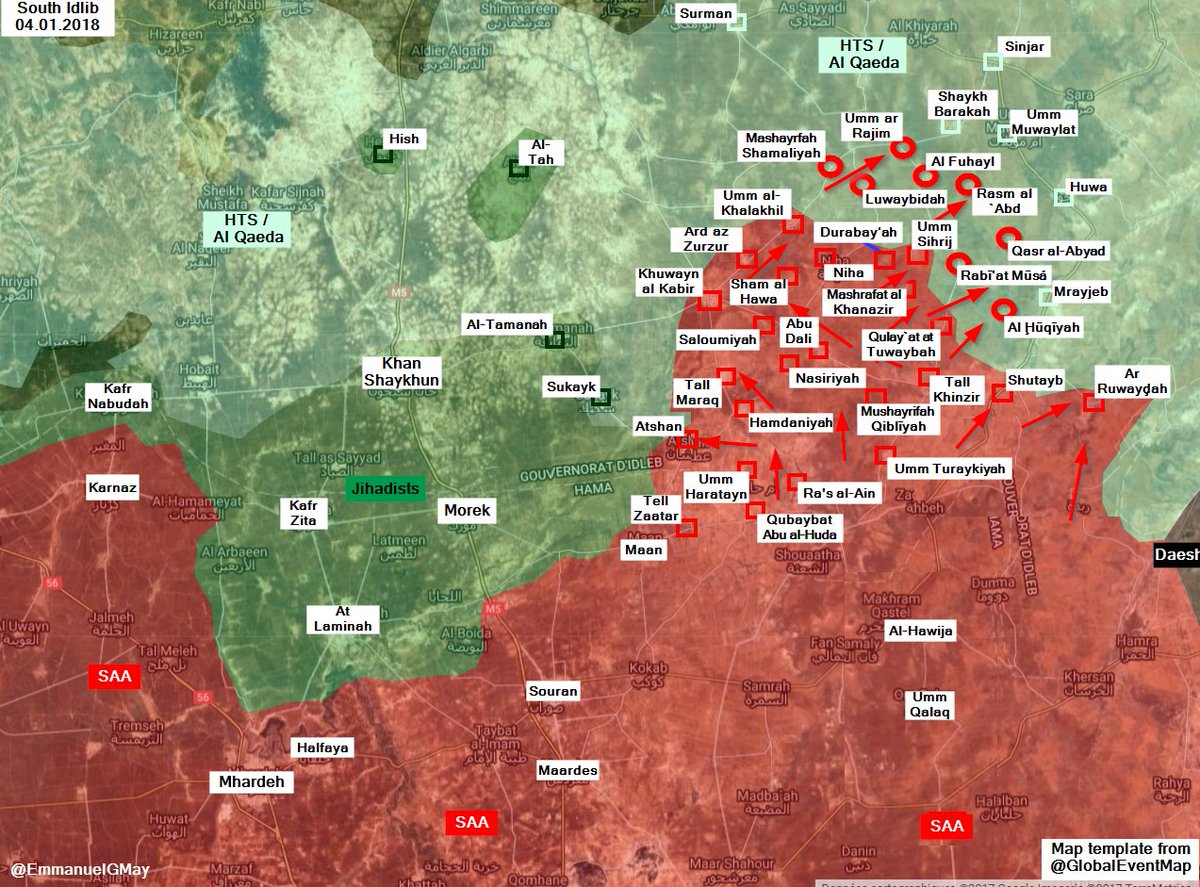 Syrian Security Forces dismantled a left over Islamic State’s VBIED east of Al-Talila reservoir, in the vicinity of Palmyra. The VBIED was reportedly loaded with around 500 kilograms (1100 pounds) of explosive materials.

Islamic State’s Amaq Agency reported that Islamic State’s sniper killed an element of the Syrian Democratic Forces and wounded another one in the village of Al-Kushkiyah. 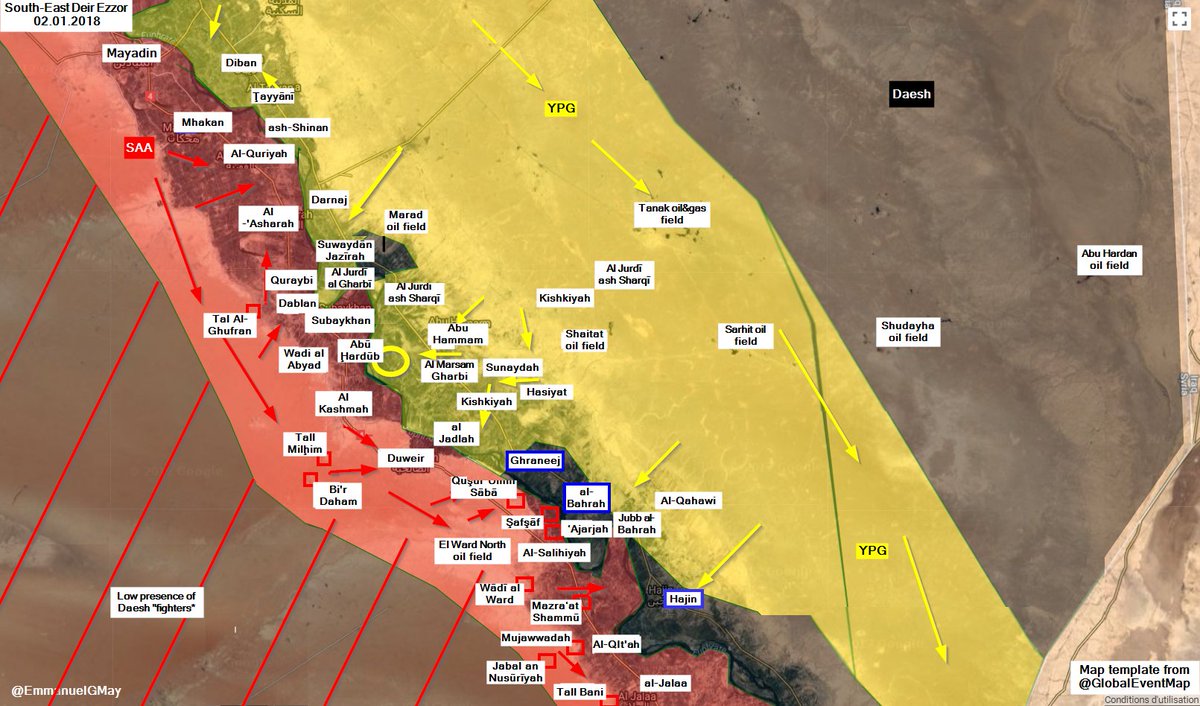 Syrian Arab Army’s artillery shelled Harasta, Mesraba, Douma, and Ain Terma in the East Ghouta. According to the Syrian Civil Defense (The White Helmets), a civilian was killed and three wounded by the shelling of Harasta, while the shelling of Mesraba reportedly wounded four civilians.

Rebel shelling of the city of Damascus and nearby areas killed two and wounded 24 civilians. One civilian was killed and two wounded by the shelling of Harasta, while the shelling of Al-Amara neighborhood reportedly resulted in killing of one and injury of 22 civilians.

Syrian Arab Army launched an attack against the Ahrar al-Sham-led rebels in Harasta, aimed at breaking the siege of SAA‘s elements besieged in ‘Army Armored Vehicle Base’ and Technical Institute. According to the reports, Syrian Arab Army made limited advances in the city of Harasta, capturing several buildings in the locality, including the Abu Bakr mosque.

Faylaq al-Rahman officially announced the death of 16 of its elements due to the clashes with the Syrian Arab Army on ‘Army Armored Vehicle Base’ front.

Explosions took place and fire erupted at the positions of the Syrian Arab Army’s artillery battalion on Jabal Qasioun in Damascus. The initial explosion allegedly occurred in one of the ammunition caches in the battalion, however, the cause of the explosion is currently unknown.

Islamic State-linked Jaysh Khalid ibn al-Walid raided Free Syrian Army’s positions near Al-Sheikh Saed in the southwestern Daraa. Islamic State’s Amaq Agency stated that three elements of the Free Syrian Army were killed and one captured in the raid, as well as one machine gun destroyed.

Afghan National Security Forces killed five and wounded nine fighters of the Islamic Emirate of Afghanistan in the province.

Explosion took place in Benayi neighborhood of the 9th police district in the city of Kabul. Initial reports said that around ten people were killed in the explosion. Islamic State’s Amaq Agency claimed responsibility for the explosion by saying that an SVBIED killed and wounded 80 elements of the Afghan National Police and National Directorate of Security in Benayi neighborhood.

Afghan National Security Forces arrested three fighters of the Islamic Emirate of Afghanistan and another three individuals suspected of belonging to the group in the province.

Afghan National Security Forces raided Islamic Emirate of Afghanistan’s positions in Mohammad Agha district, however, the latter was able to repel the attack. According to the Islamic Emirate of Afghanistan, 18 elements of the Afghan National Security Forces were killed and a dozen more wounded, as well as two vehicles destroyed.

Elements of the Afghan National Security Forces were ambushed by the Islamic Emirate of Afghanistan and then targeted by an improvised explosive device in Mir Haidar area, which resulted in killing of seven and injury of two ANSF elements.

Afghan National Security Forces conducted operations against the Islamic Emirate of Afghanistan in the province, killing 12 and wounding 14 fighters of the group. Furthermore, five vehicles and nine improvised explosive devices were destroyed.

Afghan National Security Forces killed six and wounded four fighters of the Islamic Emirate of Afghanistan in the province, as well as destroyed a fighting position and a vehicle.

NATO-led Operation Resolute Support released a report about Afghanistan’s 7th Special Operations Kandak conducting a night raid that freed five civilians from the Islamic Emirate of Afghanistan’s “Red Unit” compound in Nahr-e Saraj district on the 1st of January. According to the report, Afghan forces killed seven elements of the “Red Unit” and captured four, as well as destroyed the amount of hashish worth $3.4 million. Afghan forces also seized several improvised explosive devices and ammunition from the raid.