Hello and welcome to the 290th installment of the SWD.

Correspondent of Sama TV, Abdul Ghani Jarouk was wounded and his cameraman Kareem Qabishou killed by the rebels in the border area between Idlib and Hama governorates, as they were covering Syrian Arab Army’s operations against the rebel factions.

Russian Air Force conducted over a dozen of air raids over the villages of Al-Jataniyah, Zaghbir, Jib Sukkar, and Al-Janaina in the eastern Hama. 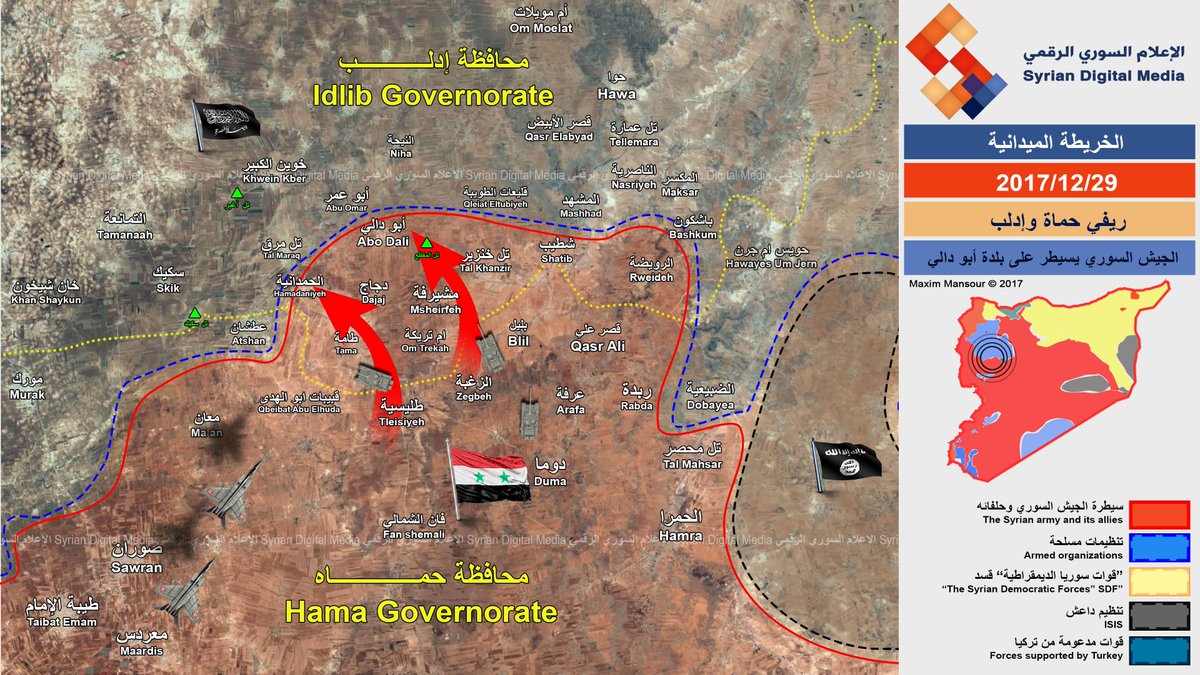 Islamic State’s Amaq Agency released three statements regarding the area near Al-Bahra village, northwest of Hajin. According to the agency, Islamic State launched a counterattack near the village and killed three fighters of the Syrian Democratic Forces. Two other statements reported destruction of a Humvee and a bulldozer and targeting of SDF‘s elements near the village with anti-tank guided missiles. 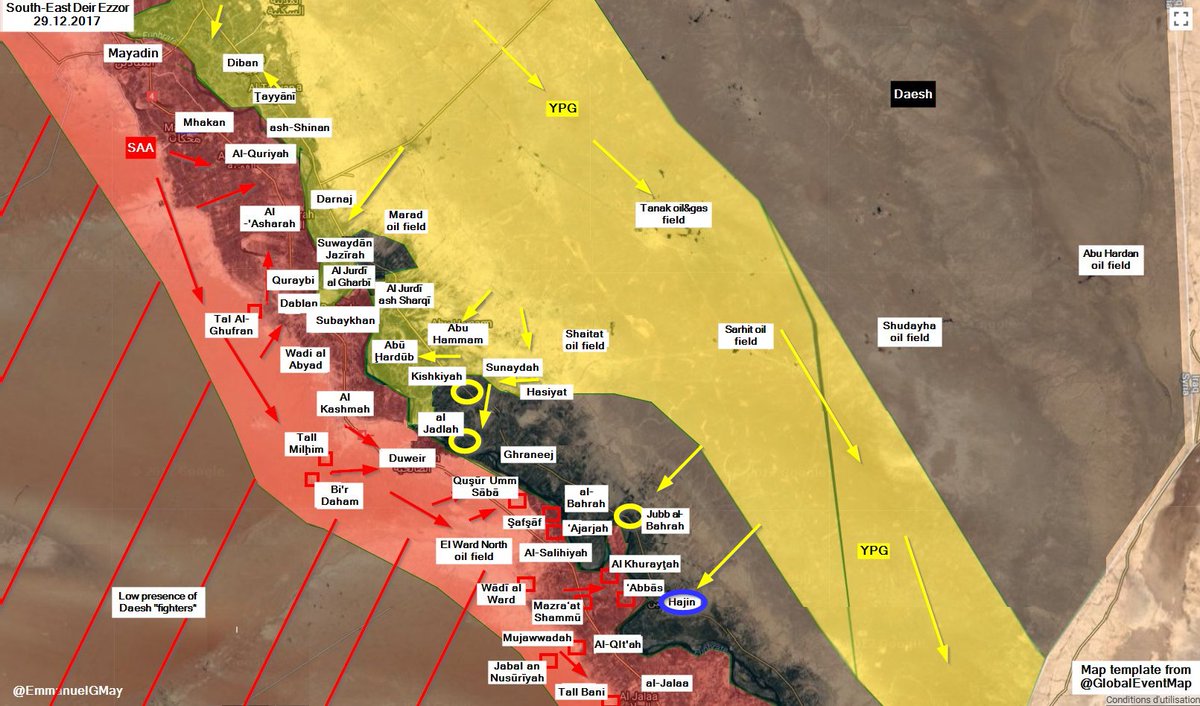 Ahrar al-Sham launched a new attack against the Syrian Arab Army in the ‘Army Armored Vehicle Base’ in Harasta. Before Ahrar al-Sham’s attack started, Abu Dujana al-Jazrawi conducted a SVBIED attack against the SAA‘s positions in Al-Ajami neighborhood of Harasta, near the ‘Army Armored Vehicle Base’. Al-Jazrawi was reported as Hayat Tahrir al-Sham’s commander from Saudi Arabia, even though his allegiance to HTS can not be confirmed for now. Syrian Arab Army did manage to repel Ahrar al-Sham’s attack.

Islamic State’s sleeper cells in the city of Hawija reportedly took control of a part of the city during the night. Iraqi Security Forces reportedly recaptured all of the areas that the sleeper cells managed to capture.

Islamic State’s improvised explosive device destroyed Al-Hashd al-Shaabi vehicle and killed an element of the group, as well as wounded two other elements near Al-Abbasi in Hawija district.

Three Islamic State’s improvised explosive devices northeast of Muqdadiya killed eight people, including the mayor of Al-Bazul village, according to the Amaq Agency.

Islamic Emirate of Afghanistan (Taliban) ambushed a group of Afghan National Army’s soldiers in Chimtal district, killing three and wounding one soldier, as well as destroying a tank.

Afghan National Security Forces operations against the Islamic Emirate of Afghanistan in Alingar district, resulted in killing of nine and injury of six elements of the group.

Afghan National Security Forces killed one and wounded three fighters of the Islamic Emirate of Afghanistan in Qarabagh district.

Afghan National Security Forces killed ten and wounded four fighters of the Islamic Emirate of Afghanistan in the province, as well as destroyed several weapons depots and ammunition caches. Among the ten killed IEA fighters are two fighters from Pakistan.

Afghan National Security Forces killed two fighters of the Islamic Emirate of Afghanistan and destroyed one vehicle in Maywand district.

Between the 22nd and the 28th of December 2017 CJTF-OIR has conducted 38 strikes in Syria. CJTF-OIR‘s main focus in Syria at the moment is Deir al-Zour-Albu Kamal region where they did 37 strikes supporting SDF‘s operations against IS destroying three heavy machine guns, three IS line of communications, a UAV, two explosive hazards, a heavy weapon, an IS headquarters, two IS logistics centers, a fighting position, seven IS vehicles, an IS-held building and a staging area.

Other area where one strike occurred is Al-Shadaddi destroying a UAV. Full report on CJTF-OIR strikes conducted in both Syria & Iraq can be found here.