Hello and welcome to the 289th installment of the SWD.

Hayat Tahrir al-Sham’s Ibaa News Agency claimed that more than 60 Syrian Arab Army’s elements were killed during the clashes in the northern Hama. The agency quoted Abu al-Hassan Farouq, military commander in the Northern Hama operations room, who said that the rebels ambushed a group of SAA‘s soldiers that attempted to infiltrate an area near Tell al-Maqtae. Abu al-Hassan also said that an improvised explosive device destroyed SAA‘s vehicle carrying elements in the village of Al-Mushayrifah. 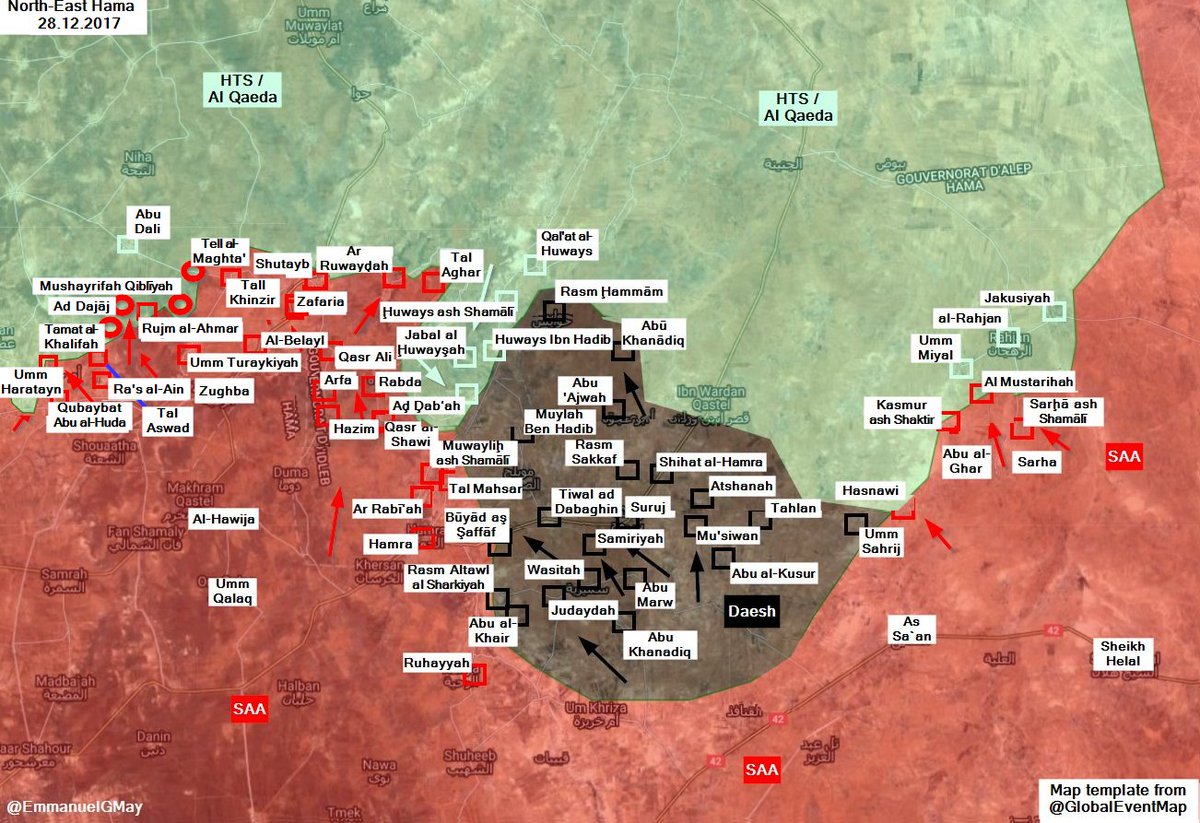 Approximate situation in the eastern Deir al-Zour, HD version of this map can be found here. Source: Qasioun News Agency

Iraqi Security Forces backed by the Iraqi Federal Police’s 4th Division arrested an Islamic State’s fighter, who fled from Mosul and was hiding in Al-Doura neighborhood of Al-Rashid district

Islamic Emirate of Afghanistan’s sniper killed an element of the Afghan Local Police in Baghlan-e-Markazi district.

Afghan National Security Forces killed one and wounded two fighters of the Islamic State in the province.

Islamic State conducted a suicide attack on Tebyan cultural center in Kabul, killing 41 and wounding at least 80 civilians. Islamic State’s Amaq Agency claimed responsibility for the attack by saying that the attack targeted “Shiite” and killed and wounded 220 individuals.

Islamic Emirate of Afghanistan attacked a group of Afghan National Police’s elements in the city of Khost, killing two policemen.

Afghan National Security Forces’ attack in Alisher directorate was repelled by the Islamic Emirate of Afghanistan.

Afghan National Security Forces conducted operations against the Islamic Emirate of Afghanistan in Qarabagh district, killing seven and wounding eight fighters of the group, as well as destroying a vehicle.

Islamic Emirate of Afghanistan raided Afghan National Army’s checkpoint in the city of Ghazni, which resulted in clashes between the two for several hours. Islamic Emirate of Afghanistan managed to capture the checkpoint and kill eight soldiers in the proces, as well as injure over a dozen of soldiers. IEA seized six assault rifles, two PK machine guns, an RPG, a grenade and ammunition. IEA then engaged Afghan National Army’s reinforcements, reportedly killing six soldiers and destroying two tanks with RPGs. IEA reported death of one of its fighters due to the clashes in Ghazni.

Islamic Emirate of Afghanistan assassinated Baz Gul, member of the provincial council in Muqur district. Similarly, an element of the Afghan Local Police was assassinated in the same district.

Islamic Emirate of Afghanistan’s sniper killed an element of the Afghan National Police in the city of Ghazni.