Hello and welcome to the 288th installment of the SWD.

Syrian Arab Army captured Umm Haratayn and Tell Tallah, as well as confirmed the capture of Ras al-Ayn and Qubaybat Abu al-Huda from the rebel forces on Atshan front in the northern Hama. Ahrar al-Sham’s commander Ibrahim al-Diab (Abu Khaled) was killed in the clashes for Umm Haratayn.

Hayat Tahrir al-Sham clashed with a group of fighters led by Munir Raadoun (Abu Dabak), formerly a part of the Free Syrian Army’s Jaysh al-Nasr in Qalaat al-Madiq. Jaysh al-Nasr released a statement announcing separation from Abu Dabak, who held position of a commander of the special task battalion in the group. Hayat Tahrir al-Sham attacked Abu Dabak and his fighters, after reports circulated about Abu Dabak’s group smuggling narcotic pills from and to Al-Suqaylabiyah. Abu Dabak is also accused of having links to the Syrian Arab Army and coordinating with it. Hayat Tahrir al-Sham reported that it arrested several individuals linked to Abu Dabak in Qalaat al-Madiq and Al-Suqaylabiyah over the past few days. The clashes between the two sides reportedly stopped after Ahrar al-Sham intervened and received control of Abu Dabak’s positions in the locality.

Approximate situation in the northern Hama, HD version of this map can be found here. Source: Qasioun News Agency

Islamic State reportedly killed an element of the Syrian Democratic Forces in the village of Hawi Hamam, according to the Amaq Agency. 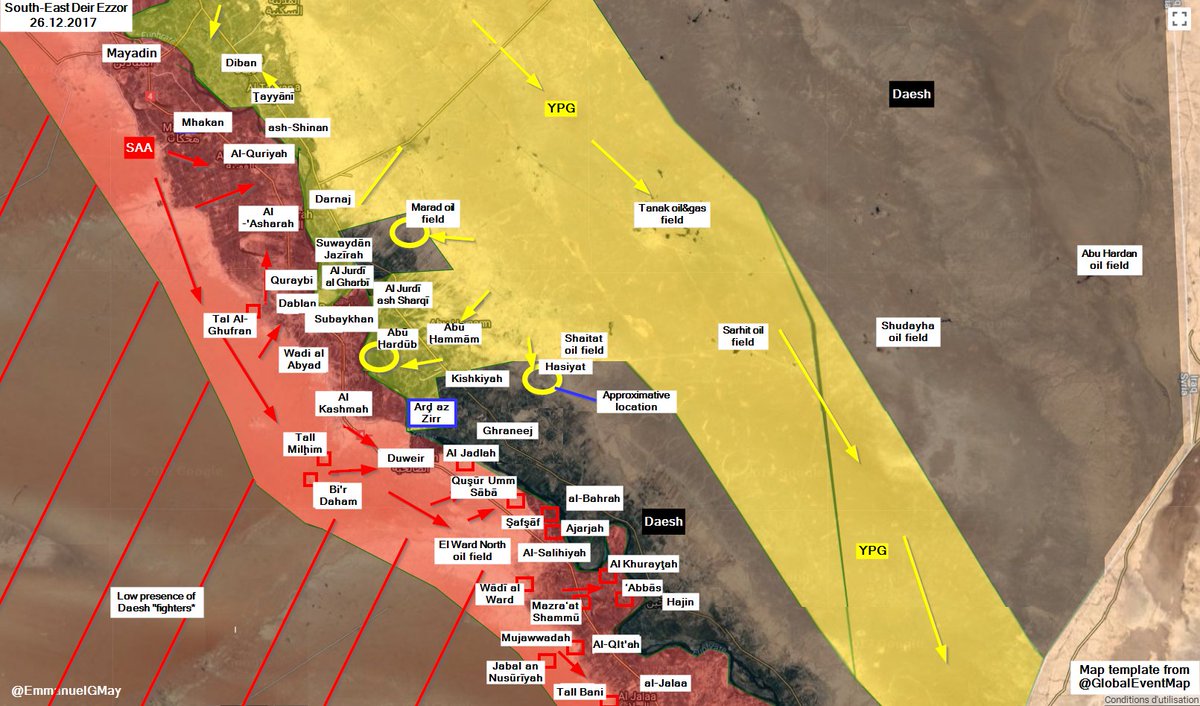 Syrian Arab Army and Jaysh al-Islam reached an agreement regarding the evacuation of 29 individuals from the East Ghouta, in exchange for the release of 29 prisoners. Among the 29 prisoners that Jaysh al-Islam will release are also workers captured by Hayat Tahrir al-Sham in Adra.

Syrian Arab Army entered Mughr al-Meer in Beit Jinn pocket after rebel forces withdrew from it, as a part of the reconciliation/evacuation agreement. Several buses already arrived in Sasa, southwest of Damascus, to evacuate Hayat Tahrir al-Sham’s fighters and their families from the pocket to Idlib.

Iraqi Security Forces conducted operations in Al-Eahd al-Jadid area, south of Baghdad. Security forces discovered an improvised explosive device, four various mortar shells, an ATGM launcher, and weapons and ammunition inside one of the houses in the area. Furthermore, several wanted individuals were arrested during the operations.

Five Afghan Local Police’s elements defected to the Islamic Emirate of Afghanistan in Yaka Toth area of Pashtun Kot district, handing over a checkpoint and three assault rifles to IEA.

Afghan National Security Forces reportedly withdrew from two checkpoints in Do Abo area of Chilgazy. The withdrawal occurred allegedly out of fear of Islamic Emirate of Afghanistan’s attacks on the checkpoints.

Islamic Emirate of Afghanistan and Afghan National Army clashed for several hours in Jangle area of Qaramqol district. The clashes reportedly resulted in destruction of ANA‘s tank and killing of five and injury of three soldiers.

Afghan National Security Forces conducted large operations against the Islamic State in Achin district, killing 50 fighters of the group and destroying a base and three ammunition caches, according to the Afghan Ministry of Defense.

Afghan National Security Forces’ operations against the Islamic Emirate of Afghanistan in Khogyani district killed one fighter of the group and destroyed eight motorcycles. Furthermore, four IEA fighters were arrested during the operations.

Islamic Emirate of Afghanistan’s improvised explosive device targeted the vicinity of the Afghan National Police’s checkpoint in the city of Khost, killing one policeman.

Afghan National Security Forces killed two and wounded one fighter of the Islamic Emirate of Afghanistan in Chora district.

Afghan National Security Forces’ operations against the Islamic Emirate of Afghanistan in Marjah and Nahri Saraj districts killed 20 and wounded 20 fighters of the group. Furthermore, two IEA fighters were arrested and three vehicles and three motorcycles destroyed during the operations.

Islamic Emirate of Afghanistan conducted a suicide attack against the Afghan National Army in the city of Lashkargah, capital of Helmand Province. The suicide attack targeted military installations in the city and reportedly caused a number of casualties among the army’s ranks.

Islamic State’s Amaq Agency reported an assassination of a “Shiite” in the city of Quetta, provincial capital of Balochistan.