Hello and welcome to the 281st installment of the SWD.

Syrian Interim Government’s Minister of Health, Firas al-Jundi stated that Turkey will not recognize Syrian Salvation Government, which operates in Hayat Tahrir al-Sham-held areas of Idlib governorate. Al-Jundi’s statement comes after a Turkish delegation met with the Prime Minister of the Syrian Salvation Government, Mohammed Al-Sheikh in Idlib. The Turkish delegation consisted of the head of the Turkish Religious Endowment, head of the Directorate of Religious Affairs and clerics from Hatay, Kirikhan and Antakya. Turkish government reassured Al-Jundi that they will not recognize any government that is not part of the National Coalition for Syrian Revolutionary and Opposition Forces. According to Al-Jundi, Syrian Interim Government will continue to operate in Idlib governorate, also finding safe places to reopen offices and headquarters closed yesterday by Hayat Tahrir al-Sham. 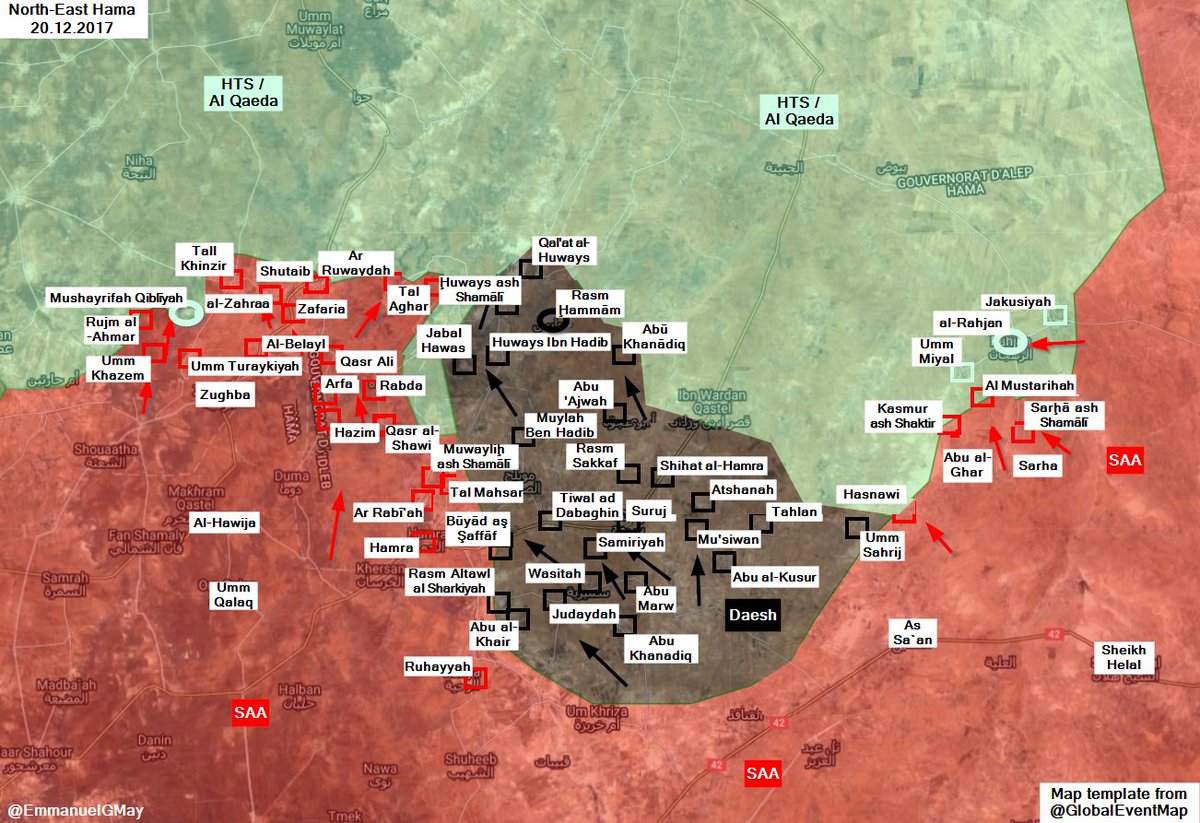 Islamic State’s sniper reportedly killed an element of the Syrian Democratic Forces and wounded another one north of Abu Hammam village, according to the Amaq Agency.

Syrian Arab Army’s artillery shelled Harasta, Ain Terma, Madyara, Douma and Al-Nashabiyah in the East Ghouta. The shelling of Harasta seriously wounded a civilian, who later died in a hospital.

Rebel “Daraa Martyrs Documentation Office” reported death of a Hayat Tahrir al-Sham’s fighter, due to clashes with the Syrian Arab Army at the outskirts of Mughr al-Meer.

Rebel “Daraa Martyrs Documentation Office” reported death of a civilian by the Jordanian Security Forces, as he tried to cross into Jordan from Tell Shihab.

Afghan National Security Forces killed an element of the Islamic Emirate of Afghanistan in Saydabad district.

Afghan National Security Forces’ operations against the Islamic Emirate of Afghanistan in the province resulted in the killing of six fighters of the group, destruction of two vehicles and several weapons depots and ammunition caches.

Afghan National Security Forces conducted large-scale operations against the Islamic Emirate of Afghanistan, killing 18 and wounding five fighters of the group. Furthermore, the operations resulted in destruction of nine vehicles.

Afghan National Security Forces killed ten and wounded seven fighters of the Islamic Emirate of Afghanistan in the province.

Islamic State’s sniper killed an element of the Egyptian Army at Abu Attiya checkpoint, south of Al-Sheikh Zuwaid in the North Sinai Governorate.

Islamic State killed an element of the Somali National Army and wounded several others at a checkpoint in Afgooye, Lower Shebelle province.