Hello and welcome to the 278th installment of the SWD.

Abu Amara Special Task Brigade claimed responsibility for the assassination of Mohammed Farah, son of Hussein Farah, member of the People’s Council of Syria and the National Reconciliation Committee. However, several sources reported that Mohammed Farah’s death was an incident, which occurred as he was cleaning his personal weapon in Al-Sheikh Taha neighborhood of Aleppo.

Free Syrian Army’s Jaysh al-Izza, backed by Jaysh al-Ahrar and Turkestan Islamic Party launched an attack against the Syrian Arab Army and allies on Halfaya front. The rebels’ attack was led by Jaysh al-Izza’s Colonel Mustafa Bakour and resulted in a brief capture of Al-Zilaqiat and Zalin checkpoint. The rebels also captured six elements belonging to the Syrian Arab Army and allies. Syrian Arab Army and National Defense Forces entered Al-Zilaqiat and Zalin checkpoint after the rebels were forced to retreat due to air raids and shelling. Reports suggest that the Russian troops based in a camp south of Halfaya, completely retreated from the area as the rebels made initial advances. 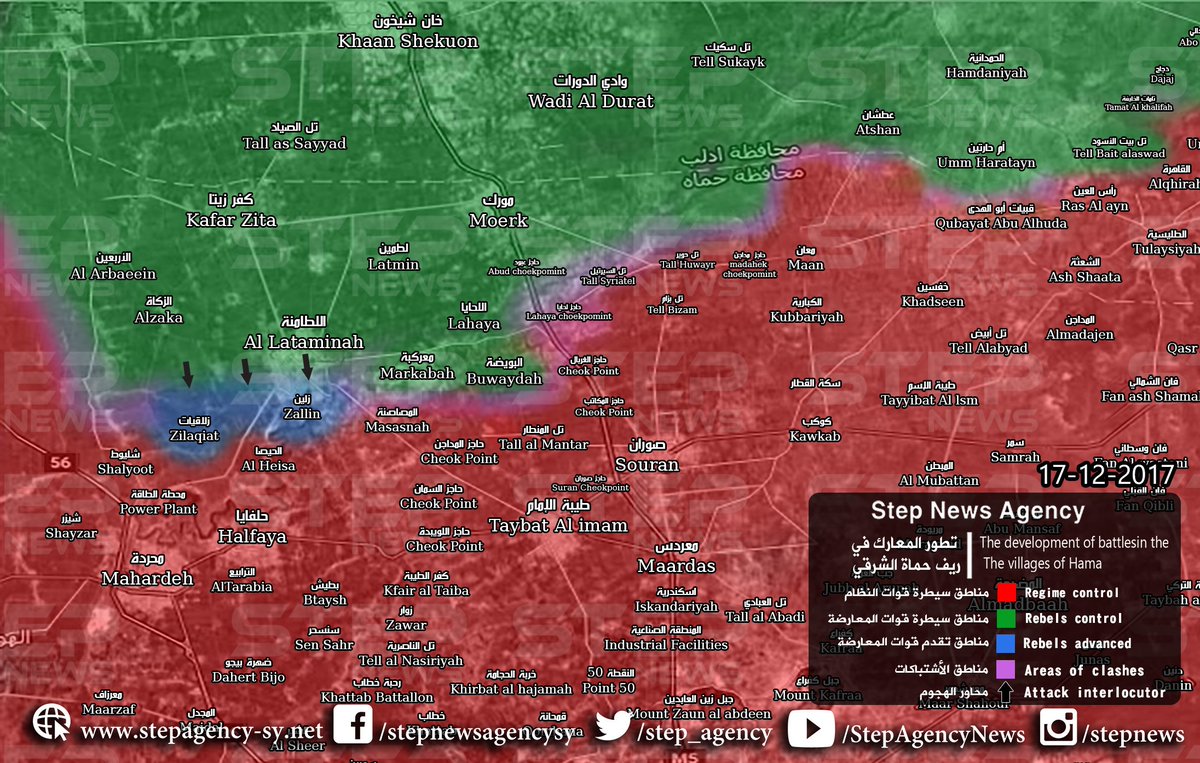 Approximate situation in the northern Hama, before the SAA and allies recaptured Al-Zilaqiat and Zalin checkpoint, HD version of this map can be found here. Source: Step News Agency

Left over Islamic State’s improvised explosive device reportedly killed four and wounded two elements of the Syrian Arab Army and allies in Al-Quriyah. The incident occurred as the elements were inspecting a house in the locality. 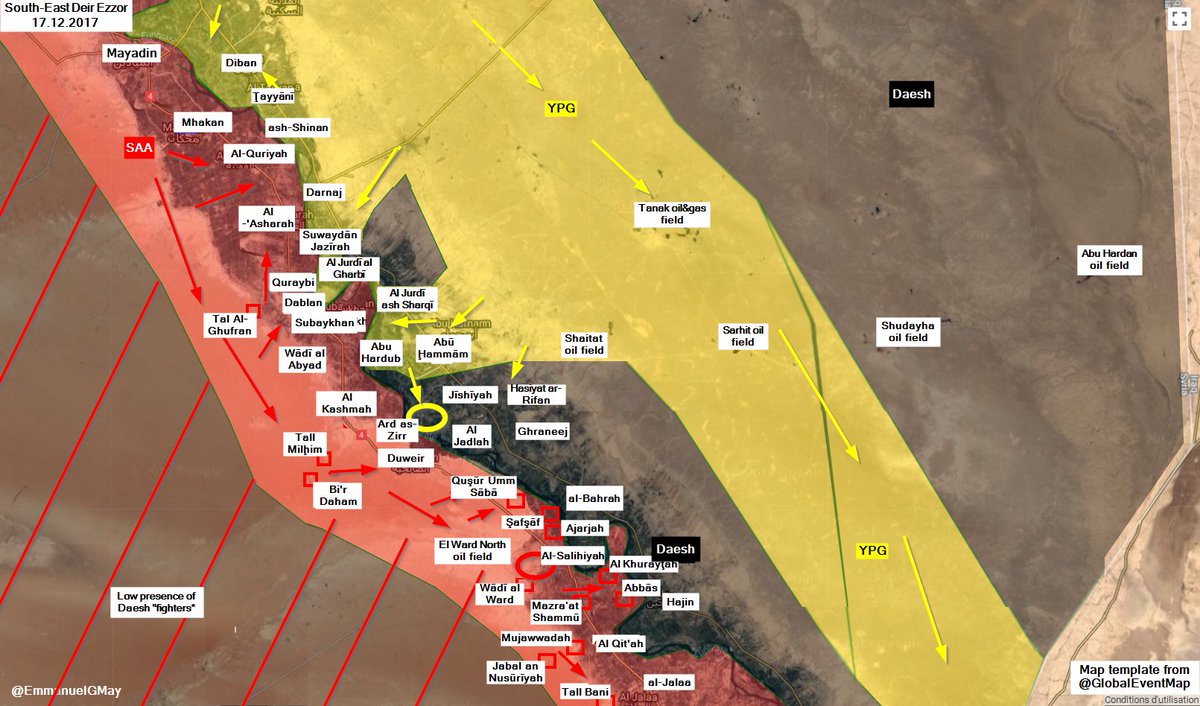 Spokesman of the rebel Jabal al-Sheikh operations room, Abu Rami al-Janani confirmed Syrian Arab Army’s capture of Tell al-Ziyat and Al-Duhur al-Aswad from the rebels in Beit Jinn pocket. Al-Janani stated that the reasons that SAA captured the aforementioned areas are the small number of fighters and a lack of better equipment.

Four Free Syrian Army’s factions; Al-Wiyat Mujahidi Hawran, Al-Wiyat Jaydour Hawran, Al-Liwa al-Awal Maham Khasat Tawirsh, and Liwa Osama ibn Zeid formed a coalition/operations room Thalif Thuwar al-Jaydour in preparations for the Syrian Arab Army and allies’ attack on the “Triangle of Death” area. Commander of Liwa Osama ibn Zeid, Maher Hawish said that the coalition was formed after they witnessed large SAA & allies reinforcements arriving in the “Triangle of Death” area. Hawish also stated that the newly-established coalition consists of a thousand fully armed and trained fighters. Member of the media office of the newly-established Thalif Thuwar al-Jaydour coalition, Abu Qais Nasser said that the main idea for the formation of the coalition was to prepare for the upcoming battle against the SAA & allies. Nasser indirectly confirmed that the new coalition doesn’t have any plans for attacks, but rather it is an attempt for a more effective defense, in case of an attack.

Islamic Emirate of Afghanistan (Taliban) denied casualty numbers released yesterday by the Afghan Ministry of Defense, regarding the clashes in Khaja Sahib Posh and Shirin Tagab districts. Ministry of Defense stated yesterday that Afghan National Security Forces killed 20 and wounded 26 fighters of the Islamic Emirate of Afghanistan in Khaja Sahib Posh and Shirin Tagab districts, as a part of the “Prophet 8” operation. According to the IEA, there were no casualties from the clashes in the aforementioned districts and that the ANSF were unable to make any progress.

Afghan National Army launched another attack against the Islamic Emirate of Afghanistan in Tabor area of Sangjark directorate, as a part of “Alborz 20” operation, aimed at eliminating the group’s presence in the directorate. However, IEA repelled today’s attack in the area, losing two fighters in the process.

Islamic Emirate of Afghanistan ambushed a vehicle of the Afghan National Army’s commander, Sabour Khan in Nuri Khail directorate of Muqur district. The vehicle was destroyed in the ambush, commander Sabour Khan killed and another commander Sobtullah wounded.

SVBIED targeted a convoy of the NATO troops in the province, reportedly killing one and wounding four soldiers.

Islamic State took responsibility for an inghimassi (suicide fighters) attack on a church in the city of Quetta. Two suicide bombers reportedly killed at least nine and wounded more than 50 civilians.