Hello and welcome to the 277th installment of the SWD.

Around 60 people participated in the demonstrations in TFSA-held Jarabulus, marking the 5th death anniversary of the Free Syrian Army’s commander, Colonel Yousef al-Jader (Abu Furat). Abu Furat was killed by the Syrian Arab Army’s shelling of Aleppo Infantry School, north of Aleppo in 2012. Abu Furat was the commander of the Free Syrian Army’s Liwa al-Tahwid. The demonstrators also changed slogans against the President of the Syrian Arab Republic, Bashar al-Assad

Syrian Arab Army captured Tell Khanazir and Al-Zahraa from the rebels in the northern Hama. Several sources also reported SAA‘s capture of Al-Mushayrifah village, however, the locality should be considered as disputed for now, as the Hayat Tahrir al-Sham’s Ibaa News Agency reported that SAA‘s attack on the village was repelled. It appears that the SAA‘s capture of Al-Zahraa reported by pro-SAA sources on the 12th of December was false. 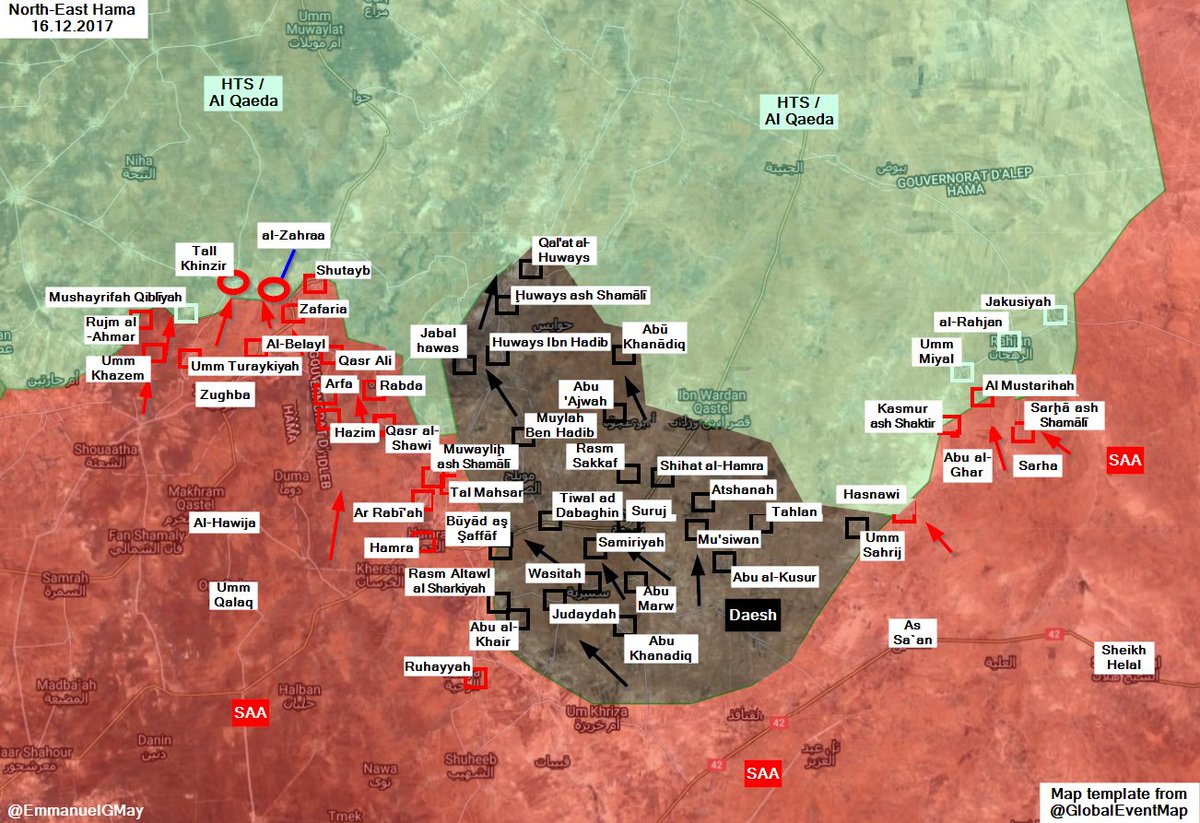 Islamic State’s Amaq Agency claimed that the Islamic State’s sniper killed an element of the Syrian Democratic Forces near the village of Al-Jaradhi.

Syrian Arab Army’s artillery shelled Douma, Harasta, Saqba and Jisreen in the East Ghouta. According to the Syrian Civil Defense (The White Helmets) three civilians were killed and several wounded in the shelling of the aforementioned localities.

Preparations are underway for the evacuation of foreign Hayat Tahrir al-Sham’s fighters and their families from the East Ghouta towards Idlib.

Afghan National Security Forces killed 20 and wounded 26 fighters of the Islamic Emirate of Afghanistan in Khaja Sahib Posh and Shirin Tagab districts, as a part of the “Prophet 8” operation.

Islamic Emirate of Afghanistan captured Afghan National Army’s checkpoint in Ghandab directorate. IEA didn’t state the exact ANA‘s casualties from the encounter, but they reported seizure of an assault rifle, a pistol, a radio transmitter, eight RPG rounds, and 950 bullets for an assault rifle.

Afghan National Army and Islamic Emirate of Afghanistan clashed for the third day in Tuba Qashlaq directorate. IEA claimed that four ANA‘s tanks were destroyed and a large number of soldiers killed and wounded during the past three days.

Afghan National Security Forces started “Alborz 20” operation against the Islamic Emirate of Afghanistan, aimed at eliminating the group’s presence in Sangjark directorate. Over the past few days, ANSF launched several attacks against IEA in the directorate, but the latter was able to repel them all. During the first day of the operation, one IEA fighter was killed and seven wounded.

Islamic Emirate of Afghanistan’s snipers attacked Afghan National Police’s checkpoint in Arzu directorate. The attack resulted in death of one policeman and injury of another one.

Islamic Emirate of Afghanistan attacked Afghan National Army’s elements in Mizan district, killing one soldier and forcing others to retreat from the area.