Hello and welcome to the 276th installment of the SWD.

Abu Amara Special Task Brigade’s improvised explosive device targeted Syrian Arab Army’s checkpoint in Sheehan area of Aleppo city, on the road between Aleppo and Azaz. The brigade’s commander Muhanna Ajafalh confirmed the act taking place, however, he said that there is no information about casualties from the explosion.

Improvised explosive device exploded in Al-Kabira mosque in the city of Taldou. The explosion took place during the Friday prayers and seriously wounded imam of the mosque and four other people.

National Defense Forces seized a vehicle on its way to the rebel Northern Homs pocket, carrying large quantities of cannabis and fenethylline (captagon) pills. The narcotics were transported to the city of Homs, where they are to be destroyed.

Syrian Arab Army captured Tell al-Syriatel north of Balil from Hayat Tahrir al-Sham and Free Syrian Army’s factions. The capture of the hill by the SAA was confirmed by the spokesman of the Free Syrian Army’s Jaysh al-Izza, Lieutenant Mahmoud al-Mahmoud. During the clashes for the hill, Hayat Tahrir al-Sham’s Ibaa News Agency reported destruction of a Syrian Arab Army’s tank. It appears that the SAA‘s capture of Tell Khanazir reported by pro-SAA sources on the 12th of December was false.

Hayat Tahrir al-Sham repelled Islamic State’s attack on Tell Rasm al-Hamam, killing 10 IS’ elements and destroying a technical with an anti-tank guided missile, according to the Ibaa News Agency.

Syrian Democratic Forces took full control of the village of Al-Jaradhi from the Islamic State, after capturing half of it yesterday. The capture of Al-Jaradhi was confirmed by the leader of the SDF‘s Deir al-Zour Military Council, Ahmed al-Khubail. Reports indicate that the SDF‘s next target is the city of Gharanij. 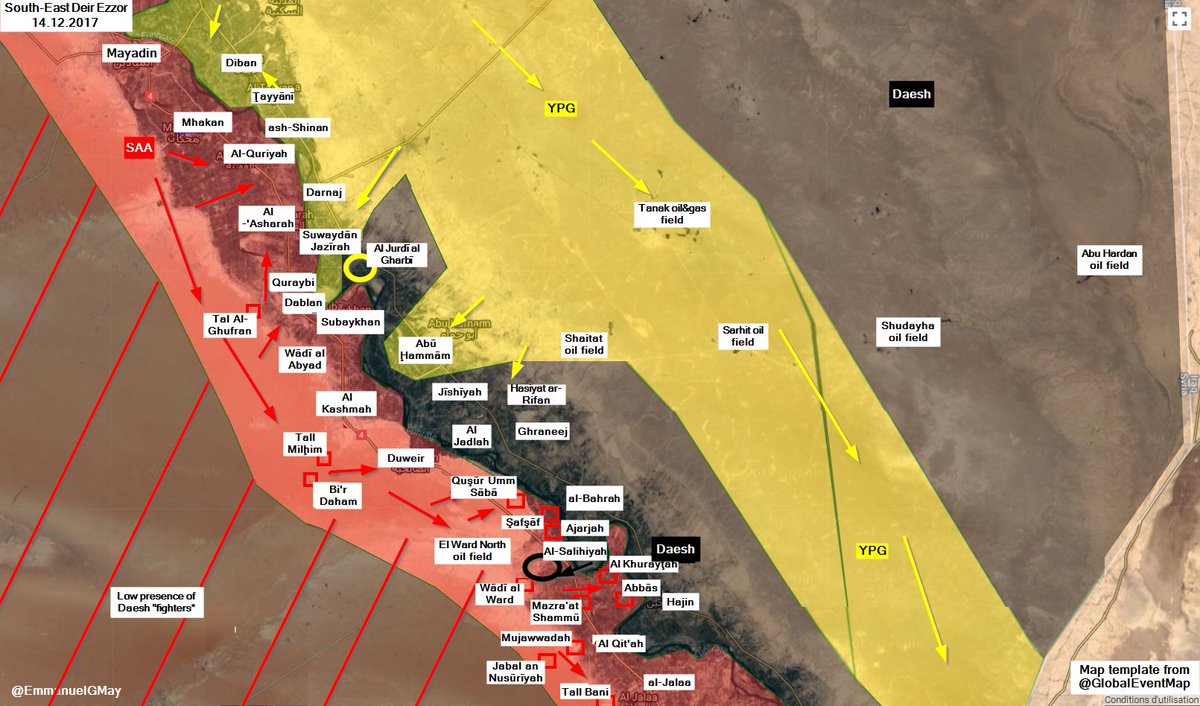 Syrian Arab Army captured Tell al-Maqtoul and Tell Hamza from rebel Jabal al-Sheikh operations room in Beit Jinn pocket. The SAA‘s capture of the aforementioned hills was confirmed by the member of the media office in the rebel operations room, Abu al-Yaman. Al-Yaman also said that four rebel fighters were wounded in the clashes with the SAA.

Syrian Arab Army and Free Syrian Army’s Al-Wiyat al-Omari clashed around the village of Eyeb, after the former shelled latter’s positions in the area. Reports suggest that several SAA‘s soldiers and one fighter of Al-Wiyat al-Omari were wounded in the encounter.

Islamic State’s improvised explosive device wounded an element of the Iraqi Special Operations Forces in Dumiz area of Kirkuk city, according to the Amaq Agency.

Islamic State killed five elements of the Afghan National Army, during the clashes between the two in Bira Khel area of Khogyani district.

Islamic State’s fighters assassinated an element of the Islamic Emirate of Afghanistan in Kot district.

Islamic Emirate of Afghanistan assassinated a high-ranking commander of the Afghan National Army, Zain Allah in Haider Khel directorate of Mandozayi district. The commander was wounded by the IEA fighters and died later in a hospital.

Islamic Emirate of Afghanistan attacked Afghan National Army’s elements in Muqur district, killing one soldier and forcing others to withdraw.

Islamic Emirate of Afghanistan ambushed Afghan National Army’s vehicle in Shah Joy district, fully destroying it and killing everyone on board.

Islamic Emirate of Afghanistan assassinated an influential figure of the National Directorate of Security in the city of Kandahar.

Between the 11th and the 14th of December 2017 CJTF-OIR has conducted 37 strikes in Syria. CJTF-OIR‘s main focus in Syria at the moment is Deir al-Zour-Albu Kamal region where they did 31 strikes supporting SDF‘s operations against IS destroying four heavy weapons, an IS headquarters, 11 IS vehicles and a fighting position.

Other area where six strikes occurred is Al-Tanf destroying three IS vehicles, four cave entrances, a tactical vehicle, a weapons cache and two IS caves. Full report on CJTF-OIR strikes conducted in both Syria & Iraq can be found here.