Hello and welcome to the 272nd installment of the SWD.

Hayat Tahrir al-Sham’s commander of Jabal al-Hoss sector and leader of Jaysh Osama, Mohammad Ramadan al-Hajji known as Abu Amara al-Hossi, was killed by an improvised explosive device in the southern Aleppo countryside. Al-Hossi was one of the most prominent HTS‘ commanders that fought against the Syrian Arab Army and its allies in the southern Aleppo. Al-Hossi also participated in the recent clashes between Hayat Tahrir al-Sham and Ahrar al-Sham. Abu Amara al-Hossi is known for stepping on the Free Syrian Army’s flag at the outskirts of Saraqib.

Syrian Democratic Forces reached an agreement with the Iraqi Army to establish a joint coordination center, in order to ensure the security of the Iraqi-Syrian border.

Islamic State clashed with the Syrian Democratic Forces near the village of Suwaidan and according to the former’s news agency, five SDF‘s fighters were killed in the clashes.

Islamic State’s improvised explosive device killed three fighters of the Syrian Democratic Forces in the vicinity of Hawi Abu Hammam village, according to the Amaq Agency. 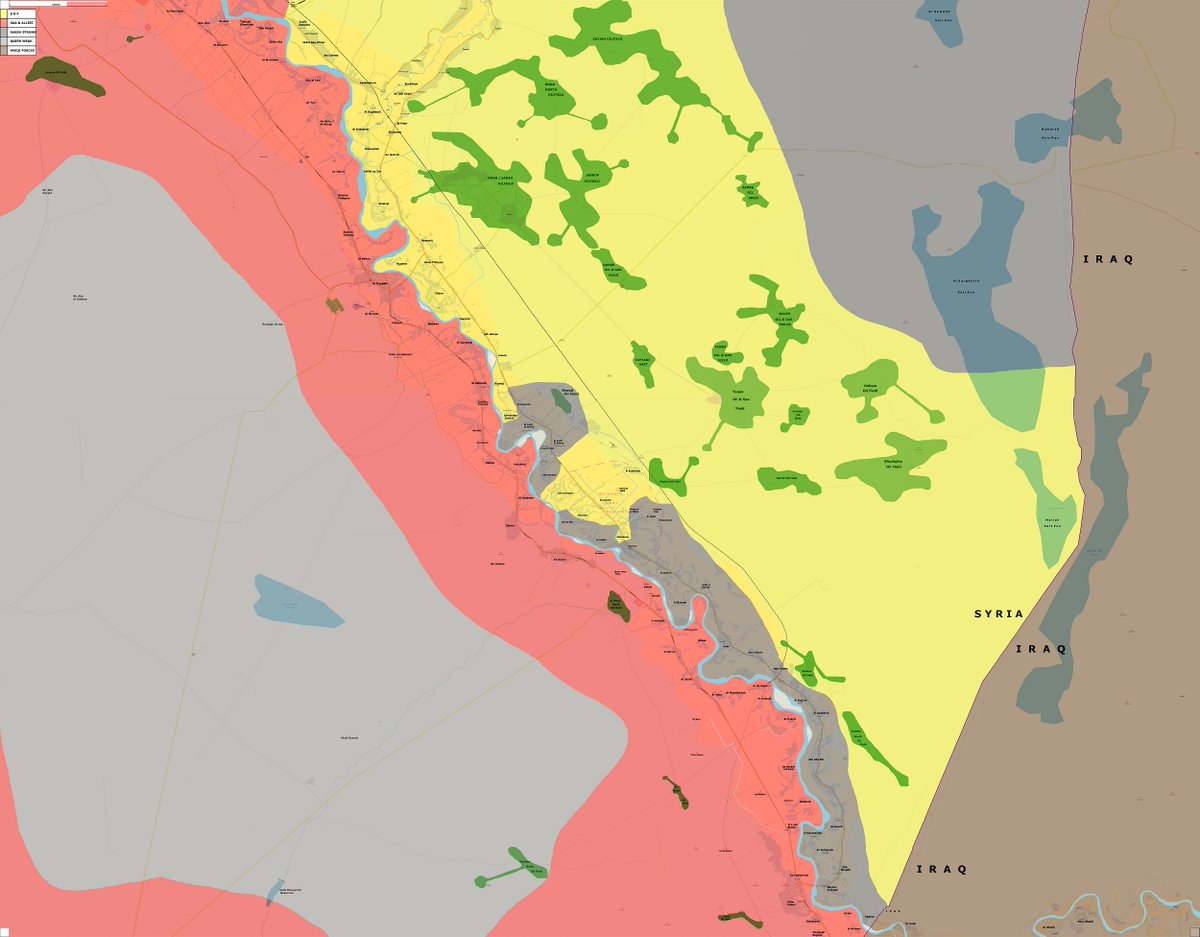 Approximate situation in the eastern Deir al-Zour, HD version of this map can be found here. Source: Lucio Cienfuegos

Syrian Arab Army and rebel Jabal al-Sheikh operations room clashed in Beit Jinn area, as the former tried to advance against the latter in the area. Clashes were concentrated in Mazraat Beit Jinn and Mugh al-Meer area. Member of the information office of the Jabal al-Sheikh operations room, Ziad Salah stated that 15 SAA‘s elements were killed and wounded and a tank destroyed during the clashes.

Engineering battalion of the Free Syrian Army’s Quwa Shabab al-Sunnah (Youth of Sunna Forces) dismantled two improvised explosive devices and detonated four of them on the road between Samj and Tisiyah villages. Director of the Information Office in Quwa Shabab al-Sunnah, Abu Ghazi stated that the improvised explosive devices on the road were planted by the Syrian Arab Army.

Islamic Emirate of Afghanistan (Taliban) claimed responsibility for the yesterday’s assassination of Afghan National Police’s chief of Khogyani district, Habibur Rahman. IEA stated that another commander was wounded by the explosion which killed Rahman, along with three of his bodyguards.

Afghan National Security Forces started large-scale operations against the Islamic State in Khogyani district. Operations started yesterday and have been focused on the villages of Dhaka, Nadafan, and Mirzakhel. So far, ANSF killed nine IS’ fighters and wounded four.

Islamic Emirate of Afghanistan’s inghimasi (suicide fighters) stormed Afghan National Army’s checkpoint in Omna district. Inghimasi killed a soldier and wounded two others during the clashes for the checkpoint, which was then captured by IEA. IEA seized several weapons from the checkpoint.

Islamic Emirate of Afghanistan’s improvised explosive device targeted the vehicle of the head of the Shura Council of Yahyakhel district, Sardar Khan. Khan and his bodyguards were wounded by the explosion.

Islamic Emirate of Afghanistan’s improvised explosive device targeted Afghan National Army’s elements in Khash Rod district. There was no information regarding the casualties from the explosion.

Between the 8th and the 10th of December 2017 CJTF-OIR has conducted 13 strikes in Syria. CJTF-OIR‘s main focus in Syria at the moment is Deir al-Zour-Albu Kamal region where they did 13 strikes supporting SDF‘s operations against IS destroying two tactical vehicles, three fighting positions, a mortar system, an IS headquarters, an IS vehicle and an IS line of communication.