Hello and welcome to the 271st installment of the SWD.

Faylaq al-Sham’s fighter was wounded by an improvised explosive device on the road between Maar Shamshah and Maarat al-Numaan.

Ahrar al-Sham’s snipers conducted operations against Syrian Arab Army’s troops stationed at Al-Samad checkpoint, near the village of Jarjisa. Leader of the Northern Homs Countryside Operations Room, Lieutenant Colonel Talal Mansour stated that Ahrar al-Sham’s snipers killed SAA‘s commander and four soldiers during the operations. According to Mansour, these operations are a response to the SAA‘s shelling and will not be limited only to the Northern Homs pocket.

Syrian Arab Army made significant advances against the rebel forces in the northern Hama. SAA captured Shatib, Al-Hawiyah, Al-Farka, Al-Zafariyah, Umm Turikiyah, Rajm al-Ahmar, Rajm al-Hal, and Tell Boulous. SAA is now at the outskirts of Abu Dali and Al-Mushayrifah villages. Interestingly enough, the aforementioned Al-Zafariyah village was already reported as captured by pro-SAA sources on the 2nd of December. 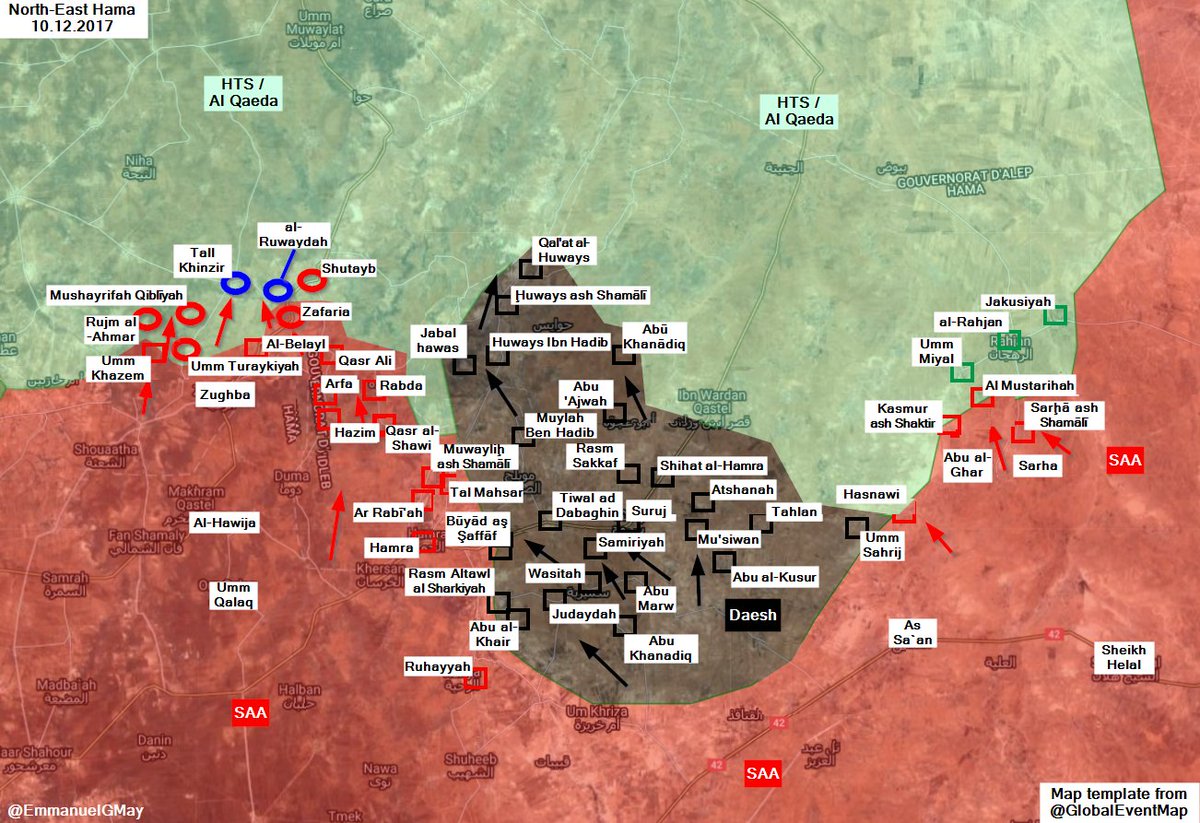 Rebel “Daraa Martyrs Documentation Office” reported death of a Free Syrian Army’s fighter, due to clashes with the Syrian Arab Army in Al-Manashiyah neighborhood of Daraa.

Last night, unknown gunmen tried to kidnap a civilian on the road between Murdok and Al-Suwayda. The civilian was able to escape, but was wounded in the process, and is currently in a hospital in Al-Suwayda.

Afghan National Security forces killed 12 fighters of the Islamic Emirate of Afghanistan and destroyed a vehicle during the clashes in Imam Sahib district.

Islamic Emirate of Afghanistan released first information of their own regarding the clashes in Imam Sahib district, that have been ongoing for few days now. IEA stated that it started to clash with Afghan National Army, backed by US forces in Joy Begm and Gargzu areas. According to IEA, 10 ANA‘s elements were killed, including a commander, Bashir Andrabi. IEA also stated that an armored vehicle was destroyed and 21 attacking elements wounded, including four US soldiers. Three IEA fighters were killed, as the clashes in the aforementioned areas continue.

Afghan National Security Forces found Islamic Emirate of Afghanistan’s hideout during the operations in Bagram district, according to the National Directorate of Security. Security forces seized three rocket launchers, five mortar shells, ten grenade launchers, and 1150 kilograms (2535 pounds) of ammonium nitrate fertilizer, which is used to create improvised explosive devices. National Directorate of Security stated that the seized weapons were supposed to be used to target Bagram airfield and in terrorist attacks in Parwan, Kabul, and Kapisa provinces.

Afghan National Police’s chief of Khogyani district, Habibur Rahman was killed by an improvised explosive device, which targeted his vehicle. The incident took place at the market and so far no one has claimed responsibility for the assassination of the police chief.

Islamic Emirate of Afghanistan ambushed Afghan National Army’s military convoy in Saydabad district. The ambush resulted in destruction of a vehicle and caused several casualties among the army’s ranks.

Improvised explosive device exploded in Khost’s market during a speech of Hezb-e Islami Gulbuddin’s leader, Gulbuddin Hekmatyar. Several thousand members of the party were attending the speech at the nearby Khost’s football stadium. The explosion did not cause any casualties.

Afghan National Security Forces killed a fighter of the Islamic Emirate of Afghanistan and seized a vehicle in Andar district.

Islamic Emirate of Afghanistan captured a checkpoint manned by the Afghan militia in Gelan district. Leader of the militia, Fayadh al-Bari and two of his bodyguards were killed in the IEA attack on the checkpoint.