Hello and welcome to the 270th installment of the SWD.

Fighters of the Free Syrian Army’s Ahl al-Diyar operations room raided Syrian Democratic Forces’ positions in Tal Jajan village, west of Al-Bab. Military Commander of FSA‘s Ahl al-Diyar operations room, Abu Ibrahim stated that six SDF‘s fighters were wounded in the raid and a number of light and medium weapons seized. FSA‘s fighters retreated to their old positions after the raid, in which, one FSA‘s fighter was wounded.

Ahrar al-Sham released a statement about Katibat Saraya al-Fath and Katibat Ansar al-Huda joining their ranks in the southern Hama (Northern Homs pocket). The aforementioned groups are led by Abu Ammar al-Akidi. Ahrar al-Sham’s official in the media office, Fares Abu Abada stated that the groups were a part of Jund Badr: al-Wiyat wa Kataib 313 and shortly a part of the Free Syrian Army’s Jaysh al-Izza. Abu Abada also stated that two groups have around 100 fighters. 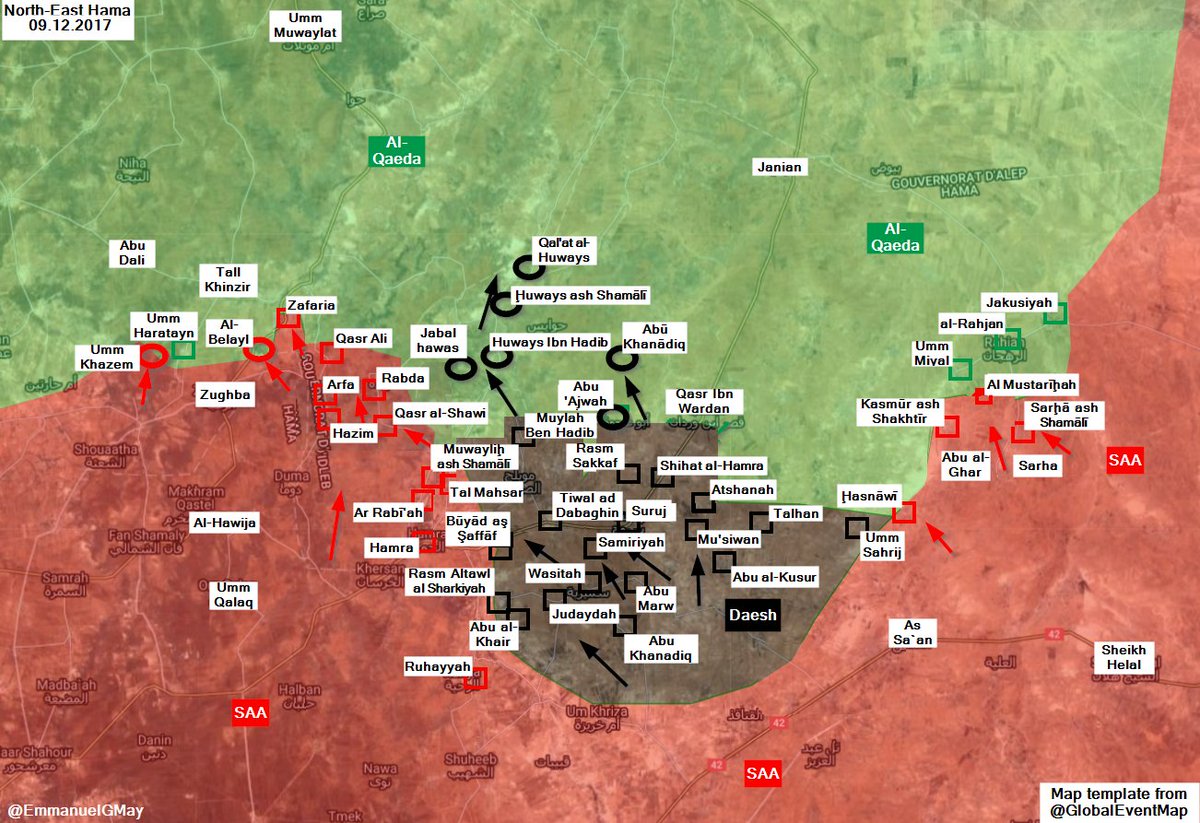 Media official of the Syrian Democratic Forces’ Deir al-Zour Military Council, Basem Aziz stated that Abu Hammam village has fallen militarily five days ago, but SDF‘s fighters didn’t enter it yet because of the resistance of the IS’ elements in the area. Aziz also said that SDF repelled IS’ attack on Suwaidan village yesterday. SDF killed 27 IS’ fighters and destroyed a vehicle and two SVBIEDs, according to Aziz.

Syrian Arab Army allegedly blew up two houses in the vicinity of Deir al-Adas, in order to monitor the movements of the Free Syrian Army’s fighters on the front lines in the “Triangle of Death” area. Commander of Liwa al-Maham al-Khasa (Special Task Brigade) of Free Syrian Army’s Al-Firqat 46 Masha (46th Infantry Division), Abu Omar Tawirish said that this is the first time SAA used this method to monitor FSA‘s movements on the front lines. According to Tawirish, there is also a significant Hezbollah presence in the locality.

Iraqi Joint Operations reported capture of more than 90 villages spanning more than 16000 square kilometers (6177 square miles) from the Islamic State by the Iraqi Army backed by Al-Hashd al-Shaabi (Popular Mobilization Units). With these advances, Iraqi forces took control of the entire Iraqi-Syrian border, from Al-Waleed to Rabiah crossing. Iraqi Prime Minister Haider al-Abadi declared the end of the war against the Islamic State in Iraq after all of the territory was captured from the group.

Islamic State entered Nuristan province’s Waygal district and clashed with the Afghan National Police in the district’s Sigil directorate. The clashes resulted in death of three ANP‘s elements and unknown number of casualties on IS’ side. Chariman of the Nuristan’s Provincial Council, Saadollah Pidindazavi confirmed the clashes between ANP and IS in the province and stated that the IS’ fighters very likely entered the province through Kunar province’s Chapa Dara district. Pidindazavi also expressed concern about IS’ presence in the province.

Islamic Emirate of Afghanistan assassinated a high-ranking officer of the National Directorate of Security, Amir Qall in Jalalabad city, at the headquarters of the security command.

Islamic Emirate of Afghanistan’s spokesman, Zabiullah Mujahid announced the capture of a strategic Afghan National Army’s checkpoint in Surki Khelo area of Qarabagh district. According to Mujahid, 15 ANA‘s elements were killed and one captured in the attack. IEA seized a US machine gun, a sniper rifle, seven US rifles, an RPG launcher, radio equipment and a large quantity of ammunition. One IEA fighter was killed in the attack.

Islamic Emirate of Afghanistan raided Afghan National Police’s checkpoint in Gelan district. The initial attacked resulted in death of one element of the ANP and injury of another. IEA also clashed with the ANSF‘s reinforcements heading towards the checkpoint, destroying a tank and causing casualties among those on board.

Islamic Emirate of Afghanistan’s landmine targeted Afghan National Army’s convoy in Khash Rod district, killing one and wounding three soldiers. IEA reported that the ANA‘s convoy is still trapped in a minefield and under IEA‘s attacks.

Islamic Emirate of Afghanistan attacked Afghan National Army’s checkpoint in Nad Ali district. The initial attack resulted in death of four ANA‘s elements. IEA also engaged the ANA‘s reinforcements on their way to the checkpoint, destroying an armored vehicle with an RPG and killing everyone on board. One IEA fighter was wounded in the encounter.