Hello and welcome to the 269th installment of the SWD.

CJTF-OIR sent another shipment of weapons to the Syrian Democratic Forces, in support of their operations against the Islamic State. Several truckes were spotted entering Syria through Semalka crossing with Iraq and on their way towards the city of Al-Qamishli.

Russian Air Force carried out four air raids over Zarzur village, near Al-Tamanah. According to the Syrian Civil Defense (The White Helmets), the air raids killed five and wounded three civilians. The wounded individuals were transferred to a hospital in Maarat al-Numaan.

Islamic State’s Amaq Agency released a statement about Islamic State’s suicide attack targeting Syrian Democratic Forces in the village of Dranj, south of Al-Omar fields. According to the Amaq Agency, 15 SDF‘s fighters were killed, three Humvees and another three vehicles destroyed, as well as a bulldozer. 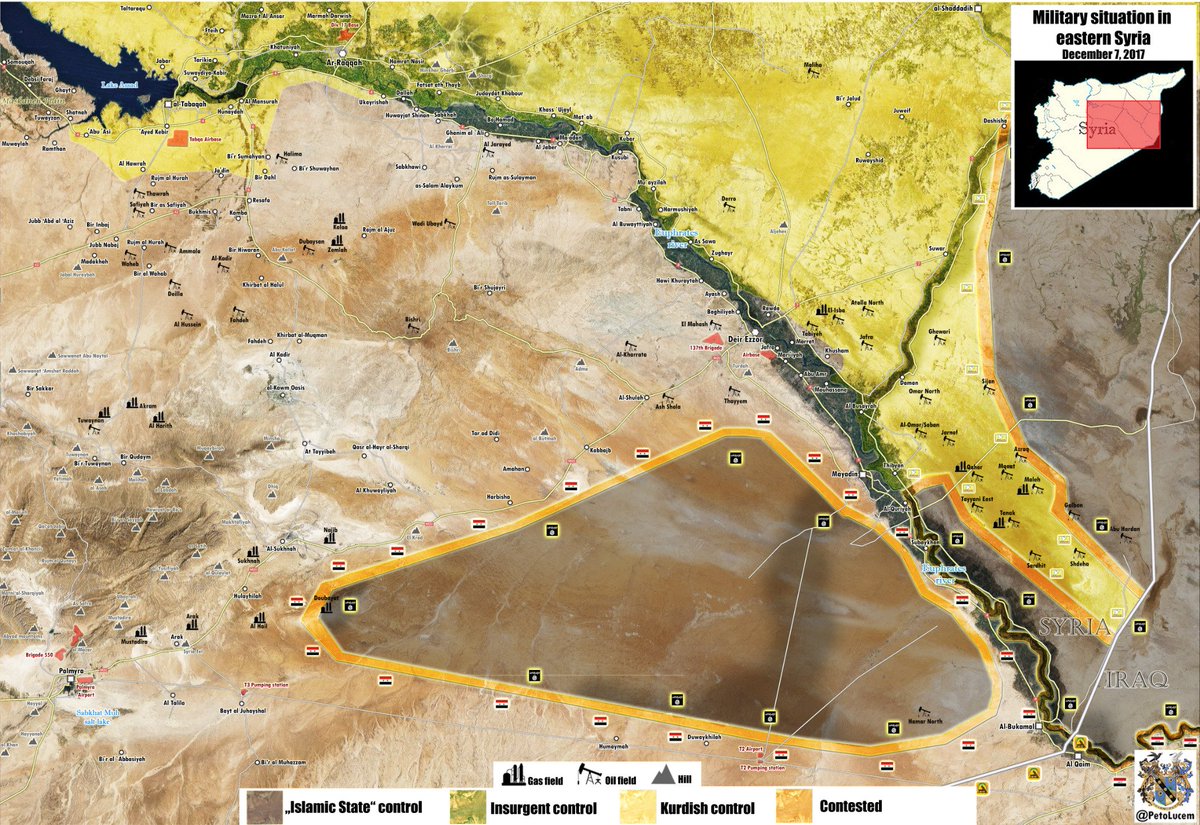 Situation in the eastern Syria, HD version of this map can be found here. Source: Peto Lucem

Syrian Arab Army’s artillery shelled Harasta, Ain Terma, and Jisreen in the East Ghouta. According to the Syrian Civil Defense, 13 shells fell on Harasta and wounded a number of civilians. The shelling of Ain Terma and Jisreen was only confined to material damage.

Rebels from the Jabal al-Sheikh operations room based in Beit Jinn pocket destroyed Syrian Arab Army’s weapons depot in the city of Al-Makroussa.

Iraqi Army, backed by Al-Hashd al-Shaabi (Popular Mobilization Units) resumed their operations against the Islamic State in the western desertous part of governorate, as a part of the larger operation to clear Nineveh, Salah al-Deen and Anbar desertous areas from the Islamic State. In the initial push, the Iraqi Army’s 7th Infantry Division, 8th Infantry Division, and 9th Armored division captured 10 villages and cleared more than 7000 square kilometers (2700 square miles) from the Islamic State, according to the Iraqi Joint Operations.

The second update from the Iraqi Joint Operations stated that the Iraqi forces cleared 35 villages and 4300 square kilometers (1660 square miles) from the Islamic State in the western Nineveh.

Afghan National Security Forces conducted operations in Imam Sahib against the Islamic Emirate of Afghanistan, killing 12 of the latter’s fighters and wounding additional ten, as well as destroying two headquarters and six positions. Islamic Emirate of Afghanistan’s version of the events in Imam Sahib district states that the clashes broke out in the district after ANSF tried to advance in several areas, such as; Kergan Tuba, Gargzu, Biggam, and Ismael Qashlaq. According to the IEA, ANSF weren’t able to advance in the region, as the clashes between the two still continue in the district. IEA stated that eight ANSF‘s elements were killed and wounded in the clashes, as well as two IEA fighters wounded.

Afghan National Army and the Islamic Emirate of Afghanistan clashed for several hours in Ab Kamari district, resulting in the injury of two former’s elements and one of the latter’s.

Afghan National Security Forces wounded two fighters of the Islamic Emirate of Afghanistan during the operations in the province.

Improvised explosive device exploded in a mosque in Momand Dara district, during the Friday prayers. The explosion killed the mosque’s imam and wounded eight people.

Afghan National Security Forces killed six fighters of the Islamic Emirate of Afghanistan during the operations in Jaji Ariob directorate.

Islamic Emirate of Afghanistan ambushed Afghan National Army’s soldier in Maruf district. The attackers captured the soldier and also seized his weapon and a motorcycle.

Between the 4th and the 7th of December 2017 CJTF-OIR has conducted 14 strikes in Syria. CJTF-OIR‘s main focus in Syria at the moment is Deir al-Zour-Albu Kamal region where they did 14 strikes supporting SDF‘s operations against IS destroying three IS fighting positions, 17 IS watercraft, an improvised explosive device, an IS line of communication, two IS headquarters, a heavy weapon, an IS motorcycle, and two IS vehicles.