Hello and welcome to the 266th installment of the SWD.

Harakat Nour al-Deen al-Zenki held an exchange deal with the Syrian Arab Army near Halab al-Jadida neighborhood, west of Aleppo. The two sides exchanged bodies of two killed fighters, one belonging to the Syrian Arab Army and the other to the rebel forces. HNDZ‘s spokesman Captain Abdul Salam Abdul Razak said that the exchange was organized after the father of the killed rebel fighter asked Syrian Arab Army to hand over the body.

The local council of Qabasin accused Free Syrian Army’s Al-Jabhat al-Shamiyah (The Levant Front) of arresting the director of the medial office in the locality. The Levant Front officially denied that its elements arrested the director.

Hayat Tahrir al-Sham recaptured Al-Rashadiyah and Hijara from the Syrian Arab Army, south of Khanaser. HTS‘ commander, Edi Abu Faisal said that 15 SAA‘s soldiers were killed and wounded in the clashes, as well as a fighter of HTS wounded. Abu Faisal also said that HTS seized a tank (T-72) and a BMP.

Left over Islamic State’s improvised explosive device killed two civilians in the city of Raqqa. The incident occurred in Al-Fardoud district, as the civilians were inspecting their house. 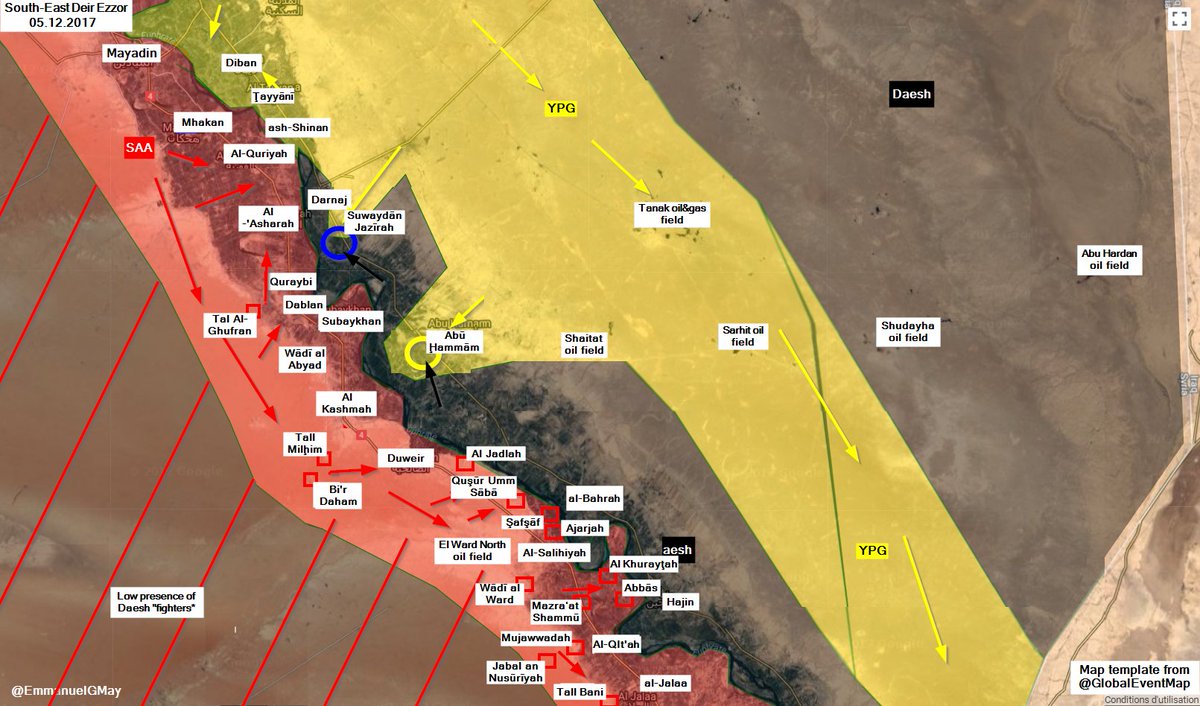 Last night, Israel Defense Forces launched several surface-to-surface missiles on a scientific research center near the town of Jamraya. Reports suggest that the center was destroyed, along with an S-200 surface-to-air missile system. Syrian Arab News Agency reported that three Israeli missiles were intercepted and destroyed.

Two Free Syrian Army’s factions, both belonging to the Syrian Revolutionaries Front clashed between themselves after a dispute. One fighter of Liwa Ahrar al-Joulan was wounded as the group clashed with Liwa Muadh bin Jabal. The leader of Liwa Ahrar al-Joulan, Abu Mustafa said that the clashes occurred between the groups after Liwa Muadh bin Jabal stole weapons from the group and tried to sell them.

Islamic State’s sniper reportedly killed an element of Al-Hashd al-Shaabi in Al-Eazim area, according to the Amaq Agency.

Islamic Emirate of Afghanistan ambushed Afghan National Police’s convoy in Bagh Shrakt area in the center of the province. The ambush resulted in death of six ANP‘s elements and destruction of a vehicle.

Islamic Emirate of Afghanistan killed one and wounded two soldiers of the Afghan National Army during a raid on the latter’s headquarters in Charkh district.

Islamic Emirate of Afghanistan ambushed an Afghan National Army’s soldier in Ghoryan district. The soldier was killed and his assault rifle seized.

Afghan National Army tried to advance against the Islamic Emirate of Afghanistan in Alisher directorate. The advance was addressed by the IEA fighters and ANA was forced to withdraw from the area.

Islamic Emirate of Afghanistan released Afghan National Security Forces’ casualty numbers for the clashes between the two in Xuan, Konsak, Granin Ghanjabad, Khawaja Khader and Qal Qalaa areas in Ablak directorate, Bala Buluk district, which lasted eight days. According to IEA, 35 ANSF‘s elements were killed and 42 wounded, as well as 11 vehicles destroyed. IEA‘s casualties for the clashes are one killed and 11 wounded.

Islamic Emirate of Afghanistan assassinated administrative director of Arghandab district, called Haji Mohammed in the city of Kandahar. The assassination took place near the victim’s house, after which the IEA fighters retreated to their positions without any loses.