Hello and welcome to the 264th installment of the SWD.

Free Syrian Army’s Al-Jabhat al-Shamiya (The Levant Front) opened negotiations with the Syrian Democratic Forces regarding the release of prisoners in exchange for SDF‘s fighters. The front’s spokesman, Baraa al-Shami stated that they started negotiations to free FSA‘s fighters and civilians detained by the SDF in Afrin and Manbij.

During the removal of the rubble in Al-Badu neighborhood in Raqqa, bodies of six civilians were found. The civilians were supposedly killed by a CJTF-OIR‘s airstrike on the city, two months ago.

Vehicle-Borne improvised explosive device exploded in the city of Idlib, in the vicinity of the industrial zone, near Al-Mihrab roundabout. Syrian Civil Defense’s (The White Helmets) element in Idlib, Abu Ahmed said that the explosion of a pickup killed four and injured two civilians.

Syrian Arab Army conducted a shelling of several localities in the rebel Northern Homs pocket, such as Talbiseh and Al-Ghantu. One fighter of the newly-formed Free Syrian Army’s Jaysh Homs was killed by the shelling of Talbiseh, the group’s main area of operations.

Syrian Democratic Forces, backed by the CJTF-OIR‘s airstrikes took control of the village of Dranj from the Islamic State. Clashes continue between SDF and IS in Abu Hammam and Al-Kashkia villages.

Syrian Democratic Forces reported the capture of the entire eastern countryside of Deir al-Zour from the Islamic State, with the help of CJTF-OIR and the Russian Air Force. However, this statement is incorrect as the Islamic State still maintains presence in several areas in the eastern Deir al-Zour governorate. 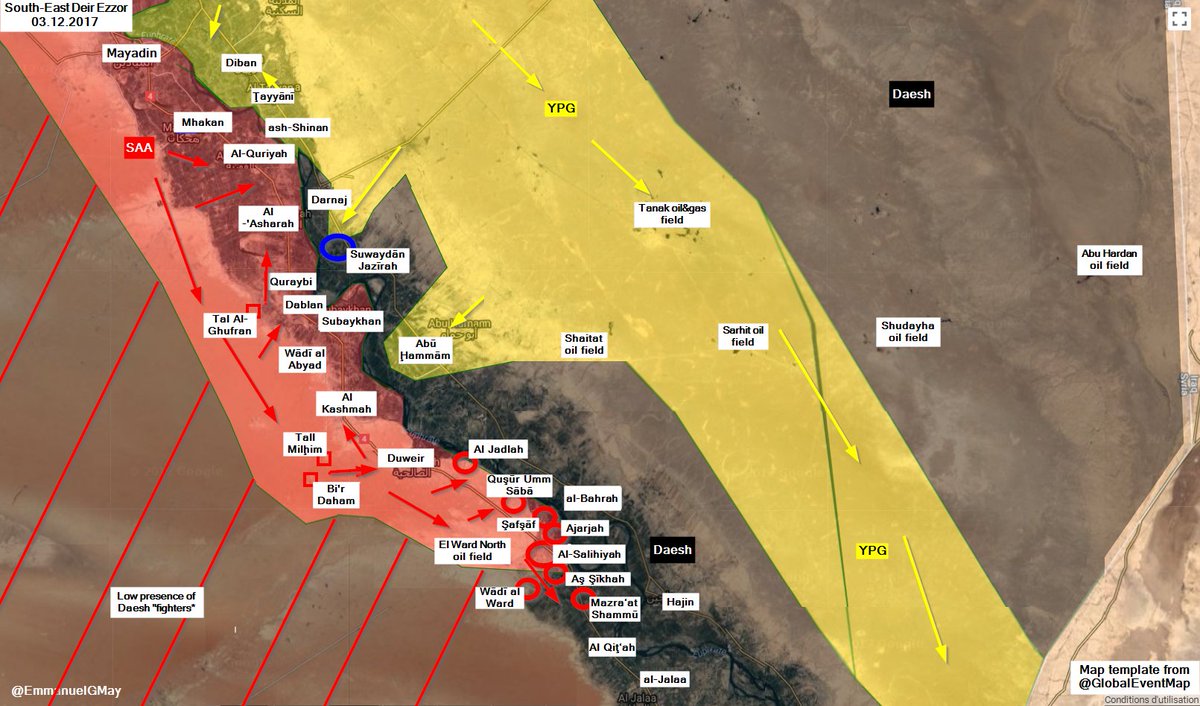 Syrian Arab Army’s artillery shelled Harasta, Madaya, Mesraba, Saqba, and Hammouriya in the East Ghouta. Syrian Civil Defense reported death of a civilian in Harasta due to the shelling.

Islamic State’s sniper killed an element of the Free Syrian Army in Yalda, southern Damascus, according to the Amaq Agency.

Syrian Arab News Agency reported that around 100 people in Shara village, Al-Lajat area, settled their cases with the Syrian government. Out of those 100 people, 40 were reportedly the fighters of the Free Syrian Army’s Al-Wiyat al-Omari.

Jordanian Security Forces freed a Jordanian citizen kidnapped by the rebels in the southern Syria. The abducted civilian was transported to his family in Irbid Governorate, Jordan. The rebels reportedly tortured the individual and demanded ransom for his release. However, Jordanian Army’s General Command did not release the name of the rebel group that kidnapped the individual nor where the kidnapping took place.

Islamic State’s sniper killed Iraqi Army’s soldier in Al-Waqf area northeast of Baqubah, according to a statement from the Amaq Agency.

Iraqi Security Forces foiled a suicide attack in Al-Tarmiyah area. The attacker was arrested, his explosive belt defused and a grenade and a pistol seized.

Islamic Emirate of Afghanistan kidnapped five people from Qadis district. However, one of the kidnapped individuals was killed by the IEA after he was identified as a police officer.

Afghan National Security Forces’ operations against the Islamic State in the province, resulted in six dead IS’ fighters and one wounded.

Islamic Emirate of Afghanistan’s spokesman, Qari Mohammad Yousef Ahmadi announced that the Islamic State’s deputy leader in Afghanistan, Abdul Razaq Mehdi defected to the IEA. Razaq Mehdi was responsible for the communication and coordination of IS’ fighters between Iraq and Afghanistan. Razaq Mehdi reportedly called all fighters of IS to join IEA.

Islamic State’s fighters assassinated an element of Afghan National Police in the city of Jalalabad.

Islamic Emirate of Afghanistan launched an attack against the Afghan National Army in Dizk region, reportedly killing six ANA‘s elements. One IEA fighter was killed in the attack.

Afghan National Army’s soldier surrendered himself to the fighters of the Islamic Emirate of Afghanistan in Shah Joy district.

Islamic Emirate of Afghanistan raided Afghan National Army’s checkpoint in Jerash directorate. The raid resulted in death of three ANA‘s elements and destruction of a checkpoint.

Islamic Emirate of Afghanistan’s improvised explosive device targeted the vehicle of the commander of the second police station in Kandahar, known as Nani. The explosion destroyed the vehicle, wounded Nani and killed two of his bodyguards.

Six Islamic Emirate of Afghanistan’s improvised explosive devices targeted Afghan National Army’s convoy between Salami and Arug points in Khakrez district. Four ANA‘s vehicles were destroyed by the explosions and elements on board killed or wounded.