Hello and welcome to the 263rd installment of the SWD.

Hayat Tahrir al-Sham and Free Syrian Army’s factions captured Khirbet Hawish, south of Khanaser from the Syrian Arab Army. HTS‘ commander, Edi Abu Faisal stated that the clashes are still ongoing at the outskirts of Khirbet Hawish and Tallat al-Rahsadiyah. According to Abu Faisal, dozens of SAA‘s elements were killed in the clashes, as well as  two tanks, a ZSU-23-4 (Shilka), and a Kornet anti-tank guided missile launcher captured.

Free Syrian Army’s Jaysh al-Izza destroyed Syrian Arab Army’s ZSU-23-4 (Shilka) with a TOW missile on Abeisan front, as the SAA tried to advance on it.

Several left over Islamic State’s improvised explosive devices exploded in the city of Raqqa, causing civilian casualties. One civilian was killed as he was searching his house on Al-Wadi street. Similarly, a civilian was killed by the explosion in Al-Quwatli street during a visit to his house. The explosion near Al-Dala roundabout in the Raqqa city’s center injured a woman in her house. 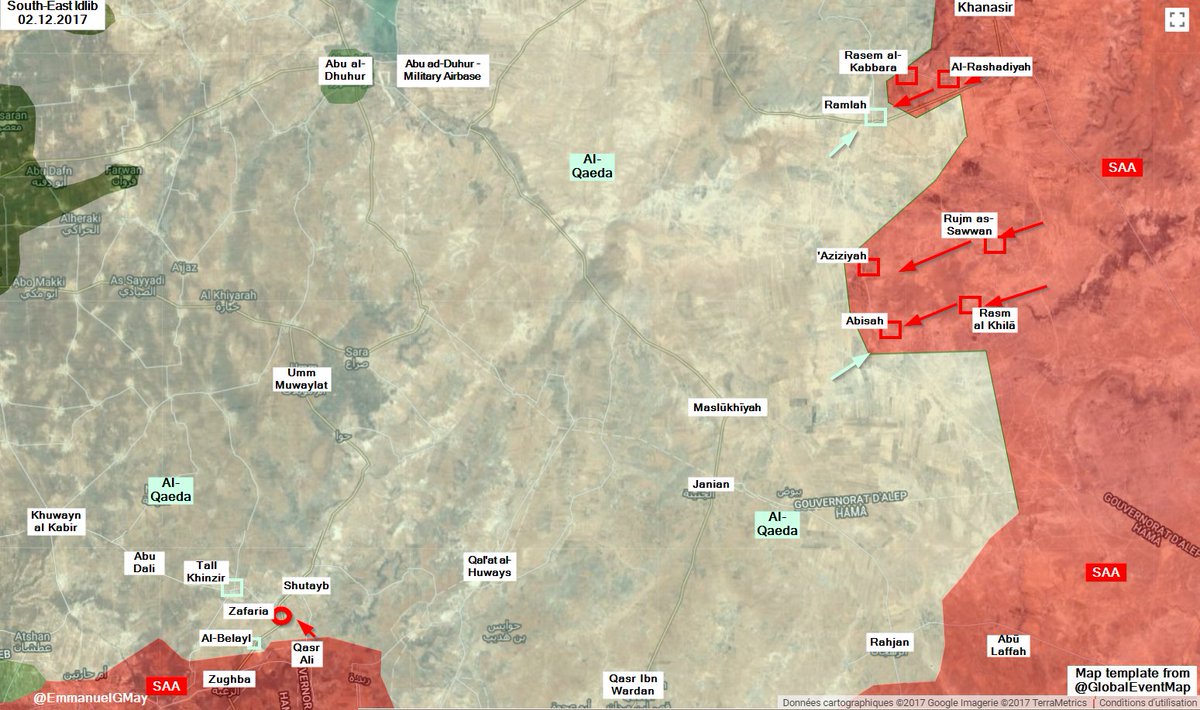 Hayat Tahrir al-Sham arrested two individuals in the eastern part of Al-Hawla area, Northern Homs pocket, on the charges of belonging to the Islamic State.

Syrian Democratic Forces captured Suwaidan village from the Islamic State. The capture of the locality was confirmed by the leader of the SDF‘s Deir al-Zour Military Council, Ahmed al-Khubail, who also stated that the clashes with the Islamic State are still ongoing in Abu Hammam village, even though the village was announced as captured by the SDF‘s official website yesterday.

Islamic State killed several Syrian Arab Army’s element and took control of the barracks after the attack on the village of Al-Duwair southeast of Al-Mayadeen, according to the Amaq Agency. 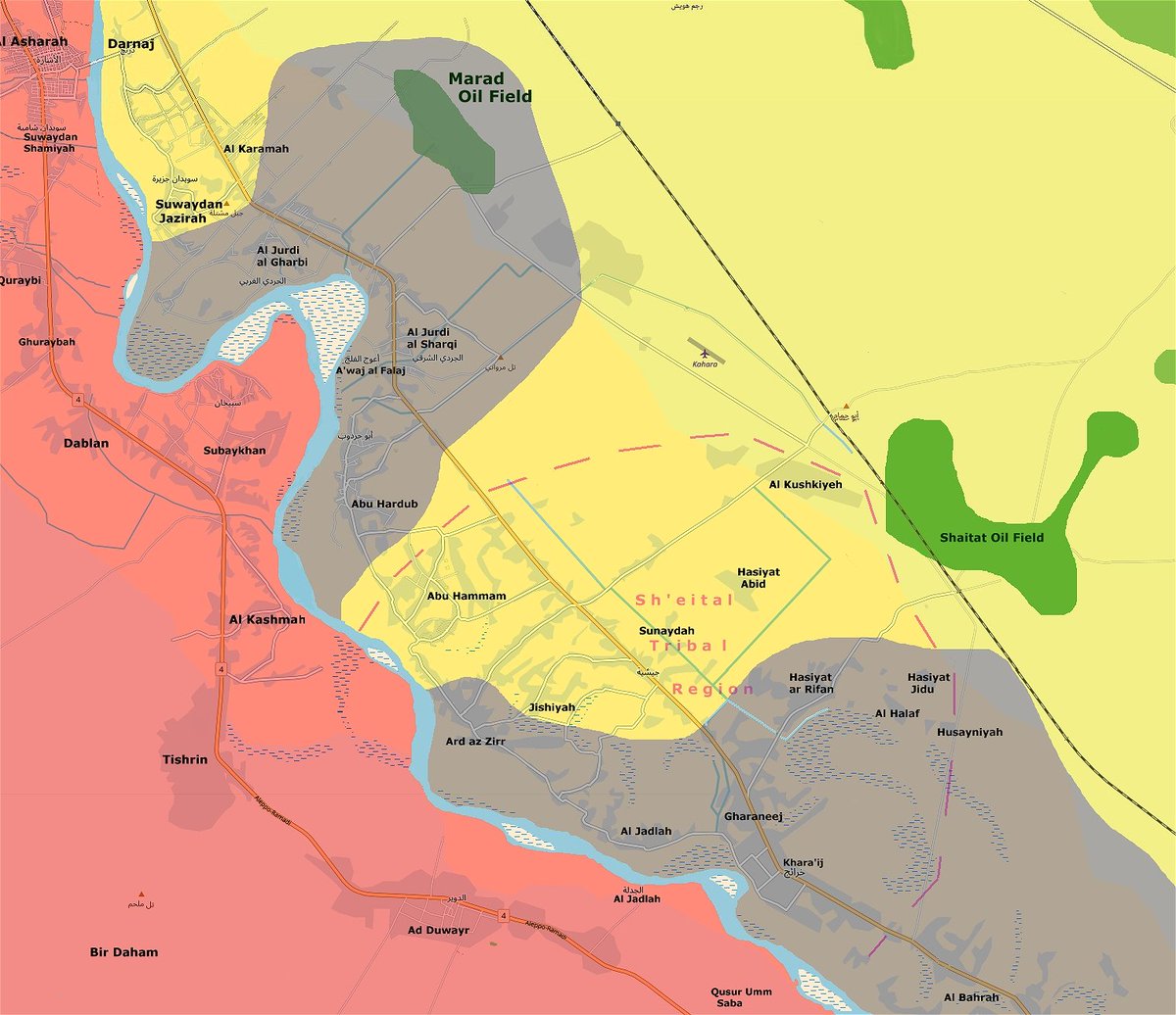 Syrian Arab Army’s artillery targeted Mesraba, Hammouriyah and Douma, wounding nine civilians in the aforementioned localities, according to the director of the Syrian Civil Defense’s information office in the East Ghouta, Abu Yamen.

Free Syrian Army’s Jaysh Tahrir al-Sham released a video statement today about several brigades and subgroups of Quwwat al-Shahid Ahmad al-Abdo (Forces of Martyr Ahmad al-Abdo), Jaysh Usud al-Sharqiya (Lions of the East Army), and Saraya Ahl al-Sham (Company of the People of the Levant) joining their ranks in Eastern Qalamoun. It is important to note that the aforementioned groups did not fully join Jaysh Tahrir al-Sham, only parts of the groups joined.

Last night, Israel Defense Forces fired several surface-to-surface missiles on a military base built by Iran in the vicinity of Al-Kaswah, and on the 91st Brigade (Al-Liwa 91) near Kanaker. Syrian Arab News Agency reported that the Syrian Air Defense destroyed two missiles fired by the Israel.

Rebels from the Jabal al-Sheikh operations room reportedly recaptured three points on Tell al-Baradiyah from the Syrian Arab Army. The recapture was reported by the member of the media office in the operations room, Abu al-Yaman. According to Abu al-Yaman, a dozens of SAA‘s elements were killed and wounded, while the rebels lost only one fighter. However, several sources reported that the SAA still has full control of Tell al-Baradiyah, so the hill should be considered as disputed, until either side provides evidence of the control.

Unknown individuals planted an improvised explosive device at the outskirts of Ibta, which exploded as a group of civilians was passing by. One civilian was killed and three wounded by the explosion. The wounded individuals were transported to a hospital in Dael.

Improvised explosive device targeted several leaders of the Free Syrian Army’s National Front for the Liberation of Syria at Ayn Zewan bridge, near the village of Suissa. According to the general coordinator of the front, Abu Mohammed al-Akhtabuta, no one was injured in the explosion, which occurred about 150 meters (164 yards) from the meeting place of the 25 leaders in the front from Daraa, Damascus and Quneitra governorates.

Islamic Emirate of Afghanistan reported death of four and injury of six ANP‘s elements due to a confrontation in Giro district, possibly related to the ANSF‘s operations in the district. IEA also stated that two of its fighters were wounded.

Afghan National Army and the Islamic Emirate of Afghanistan clashed in Bala Buluk district for a few days. According to the ANA‘s sources, 12 IEA fighters were killed and 21 wounded in clashes, as well as six improvised explosive devices defused. IEA‘s sources reported death of four ANA‘s elements, injury of additional 11 and destruction of two tanks. IEA‘s casualty numbers for their own fighters during the clashes are three wounded and one killed.

Afghan National Security Forces conducted operations against the Islamic Emirate of Afghanistan in the province, killing four fighters and destroying a weapons cache.

Afghan National Army’s soldier surrendered himself to the fighters of the Islamic Emirate of Afghanistan in Shorabak district.