Hello and welcome to the 259th installment of the SWD.

Free Syrian Army announced the formation of the Al-Faylaq al-Thaani (Second corps/legion) as a part of the Syrian Interim Government’s efforts to create a unified army. Former Firqat al-Sultan Murad (Sultan Murad Division) commander, Fehim Issa was elected as the leader of the 2nd Legion, even though he personally denied rumors a few days ago. Deputy Chief of Staff of the 2nd Legion, Colonel Haitham al-Afisi said that the legion is composed of the Firqat al-Sultan Murad, Firqat al-Hamza, Liwa al-Muetasim, and Kataib al-Safwa. Formation of the second legion comes two days after the formation of the Al-Faylaq al-Awl (First corps/legion), under the control of Wael al-Mousa and composed of the Al-Jaysh al-Watani’s elements trained by Turkey.

Syrian Interim Government announced that its military structure will consist of three legions, Faylaq al-Jaysh al-Watani, Faylaq al-Sultan Murad and Faylaq al-Jabhat al-Shamiyah. After the restructuration of the rebel groups and formation of all the legions is done, Euphrates Shield area should have around 25 thousand fighters, according to Al-Afisi.

Syrian Arab Army reportedly targeted a vehicle in Kafr Hamrah with a “thermal missile”, wounding two civilians. The wounded civilians were transferred to a hospital in Darat Izza. 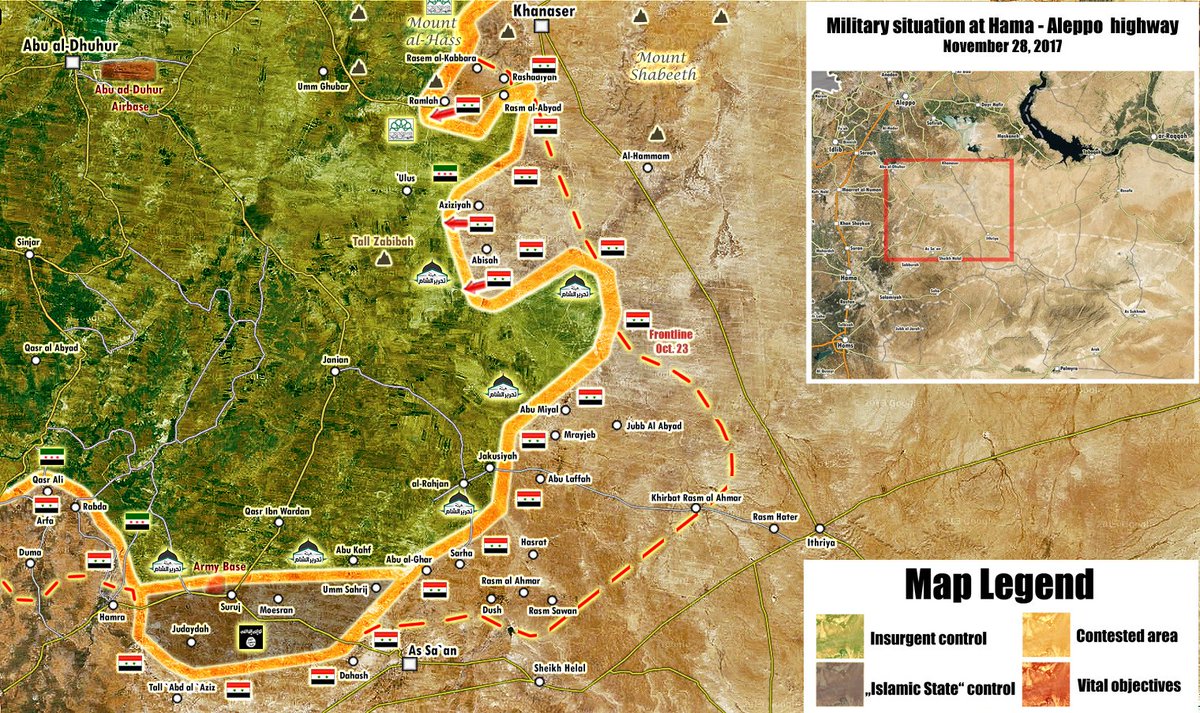 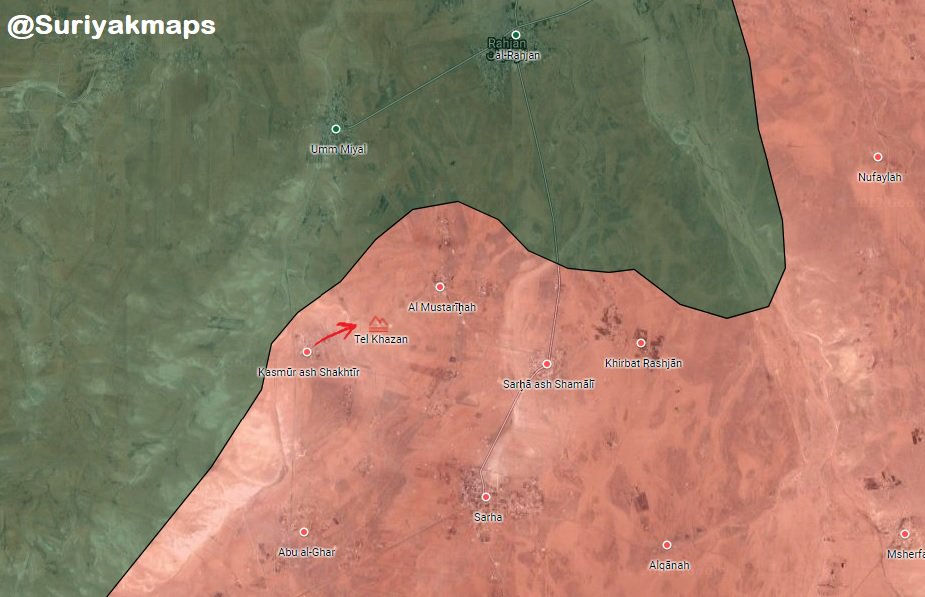 Syrian Ministry of Defense announced the capture of Al-Quaraya from the Islamic State. After this advance, SAA completely captured the IS’ pocket between Al-Mayadeen and Al-Bukamal (Albu Kamal).

Two Islamic State’s improvised explosive devices killed two and wounded another two civilians in the SDF-held village of Al-Shuhail. The wounded individuals were transported to a hospital in Al-Hasakah. 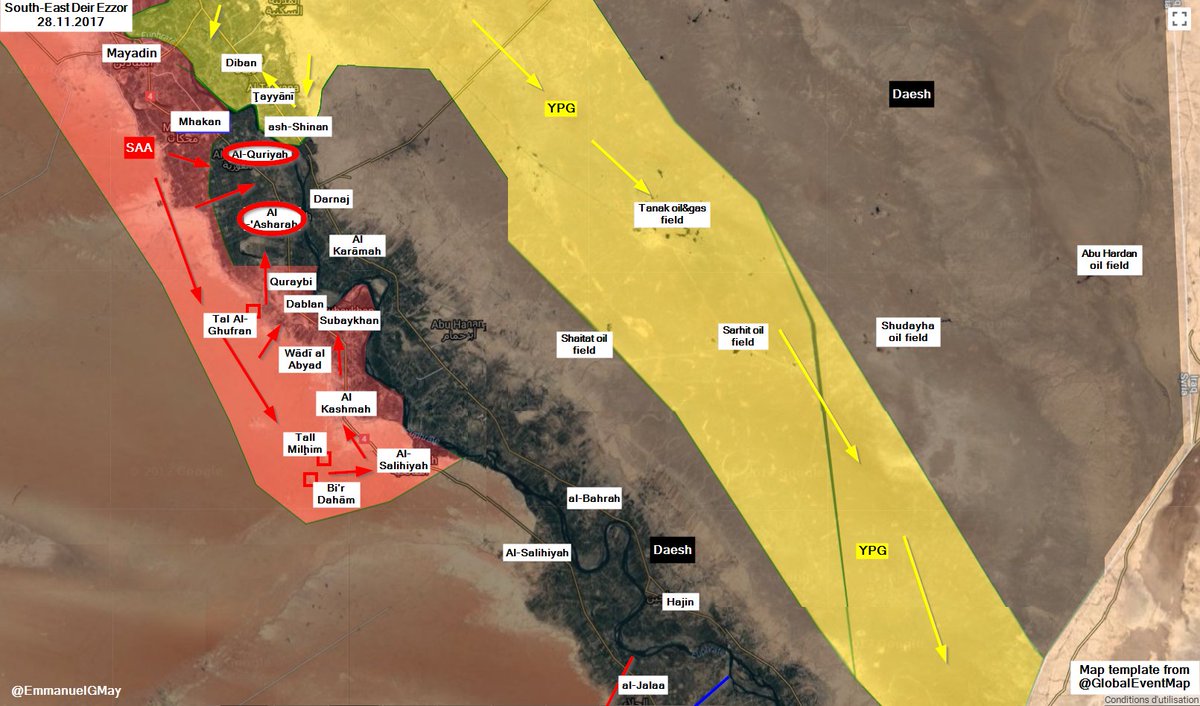 Ahrar al-Sham repelled Syrian Arab Army’s attack on its positions in the ‘Army Armored Vehicle Base’ in Harasta. Ahrar al-Sham’s spokesman for the East Ghouta, Mundhir Fares stated that a number of SAA‘s soldiers were killed and wounded in the latest attack, without specifying the casualty numbers.

Rebel “Daraa Martyrs Documentation Office” reported death of a Hayat Tahrir al-Sham’s fighter from Daraa, due to clashes with the Syrian Arab Army at the outskirts of Beit Jinn.

Syrian Arab Red Crescent in cooperation with the United Nations delivered humanitarian aid convoy consisting of nine trucks to the city of Al-Nashabiyah. The aid will be distributed by the local council, under the protection of Jaysh al-Islam. The humanitarian aid convoy was supposed to reach Al-Nashabiyah on the 26th of November, but was postponed due to the shelling in the area and overall unstable security situation.

Free Syrian Army started a new offensive against the IS-affiliated Jaysh Khalid ibn al-Walid in the southeastern Daraa. The offensive is named “People of the Land” (Ahl al-Ard) and so far only two factions are participating in it, Tajammu al-Ahrar and Tajammu al-Shahid Abu Hamza al-Naeimi. FSA‘s offensive started on Tasil axis, with the rebels capturing JKW‘s first line of defense, Al-Zahriya bunker and two other points in Tasil’s vicinity; Al-Safadi farm and the warehouses. The capture of the aforementioned positions was confirmed by the commander of Tajammu al-Ahrar, Abu Yazen al-Jabiliya. For what it’s worth, IS’ Amaq Agency released a statement claiming that FSA‘s attack on Tasil was repelled.

Improvised explosive device targeted Free Syrian Army’s vehicle on the road between Mulayha al-Sharqiya and Sama. The leader of the FSA‘s Al-Wiyat Aswad al-Badiyah, part of the National Front for the Liberation of Syria, known as Abu Rakan stated that the explosion wounded a commander of the Liwa 170 and two fighters from Al-Wiyat al-Omari. Abu Rakan also stated that the investigation is ongoing to determine the perpetrators of the act, according to Abu Rakan, Syrian Arab Army is likely to be responsible.

Islamic Emirate of Afghanistan’s (Taliban) spokesman, Zabiullah Mujahid announced capture of four outposts and two checkpoints from the Afghan National Army in Neshar area of Bilchiragh district. According to Mujahid, three soldiers were killed and four captured in the attack, as well as nine weapons and 20 motorbikes seized.

Islamic Emirate of Afghanistan shelled the governor’s office during a meeting between several Afghan officials and the commander of the NATO-led Operation Resolute Support, General John William Nicholson Jr. The shelling disrupted the meeting and reportedly wounded several individuals.

Islamic Emirate of Afghanistan reportedly killed a member of the militia loyal to the Afghan government and seized his weapon in Ali Abad district.

Afghan National Security Forces arrested Hezbi Islami’s commander, Ghulam Hussein Jandi and seized large quantities of heroin in the raid on the house where Jandi was hiding. ANFS seized at least 20 heroin packs and 90 bullets in the raid.

Islamic Emirate of Afghanistan captured a checkpoint from the Afghan National Army in Turku district. IEA killed five ANA‘s soldiers and destroyed two vehicles during the battles for the checkpoints, as well as seized an RPG launcher, three assault rifles, and 20 grenades.

Afghan National Army’s soldier defected to the Islamic Emirate of Afghanistan with his weapon.

Islamic State reportedly killed three Islamic Emirate of Afghanistan’s fighters, including a commander, during the clashes between the two in Kandikl district.

Islamic Emirate of Afghanistan denied reports about the execution of one of its commanders linked to the Islamic State yesterday. According to the IEA, the execution did take place, but instead of IEA‘s commander, IS’ fighter was executed.

Islamic State’s Amaq Agency reported death of three and injury of eight IEA‘s fighters, during the clashes between the two in Bira Khel area of Khogyani district.

Afghan National Security Forces foiled an SVBIED attack in Dur Baba district, killing one perpetrator during the apprehension and seizure of the VBIED.

VBIED exploded in the city of Puli Alam, as the Deputy State Police Commander, Mohammad Ayoub Warkad was passing by in a police convoy. The explosion wounded 11 people in the capital city of the Logar province, without any group claiming responsibility for the attack yet.

Afghan National Police’s element surrendered itself to the forces of the Islamic Emirate of Afghanistan.

Islamic Emirate of Afghanistan’s forces raided an Afghan National Army’s checkpoint in Jerash directorate, reportedly killing four and wounding several other soldiers. One IEA fighter was wounded in the raid.