Hello and welcome to the 258th installment of the SWD. Since majority of the people voted for the addition of Afghanistan as a region, it can be found in today’s and future dailies under the Iraq region.

Two Islamic State’s improvised explosive devices exploded in the city of Raqqa, causing casualties among the civilian population. One of the explosions killed two civilians as they were inspecting their house in Al-Dareea neighborhood, near Khalid ibn al-Walid school. The other explosion wounded two civilians in the city’s center.

Two children were killed when an unexploded ordnance exploded in one of the fields at the outskirts of Al-Lataminah. The unexploded ordnance was described as a remnant from the Syrian Arab Army’s shelling of the locality yesterday. The explosion occurred when the children tried to interact with the explosive device. 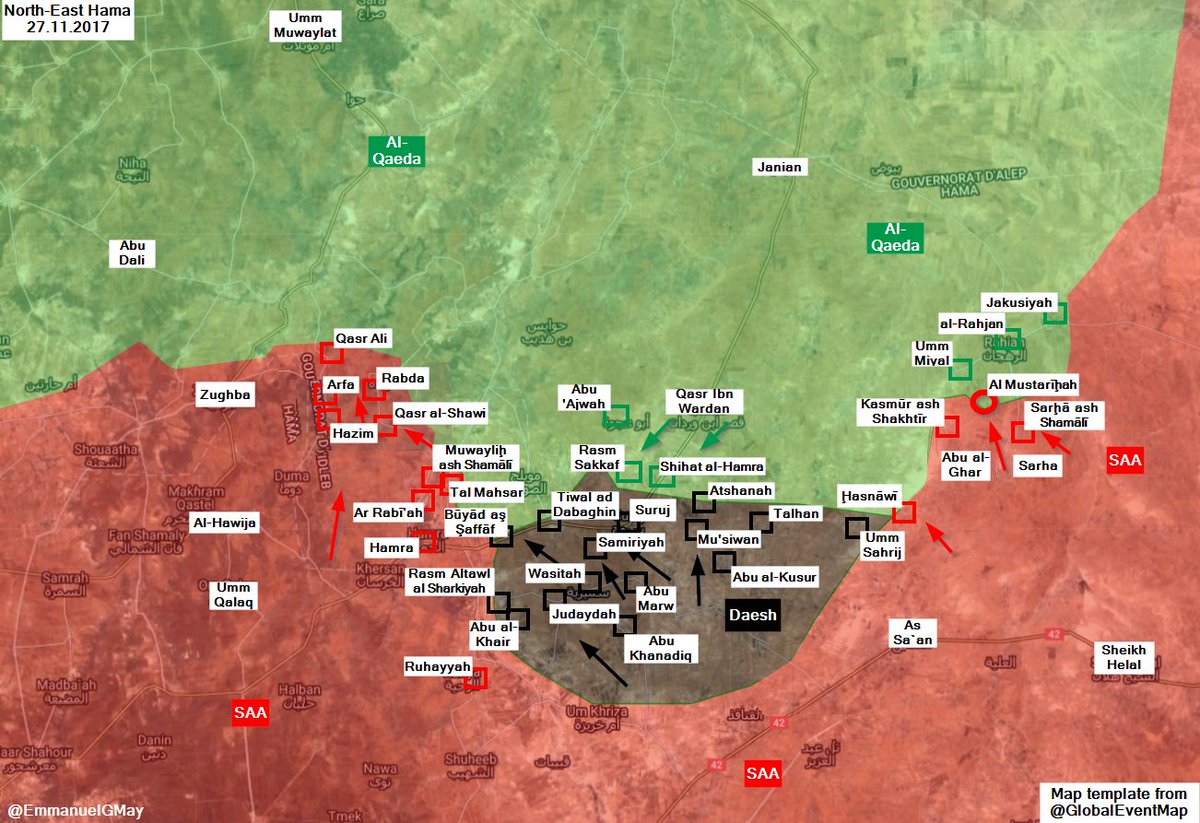 Islamic State’s SVBIED detonated at a Syrian Arab Army’s checkpoint near the eastern entrance to Al-Sukhnah. The explosion reportedly killed two soldiers and wounded several others.

Civilians started returning to the town of Markada, three weeks after the Syrian Democratic Forces captured the town from the Islamic State. The civilians were allowed to return to their houses by the SDF, after the locality was completely cleared of the IS’ improvised explosive devices. At least 1000 individuals (200 families) returned to their homes in Markada.

Situation in the eastern part of Deir al-Zour. Source: Rr016

Syrian Arab Air Force conducted a dozen of air raids over the rebel-held parts of the East Ghouta. Director of the Information Office of the Syrian Civil Defense (The White Helmets), Abu Yamen said that nine people were killed and two wounded by two airstrikes on Madyara. Four airstrikes over Mesraba and Arbeen killed four civilians in two localities, according to Abu Yamen. Three civilians were reportedly wounded by airstrikes on Harasta.

Syrian Arab Army’s shelling of Douma reportedly killed five people and wounded 22 others, as well as caused material damage in the locality.

Islamic State’s sniper killed a fighter belonging to the Free Syrian Army’s Jaysh al-Ababil in Al-Tadamon neighborhood in the southern Damascus, according to the Amaq Agency.

Rebel “Daraa Martyrs Documentation Office” reported death of two Free Syrian Army’s fighters from Daraa, due to clashes with the Syrian Arab Army at the outskirts of Beit Jinn.

The city of Jaramana officially opened a street in the honor of the recently killed SAA‘s Major General Issam Zahreddine. The opening ceremony was attended by the current mayor of Jaramana, Nazif Sharafuddin and the former mayor, Tamer Kassam. The opened street is in the eastern part of Jaramana, in Al-Naseem neighborhood.

Iraqi Security Forces in cooperation with the Drug Control Office in Al-Rusafa, arrested a group of individuals known for selling narcotics in Al-Rusafa district. During the apprehension of the individuals, security forces seized 141 various narcotic pills.

Unknown gunmen reportedly killed a member of the US-UK funded Afghan Local Police and seized his weapon in Burka district.

Afghan Ministry of Defense stated that the Afghan National Security Forces, under the support of the artillery and the Afghan Air Force, launched nation-wide operations against the Taliban and IS forces. Operations were conducted in Nangarhar, Ghazni, Paktia, Kandahar, Uruzgan, Farah, Jowzjan, Faryab, Kunduz and Helmand provinces. Afghan Air Force conducted 11 regular and 15 special operations in support of the ANSF, targeting 20 hostile positions.

Reports emerged about Taliban forces executing one of their commanders, Mouloui Shakur for allegedly having connections to the Islamic State. The execution took place in Sherzad district.

Zabiullah Mujahid, the official spokesman for the Islamic Emirate of Afghanistan (Taliban) announced the capture of Khwaja Ismail checkpoint in Charkh district from the Afghan National Army. According to the Mujahid, seven ANA‘s soldiers were killed, including a commander, as well as several weapons seized. One Taliban fighter was killed in the attack.

Last night, Taliban forces launched an attack against the Afghan National Army’s positions in Waghjan area, Mohammad Agha district. Reports suggest that four soldiers were killed and five more wounded, as well as one tank and one vehicle destroyed.

Infighting took place in Sharana, the capital of the province, between two groups of the Afghan National Police. The infighting started as a verbal dispute between a commander of a police battalion and the leader of the 1st Police Headquarters in Sharana. Three policemen were killed and 20 more wounded in the infighting.

Between the 24th and the 26th of November 2017 CJTF-OIR has conducted nine strikes in Syria. CJTF-OIR‘s main focus in Syria at the moment is Deir al-Zour-Albu Kamal region where they did two strikes supporting SDF‘s operations against IS destroying six IS vehicles and a headquarters.