Hello and welcome to the 257th installment of the SWD.

Islamic State took control of Abu Ajwah and Anabz villages from the Hayat Tahrir al-Sham, as the latter withdrew to Qasr Ibn Wardan. However, Hayat Tahrir al-Sham managed to recapture Abu Ajwah village and allegedly killed 20 Islamic State’s fighters in the process. As the clashes between HTS and IS started in Abu Ajwah and Anabz, more than 200 civilian families fled from the localities towards the camp for the displaced in Sinjar. The official at the camp for the displaced in Sinjar appealed to humanitarian and relief organizations to provide support to the displaced civilians of the Hama governorate, especially since the winter is approaching. 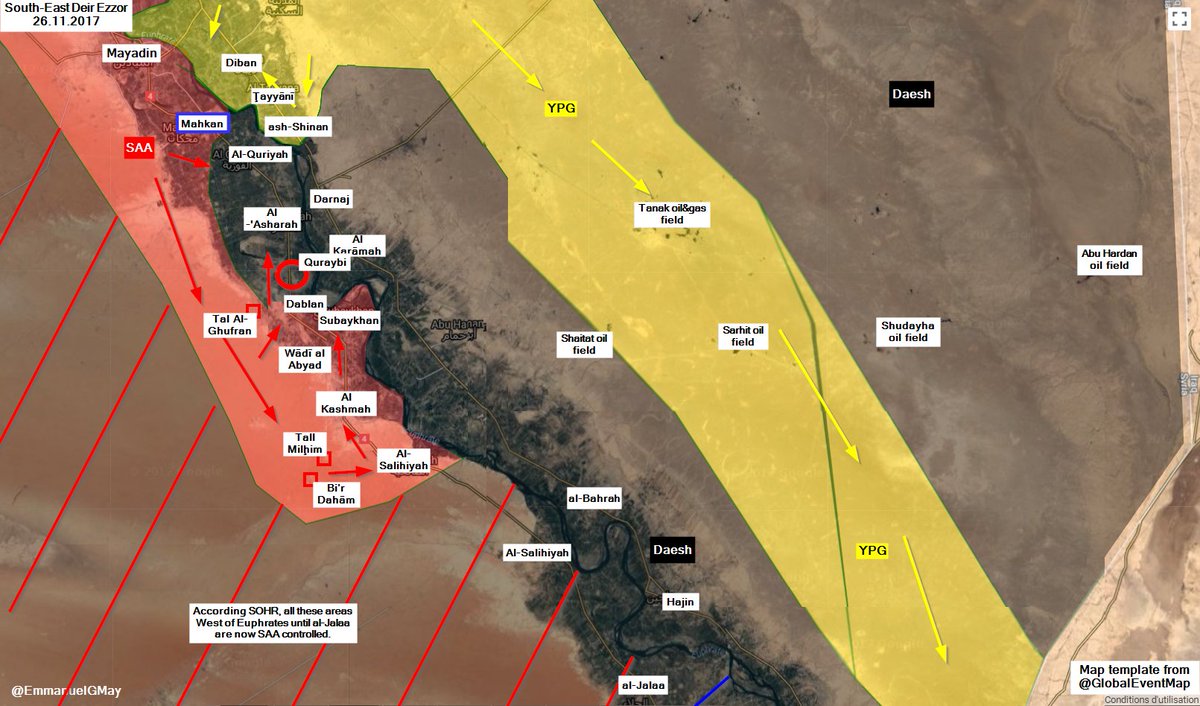 Syrian Arab Army’s Brigadier General, Ali Mohamad Badran was killed in the clashes with the Ahrar al-Sham on Harasta front.

Syrian Arab Air Force carried out a dozen of air raids over rebel-held localities in the East Ghouta, reportedly causing a significant number of casualties among the civilian population. The city of Mesraba was targeted the most, with reports indicating at least 14 people were killed and 30 wounded, as the air force hit residential areas, including a market. Syrian Civil Defense (The White Helmets) reported death of five civilians in Madyara and two more in Douma.

Rebel shelling of Al-Maydan neighborhood in the city of Damascus wounded four civilians and caused material damage to several buildings.

Syrian Arab Red Crescent and United Nations postponed a humanitarian convoy consisting of nine trucks destined for Al-Nashabiyah in the East Ghouta. The reasons for postponement are shelling in the area and overall unstable security situation.

Unknown gunmen released a volunteer from the International Rescue Commitee in Tel al-Sannin area, after he was detained for four days. The volunteer was reportedly beaten and deprived of food and water during his detainment. According to the brother of the released volunteer, gunmen demanded a 60,000 dollars ransom, which the family refused to pay.

Islamic State’s sniper killed an Iraqi Army’s soldier in Al-Eazim area, according to the Amaq Agency.

Displaced families from Al-Bawaebid, Al-Karaghul, and Al-Halabsa areas returned to their homes, under the direct supervision of the Baghdad Operations Commander and the commander of the Iraqi Army’s 6th Infantry Division, Major General Jalil al-Rubaei. The families were allowed to return to their homes, after the security forces removed improvised explosive devices planted by the Islamic State, in the aforementioned areas of Al-Kheirat subdistrict of Al-Karma district.

Clashes between the Islamic State and the Islamic Emirate of Afghanistan (Taliban) have spread to Shirzad directorate after the former made large advances against the latter in Khukhianu (Khujianu) directorate, Nangarhar province.